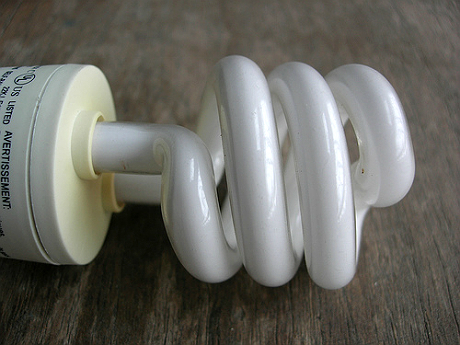 As more customers switch to high-efficiency lighting, utilities are having to look elsewhere to meet energy conservation mandates. (Photo by Dan McKay via Creative Commons)

What happens when the “low-hanging fruit” of energy efficiency runs out?

Illinois is about to find out.

After years of heavy reliance on lighting upgrades and other programs, the state’s two largest utilities, Commonwealth Edison (ComEd) and Ameren Illinois, are now coming up short on meeting state-mandated efficiency goals.

However, Illinois Commerce Commission orders released last month show there are still plenty of opportunities to further cut energy consumption, according to clean energy advocates who are part of the stakeholder group involved in the proceedings.

State law says the two utilities and a state agency that oversees public buildings and low-income energy programs must reduce energy demand by two percent each year. Complicating the situation, the utilities cannot spend more than two percent of the rates paid by customers on energy efficiency projects.

On January 28, the Commerce Commission released its response to the most recent proposals from ComEd and Ameren, demanding that the utilities step up their efficiency commitments and refile their plans in 30 days.

The commission response was informed by input from an official stakeholders group that includes the Natural Resources Defense Council (NRDC), the Environmental Law & Policy Center (ELPC), the Citizens Utility Board and the Illinois Attorney General’s office.

The NRDC, ELPC and CUB are members of RE-AMP, which also publishes Midwest Energy News.

The commission indicated the utilities will have to agree to more ambitious energy efficiency goals than they had proposed, as experts from the ELPC and NRDC explained. The commission also ordered the stakeholders to develop proposals to further guide efficiency improvements.

Rebecca Stanfield, a Chicago-based policy director for the NRDC, said the commission’s orders should mean ComEd has to increase its energy efficiency goals by about 90,000 megawatt hours more per year for three years.

Ameren and the DCEO also have efficiency targets for natural gas, which must be boosted about 33 percent and 78 percent, respectively, according to the stakeholders’ analysis.

“The [utilities] tend to lowball what they say they can achieve, so a lot of cases are about getting them to commit to targets that are more realistic,” said Stanfield.

For several years, utilities have met efficiency requirements by providing or subsidizing compact fluorescent light bulbs (CFLs) for their customers. Since these bulbs use much less energy than old-fashioned incandescent bulbs, the investment can be counted as energy efficiency spending.

But Stanfield and ELPC senior attorney Robert Kelter noted that CFLs have become commonplace now, with many customers realizing they are the more economical choice even without subsidies. And federal requirements are also kicking in that phase out production of inefficient incandescent bulbs.

Some utilities have given themselves more credit than they deserve for investing in CFLs, clean energy advocates say. But Stanfield and Kelter said ComEd and Ameren are already moving away from heavy reliance on light-bulb programs to meet their energy efficiency requirements.

“ComEd and Ameren have done an admirable job of reducing their reliance on discounting CFLs,” said Kelter. “ComEd and Ameren are only taking credit for about 40 percent of savings that bulbs generate. They’re still discounting them and selling them, but not adding it to their bottom line the way they used to, which we think is a very good thing.”

“ComEd and Ameren are really leaders,” he continued. “In Michigan, Ohio and Iowa, (utilities) are still spending a lot of resources just discounting CFLs. In Illinois we’re moving beyond that and moving into the next generation of (energy efficiency) programs.”

The ELPC and NRDC are urging ComEd and Ameren to promote energy efficiency through consumer education programs regarding smart meters and smart appliances that cut wasteful energy use. The commerce commission said the utilities should embrace such programs, and the stakeholders should help craft and oversee them.

The stakeholders are asking the utilities to invest in promoting smart appliances and thermostats that adjust automatically, for example, so that a space isn’t unnecessarily heated or cooled when no one is home. The stakeholders want the utilities to help customers find and buy appliances that fit in with the smart meter and smart grid overhauls already being implemented.

“We wanted a program educating customers on their options out there and working with manufacturers and retailers to promote these products and identify them – so if you go in the store and see a thermostat that would communicate with your smart meter, it’s labeled properly,” and you know to buy it, Kelter said. “It’s a way of jumpstarting a competitive market.”

The utilities could offer discounts on smart appliances like they have with CFLs. But that’s not necessarily the answer, the experts say.

“Just because you discount a smart thermostat doesn’t mean someone will actually program and use it,” said Kelter.

The cap limiting energy efficiency spending to no more than two percent of rate payments was written into the law to protect ratepayers and to make sure utilities didn’t spend too much money on programs that were not ultimately worth it.

But today advocates are generally pleased with how the utilities’ energy efficiency efforts have played out, and there’s significant desire for utilities to spend more than the cap amount on energy efficiency.

The Commission’s orders issued last week capitalize on that requirement and include directives that require the utilities to shift the tried-and-true CFL and behavior modification programs to the IPA portfolio, thereby freeing up significant dollars to invest in more innovative programs that produce deeper, longer-lived savings, the efficiency advocates say.

ComEd also can spend on projects under its Smart Grid program and other areas that are not considered energy efficiency programs, hence not subject to the spending cap.

For example the Commerce Commission ordered the utilities to do a “voltage optimization feasibility study,” which Stanfield and Kelter said could mean significant energy savings for customers without even changing their behavior.

“Essentially if utilities do a better job balancing electricity put on the grid it will help customers reduce the end use in their homes,” said Kelter. “If you do voltage optimization right the appliances use less electricity when they’re plugged in.”

While such a study would mean substantial gains in energy efficiency, it can and should be funded as part of grid maintenance, not subject to the cap, Stanfield said. The commission also pushed this approach, which could be reflected in the new Smart Grid plan that ComEd is required to file by April 1.

Stanfield said that under its energy efficiency programs subject to the rate cap, ComEd is reducing energy demand by about 0.8 percent. When the programs that the utility runs under the IPA procurement process are added in, efficiency gains reach about 1.4 percent, she said. That is still below the goal of two percent demand reduction, but it shows the importance of finding creative ways to invest in resources that will lower electric costs across the board.

The stakeholders also pointed to other aspects of the Commerce Commission orders that give them hope. The commission ordered Ameren and the DCEO to do a study of energy use and waste at large data centers, run by private companies and the state government, respectively. And the commission approved a pilot plan for the DCEO to incentivize combined heat and power (CHP) – the use of waste heat to generate energy – at public buildings.

The commission also asked Ameren to continue to expand an “on-bill financing” program where customers can finance their own energy efficiency overhauls essentially through a loan from the utility paid back with their energy savings. This program should be instituted through the IPA procurement process, the commission said, so that it would not count toward the rate cap.

“Weatherizing a home costs $3,000 to $5,000 – a utility can’t just give you that money,” noted Kelter. “There has to be sharing. The key is to make it easier for customers to finance it through their utility bill.”

Along with developing and funding energy efficiency programs, the stakeholders and the Commerce Commission also have stressed that meaningful evaluation is key. The Attorney General’s office has been involved in these proceedings in part to oversee the evaluation components – which are also paid for by ratepayers.

The commission asked the stakeholder group to come up with a statewide evaluation manual  “so that the utilities are all playing by the same rules,” as senior assistant attorney general Karen Lusson said.

“The commission said you have to do a better job in three areas,” said Stanfield, summing up the commission’s orders. “One, save as much energy as you can with the budget, including actually spending the budget. Two, do more innovative programs. And three, you have to consistently evaluate the results and make sure what you claim you saved you really saved.”

Lusson noted that deciding how to allocate resources for evaluation is a challenge given caps on evaluation spending under Illinois law. Newer programs might be evaluated sooner and more rigorously, she noted, and programs run by different utilities and agencies must be evaluated in a uniform way.

“We need to make sure programs are truly cost effective and that we’re ensuring ratepayers are getting what they’re paying for,” she said. “We don’t want to spend money on programs that are not working.”