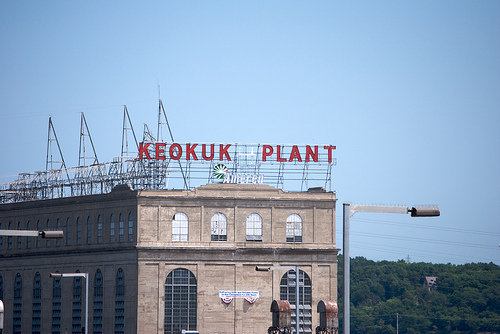 Ameren is currently meeting most of its share of Missouri's renewable energy standard with electricity from this century-old dam in Iowa. (Photo by Ian Petchenik via Creative Commons)

More than five years after Missouri residents approved a renewable-energy standard, very little has changed about the state’s power supply.

The 2008 law, known as Proposition C, requires the state’s three large investor-owned utilities to gradually phase in renewable power, starting with 2 percent of the electricity sold in 2011 to 2013, and gradually ramping up that proportion to 15 percent by 2021. The law also requires that 2 percent of that total be derived from solar.

However, not long after voters approved the law by a two-to-one margin, state officials removed language requiring that energy to be generated in Missouri.

As a result, “the utilities are not building renewables,” said P.J. Wilson, director of Renew Missouri, a non-profit that advocated for Proposition C. “They have found ways around it. We’ve been challenging that.”

A bill currently before state legislators would restore the original in-state requirement.

While Missouri utilities have in some cases invested in renewable energy, the scale of those initiatives is small compared to RES targets.

Both Kansas City Power & Light and Ameren Missouri have provided subsidies to some of their customers for solar panels. Ameren Missouri is now using electricity generated by a new landfill-gas plant in the St. Louis suburbs, and a small solar array on the roof of its St. Louis headquarters.

And KCP&L recently announced that, by early 2016, it intends to begin purchasing 400 megawatts of power from two wind farms slated for construction, one in Kansas, one in Missouri. It is also using some power generated by solar panels atop a Kansas City high school.

Apart from those investments, though, not much else has changed.

So far, two of the state’s utilities have managed to meet the standard primarily by continuing to generate power at hydropower plants that they have owned and operated for about a century.

All three of Missouri’s investor-owned utilities have met the solar requirement mostly by purchasing renewable energy credits from solar installations primarily in California and Florida.

Efforts are, and long have been, underway to change that. In December, a bill was introduced into the Missouri Senate that “would make the RES work,” Wilson said. “It would clear up the uncertainties.”

SB 598, introduced by Sen. Jason Holsman, would only allow credits for renewable energy sold directly to Missouri customers to count toward the standard.

But as long as renewable energy is being generated, does it really matter where?

According to Wilson, yes, it does. If Missouri utilities were to look in-state to satisfy Proposition C’s solar requirement, they would need to build or pay someone else to build solar capacity. At present, there isn’t enough capacity in the state to fulfill the renewable mandate.

When they go shopping for renewable credits, Ameren, KCPL and Empire Electric “buy the cheapest RECs, and those always come from existing facilities,” Wilson explained. “It’s not spurring any new development in California. There is no benefit to Missouri customers.”

Pierre Bull, a policy analyst for the Natural Resources Defense Council (NRDC), said that meeting renewable standards with credits from out of state “promotes renewable growth, in states that might have cheaper renewables.” It does not, however, fuel a renewable energy industry in states such as Missouri.

Rebecca Stanfield, a policy director for the NRDC, said there’s also the question of what sort of energy is being displaced by renewables, which can vary from state to state.

“If you’re not displacing coal, you’re not getting the maximum environmental benefit.”

About 82 percent of Missouri’s electricity is derived from coal. In California, the state where Missouri utilities get a lot of their solar credits, coal provides 7.5 percent of the state’s electricity and natural gas about 43 percent.

One of Missouri’s coal-fired plants, located outside of St. Louis, is the Labadie Power Station, identified in a report by Environment America as the fourth heaviest emitter among all U.S. power plants.

Heather Navarro, executive director of the Missouri Coalition for the Environment, suggested that if Ameren Missouri would meet the state standard by generating additional renewables in Missouri, operations – and emissions – at Labadie might be curtailed.

According to data compiled by the Lawrence Berkeley National Laboratory, the vast majority of state renewable-energy standards have a geographic stipulation.

Among the 29 states (plus Washington D.C.) that have renewable energy standards, Missouri is one of the very few without any geographic requirements, although the law provides 25 percent more credit for power produced in-state.

By purchasing low-cost solar RECs in California, Ameren Missouri is serving its customers by reducing costs that they will pay, said Warren Wood, the company’s vice-president of regulatory and legislative affairs. And furthermore, he said, Missouri’s renewable standard puts a 1 percent rate cap on spending to meet the standard.

“We are already up against that 1 percent cap,” he said.

The bill now pending before the Missouri Senate would address other issues with the renewable standard. It would allow only small hydropower plants – those with a total capacity of 10 megawatts or less – to count toward the standard. That effectively would disqualify much of the renewable power now used by Missouri utilities to satisfy the renewables standard. Ameren now uses a hydropower plant it owns on the Mississippi River in Keokuk, Iowa to meet about 80 percent of the state’s RES.

Missouri’s renewable standard is being discussed in court as well as the legislature. One lawsuit challenges the 2010 decision by the Joint Commission on Administrative Rules that removed the law’s in-state requirement.

Another lawsuit, filed on Jan. 24 with the Missouri Supreme Court, appeals a 2008 decision by the state’s Public Service Commission that allows the Empire District Electric Co. to be exempted from the solar requirements of the state’s renewable standard.

While Ameren and Great Plains Energy, KCP&L’s parent company, have spent about $150 million to subsidize customers’ installation of solar panels, none have been installed in Empire’s service area, according to the lawsuit.

While much about Missouri’s renewable standard is still up in the are yet to be determined, it is clear that, so far, it has made only a marginal difference in the state’s power picture.