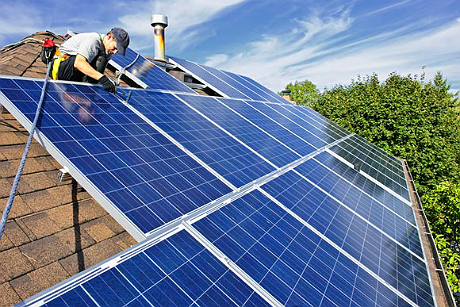 Solar installers, manufacturers, and suppliers added employees in the Midwest last year at a rate more than double the national average.

The solar industry now directly employs an estimated 17,044 people in the Midwest, according to the latest State Solar Jobs Census, released Tuesday by The Solar Foundation, a nonprofit research group. That’s a 51 percent increase from the 11,300 jobs it counted in the region in 2012.

Nationally, the number of solar jobs grew by almost 20 percent to an estimated 142,698, nearly half of which are located in Arizona, California, Massachusetts or New Jersey.

The foundation also took a more in-depth look at Minnesota’s solar industry so that it will have a baseline for evaluating the impact of that state’s recently passed solar policy, including a 1.5 percent solar mandate.

The national report has a margin of error of plus or minus 1.3 percent. It’s based on a survey of 15,437 employers who were identified through more than 73,000 phone calls and 11,000 emails to “potential solar establishments,” including installers and manufacturers, as well as suppliers and subcontractors for which solar may only account for just a portion of their total business. A solar job is defined as any one in which the employee spends at least half their work time supporting solar-related activities.

In the Midwest, every state except for Michigan outpaced the national growth rate. Iowa, Indiana, Missouri, Nebraska and North Dakota more than doubled their solar job totals, while South Dakota quadrupled its total.

Ohio solidified its spot as the region’s largest solar employer with 3,800 jobs, including 900 added between the 2012 and 2013 surveys. Missouri saw the biggest gains, adding 1,600 solar jobs.

Schoen said out-of-work tradespeople such as electricians have successfully transitioned into the solar industry. Meanwhile, public awareness about a state solar rebate program peaked in recent years. (The rebate has since been suspended by the state’s utilities.)

The Missouri solar association was founded with 10 members in 2010. Today, it has about 100 members, including 45 installation companies, Schoen said. Its current priority is improving the state’s net metering policy in hopes it will allow for steady, sustainable growth going forward, she said.

Minnesota last year passed the type of ambitious solar legislation that Schoen’s association would love to see in Missouri. The laws include new incentives, net-metering reforms, and a requirement that investor-owned utilities generate 1.5 percent of electricity from solar by 2020 (policy staff from Fresh Energy, where Midwest Energy News is based, helped shape the legislation and advocated for its passage).

Alexander Winn, manager of outreach and development for The Solar Foundation, said the report’s funders chose Minnesota as one of three states to get a more in-depth job survey in order to get an accurate “before” snapshot as the state prepares to implement the new policies.

The Solar Foundation report identified 864 solar jobs in Minnesota, a 72 percent increase from last year’s estimate of 500. Winn noted that some of that increase is likely due to a more meticulous and accurate method to identifying solar jobs in the state.

The Minnesota report’s authors heard from 3,313 employers, of which 139 completed a full survey — an “astounding” level of participation that allowed it to offer numbers with a margin of error of plus or minus 1.2 percent, lower than the national report.

The report says Minnesota has managed to build “a respectably-sized” solar market over the past decade thanks to several basic policies, including rebates and net metering. Its 864 solar jobs rank 31st out of 50 states and the District of Columbia.

“Recent substantial policy changes, however, place Minnesota on the cusp of a potential solar boom that may see total installed capacity grow by several hundred megawatts by the end of the decade,” the report says.

Lynn Hinkle of the Minnesota Solar Energy Industries Association said anticipation for that growth, along with the state’s strong manufacturing supply chain, are leading to interest from solar manufacturers who are considering setting up shop in Minnesota.

“We’re going to see an expansion not only in installation jobs but in manufacturing as well,” Hinkle said. “What’s going to happen with the solar energy standard and other legislation is it will just accelerate a growth pattern that’s already in place in Minnesota.”