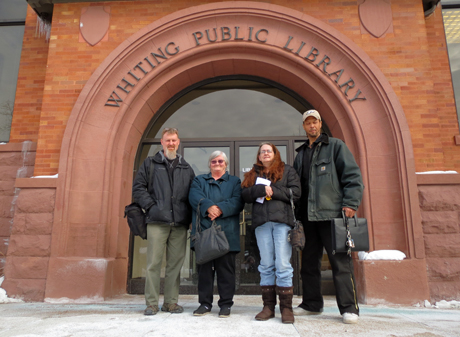 In Chicago, anger about petroleum coke storage along the Calumet River has been aimed largely at KCBX, the subsidiary of Koch Industries that operates the facilities.

Meanwhile, the BP oil refinery that creates the petcoke across the border in Whiting, Indiana has maintained a relatively low profile.

On Wednesday, during a quarterly community meeting at the Whiting public library, BP had planned to roll out its new air emissions monitoring system. But the meeting also turned into a forum for neighbors to air issues ranging from petcoke to BP’s plans to demolish homes in the area.

The fence-line emissions monitoring is the result of a consent decree stemming from a Clean Air Act lawsuit related to BP’s now-completed $3.8 billion expansion to process more tar sands oil.

BP gave residents a preview of the website that will give real time data from the monitors, which will constantly record ambient levels of volatile organic compounds (VOCs), hydrogen sulfide, sulfur dioxide and other harmful pollutants. The monitors will go live in May or June, BP officials said.

A new community website will show the air quality readings and also show the direction and speed of wind, which will help determine whether pollutants are coming from the refinery or other sources.

The site won’t provide context for whether the numbers are within safe levels, prompting one resident to say the data will “mean nothing.” BP environmental superintendent Linda Wilson explained that residents could go to websites of the Indiana Department of Environmental Management or the Environmental Protection Agency to find acceptable and legal levels of pollutants, for comparison’s sake.

Residents indicted that would not help most people easily understand the significance of BP’s readings. Another neighbor asked what the company would do when the monitors showed high ambient levels of pollutants; BP officials responded that it would help them better communicate with police and fire officials to deal with any crises.

Whiting resident and environmental activist Carolyn Marsh questioned why particulate matter, perhaps the compound with the greatest long-term health effects for nearby residents, is not measured by the monitors. BP officials noted that the monitoring plan was worked out in negotiations with citizens groups including the Calumet Project for Industrial Jobs.

“We negotiated this and we got the monitors we wanted,” said Calumet Project program director Bessie Dent.

Meanwhile Marsh and other residents blasted BP for producing petcoke and asked what the company will do if Chicago does ban expanded petcoke storage.

Whiting refinery director of government and public affairs Tom Keilman did not offer alternate plans for petcoke storage but noted that petcoke is now being transported entirely by rail, not truck or barge. In the past, 150 to 200 trucks left the plant a day carrying petcoke, he said.

“Petcoke is part of the refining process and always has been,” he added. “The old coker was pre-World War II vintage…the new coker went through the regulatory process.”

And, he added, the company expects all its vendors and contractors – like KCBX – to follow state and federal regulations.

Thomas Frank, an artist and urban policy analyst, called the increasing amounts of petcoke generated at BP “part of a larger existential threat from tar sands.”

Darryl Harris added that he thinks BP’s expansion will exacerbate emissions that he and some other residents already believe contribute to illness among locals.

“We as a community need to know what the impact and the danger is,” said Harris, a wastewater technician. “The departments of health and the universities need to study that, and not outsource it to private corporations who are controlled by big-money companies.”

The company officials also took the opportunity to announce a $500,000 contribution to the United Way and a $450,000 grant for projects under a federal diesel emissions reduction program, involving groups including the Sierra Club and Save the Dunes. But residents at the meeting offered no praise and only questioned why local groups did not receive money or have input in the grant.

Keilman explained that the environmental groups who received funds were the most active in submitting grant proposals, and are part of a larger “South Shore Clean Cities” initiative. The initiatives funded included equipment for ambulances that allow them to turn off their diesel motors but keep vital interior electronics running while the vehicles are stopped in front of hospitals.

“I’m objecting to that,” meaning the dispersal of the funds to major groups, said Marsh. “There are no local people involved and it just doesn’t settle with me.”

Residents of Marktown, a historic enclave that BP is trying to buy up and demolish near the refinery’s new coker, also turned out to denounce the company.

Keilman said BP has bought up 22 homes and is in discussions with other property owners to buy more. BP’s desire to purchase Marktown property has been divisive in the neighborhood; some residents are seeking to sell, as their home values have plummeted to under $20,000 on average.

Frank asked Keilman if he was aware of a preservation plan drawn up by residents and historians, which would preserve the one-time steel company town. Keilman said the company wants to create green space where Marktown homes now stand;  previously the company had announced its intention to create a parking lot.

“There are plenty of brownfields around BP where they could create green space,” said Frank. “The reason they want to get everyone out is that they know with the expansion the environment will become so horrific.”

Frank lamented that the historic company town of Pullman across the border in Chicago has enjoyed extensive preservation efforts and will benefit from the federally funded Millennium Reserve project, while Marktown has enjoyed no such federal support.

Kim Rodriguez noted that 2017 will be Marktown’s 100th birthday. “And I plan to still be here and have reason to celebrate,” she said.

She and other residents are worried BP will buy increasing numbers of properties that have been forfeited because of back taxes or foreclosures. Marktown proponents are upset that local or state government officials aren’t taking steps to preserve such abandoned homes rather than cooperating with BP.

“If there was a little more progress more people would join us,” in protecting Marktown, she said. “How do you put a price on 55 years of memories? Win or lose, my house is going to stand there until I die.”