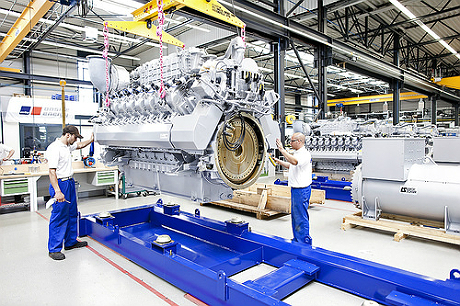 In addition to renewables, combined heat and power systems and other onsite generators may play a larger role in grid management. (Photo by Rolls-Royce Power Systems AG via Creative Commons)

In addition to renewables, combined heat and power systems and other onsite generators may play a larger role in grid management. (Photo by Rolls-Royce Power Systems AG via Creative Commons)

Here’s a sobering thought for U.S. utilities and grid planners seeking solutions for a future filled with distributed, customer-owned energy assets: that future is already here.

That’s one way to look at a striking chart presented at the DistribuTECH smart grid conference last month. It indicates that distributed energy resources (DER), far from being a tiny fraction of the country’s massive central generation fleet, may account for up to one-third of the total U.S. electricity supply by decade’s end.

But there’s a catch — this supply isn’t mostly made up of rooftop solar PV, or homes and business equipped with modern energy-saving, peak-shaving demand response technology. While those resources are growing fast, by far the biggest share of this untapped DER resource comes in the form of two decidedly un-sexy technologies: combined heat and power (CHP) systems and rarely used backup generators.

This chart indicates that there’s a much larger pool of DER than is usually recognized when one looks at solar PV or demand response on their own. It also points out that customer-sited, rather than utility-scale, power projects are expected to make up most of the incremental growth in generation capacity over the remainder of the decade.

De Martini’s purpose was to show how utilities are going to be forced to manage these growing DER resources. That’s going to require a combination of new smart grid technology developments, such as distribution operations “hubs” or “transactive energy” constructs that merge customer-owned energy assets to existing transmission grid and energy market structures, he noted.

It’s also going to require a lot of work with regulators to create pathways to incorporate all this DER into their grid planning and business operations, he said. These challenges have been front and center for distributed solar PV, with net-metering policy struggles in California and Arizona setting the stage for state-by-state debates over how solar-equipped customers and utilities should share the costs and benefits of incorporating this fast-growing resource into the energy landscape.

In the meantime, the much greater amounts of distributed energy capacity represented by CHP systems and backup generators are largely lying dormant today when it comes to grid integration. That’s because these systems most often are built to supply customers with their own power independently of the grid, as part of a campus or facility-wide energy efficiency scheme in the case of CHP, or strictly for emergency power when the grid goes down, in the case of backup generators.

Even so, there are ways that CHP systems could begin to play a much more useful role as the foundations of microgrid systems, able to offer always-on power consumption flexibility to utilities and grid operators, as well as to take themselves off-grid during emergencies. Almost all the large-scale microgrid systems that kept running amidst grid outages during Hurricane Sandy were centered around CHP systems, and New York and Connecticut are looking to invest millions of dollars to create more storm-resilient microgrids.

Backup generators, in turn, make up a significant part of the portfolios of many demand response aggregators such as EnerNOC, and they account for the vast majority of national programs like the U.K.’s Short-Term Operating Reserve (STOR). The idea isn’t to run generators all the time, but rather to call them into play at moments of grid stress, local congestion or peaking energy prices.

Indeed, some utilities, such as Portland General Electric in Oregon and Madison Gas and Electric in Wisconsin, have programs that dispatch them to meet critical grid needs, De Martini noted. Demand response company Blue Pillar got its start testing the readiness of hospital backup generator systems, and has since moved into building-wide, grid-interactive energy management systems based around emergency power supplies.

How can on-site diesel-fueled generators, or even natural gas-fired microturbines, be a green alternative? De Martini noted that the latest systems from big CHP providers such as Tecogen and big backup generator companies such as Generac are able to meet stringent air-quality standards.

They can also be quite useful to mitigate the intermittency of solar and wind power as compared to conventional large-scale generation, according to the Department of Energy’s National Renewable Energy Laboratory. That’s largely because they come in bite-sized versus megawatt-scale increments, and don’t lose lots of their power to transmission and distribution line losses.

One thing’s for sure: DER is out there, it’s coming on-line at a rapid pace, and there ought to be a way to integrate it into the overall energy infrastructure, whichever forms that takes. Vanguard energy markets like California are already working on ways to integrate these grid-edge resources into their traditional grid capacity and reliability planning methods, and Japan and Germany are arguably even further ahead.

And, as De Martini told his DistribuTECH audience, “Suffice it to say, if you don’t have quality and reliable data coming out of the field, it’s going to be next to impossible to manage in this kind of domain” for utilities.