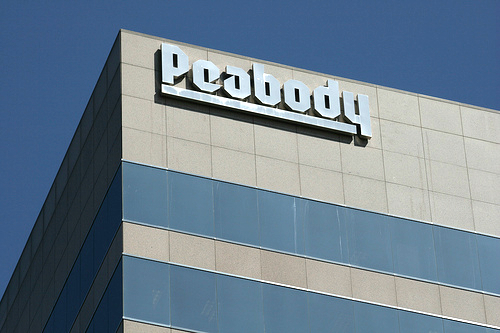 A debate in Minnesota about the social and environmental costs of power plant pollution has caught the attention of the world’s largest private-sector coal company.

Peabody Energy wants a seat at the table as Minnesota prepares to update a two-decade-old figure that’s meant to help inform planning decisions about electricity generation in the state.

The coal giant said Tuesday in a petition to Minnesota utility regulators that the outcome of the case will affect its business, and that no one involved in the process is currently representing its interests.

The company, which is based in St. Louis, sells more than 190 million tons of coal per year in the United States, including 1.5 million tons last year to five Minnesota power plants.

In its filing, Peabody offered expertise on “the social benefits of carbon dioxide,” as well as information on “advanced coal plants,” carbon storage, and lifecycle comparisons between coal and natural gas.

He also said a “recent study” — presumably referring to a January report by the industry-backed American Coalition for Clean Coal Electricity  — “concludes that the benefits from fossil fuel energy outweigh the so-called cost of carbon by a magnitude of 50 to 500 times.”

The development comes after clean energy advocates successfully argued last fall that the state’s assumptions on the economic impacts of power plant emissions are “outdated and no longer scientifically defensible.”

Groups behind the push include Fresh Energy, the Sierra Club, the Izaak Walton League, the Will Steger Foundation and the Minnesota Center for Environmental Advocacy — all members of RE-AMP, which publishes Midwest Energy News.

The Minnesota Public Utilities Commission agreed in December to reopen an old case in which it originally sought to quantify the health and environmental costs associated with different forms of electricity generation.

That exercise was ordered by the Minnesota Legislature in 1993. Lawmakers wanted the commission to determine the numbers and then consider them when evaluating resource options. The initial numbers were developed in 1994 and finalized in 1997.

The figures have been annually updated for inflation nearly every year since 2001, but this is the first time the commission will broadly reexamine the values, which have potential to tip the scale against certain projects.

The clean energy groups’ case to update the state’s assumptions about the cost of emissions leans on a recent study by University of Minnesota economists Stephen Polasky and Andrew Goodkind.

Polasky and Goodkind estimated the total annual damages to human health and the environment from Minnesota power plant emissions to be around $2.1 billion — far higher than the state’s estimate of $58 million to $257 million.

The economists’ estimate includes $877 million in damages attributed to air pollutants such as particulates and sulfur dioxide. The other $1.2 billion is associated with greenhouse gas emissions.

Their numbers were based on Minnesota emissions and population data and a 2010 National Research Council report called Hidden Costs of Energy: Unpriced Consequences of Energy Production and Use.

Minnesota utilities disputed the study’s methodology as “flawed” and said opening a new proceeding on emission costs would be “premature.”

Great River Energy, a wholesale generation and transmission cooperative, submitted a critique of Polasky and Goodkind report by the Electric Power Research Institute, which receives funding from utilities.

Xcel Energy, Minnesota’s largest electric utility, argued that significant progress has been made on air pollution, and that imminent federal carbon regulations will address cost of carbon concerns.

“[W]e do not believe this issue is ripe, due to air quality improvements that have been achieved under recent and significantly more stringent air quality regulations and clean energy requirements, and the evolving federal carbon regulation that is underway for both new and existing power plants,” Xcel said in its comments.

The American Coalition for Clean Coal Electricity has also opposed the effort to reevaluate the numbers in a joint filing with the Lignite Energy Council, which represent coal interests in North Dakota.

Peabody’s request to join the process is the first to suggest the case could have interest and implications beyond Minnesota and its immediate neighbors.

The Minnesota Public Utilities Commission has reopened an investigation into “the appropriate range of externality values” for small particulates, sulfur dioxide, nitrogen oxide, and carbon dioxide.

In an order filed last week, the commission asked the Minnesota Department of Commerce and Pollution Control Agency to organize a stakeholder group to report recommendations within four months.

After that, the issue will head to an administrative law judge. The Commission hasn’t set a deadline for the investigation, but said it “will likely require more than twelve months to resolve.”