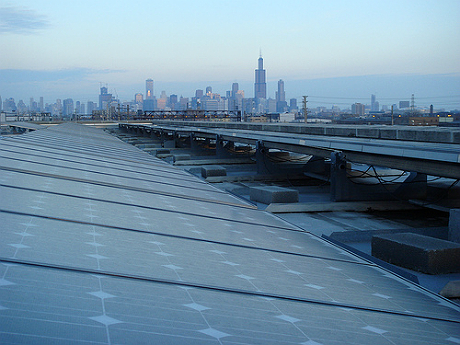 “The Chicago metropolitan market is the largest untapped solar market in the U.S.,” according to a firm that specializes in networked energy storage modules. (Photo by Jennifer Wang via Creative Commons)

When GTM Research recently looked at some of the most interesting state markets for distributed storage, Illinois did not make the top of the list.

But northern Illinois, which is the westernmost part of PJM territory, is exactly where Intelligent Generation is looking to make inroads with its behind-the-meter energy storage and software-as-a-service package.

“We are all about monetizing storage when it’s combined with solar,” said Jay Marhoefer, founder and CEO of Intelligent Generation. IG integrates client-owned storage assets with the grid to cut demand charges, as well as to provide frequency regulation or other services based on the owner’s needs.

If a grocery store in Ohio is talking to a solar developer, the store owner may find that the payback is simply too long, explained Marhoefer. A solar developer partner will then call IG, which will run analytics to size a solar system integrated with storage to serve the load so that it has a more attractive payback.

IG’s system uses data such as day-ahead pricing, demand charges, solar system data, weather forecast and a battery system’s capability to find the optimal way for the system to interface with the grid. IG takes the signal from PJM, runs its analytics to come up with the best solution, and then tells the battery what to do. IG monitors clients’ solar systems, but does not control them.

The storage and solar can first cut out demand charges, but then the storage could be used in a demand response capacity market. The rest of the year, it can be used for frequency regulation. IG’s software continuously optimizes the units for economic optimization, so that it isn’t in frequency regulation markets when it would make more money being used for economic demand response.

But IG doesn’t just bid a single grocery store’s unit into PJM. Instead, it aggregates the assets in its system so that economic payback and battery life are being maximized across all of the units. Also, grid operators like PJM aren’t that interested in a bunch of small, discrete assets. Instead, they’re interested in a fleet of assets that is represented as one larger load. Marhoefer said the company has always been about optimizing storage as a system, rather than just controlling one-off systems.

S&C Electric Company recently chose IG to bid its 150-kilowatt Kokam battery at its Smart Grid Solutions Demonstration Center in Chicago into PJM. S&C is certainly no stranger to energy markets and grid operations, but it chose to work with IG to interface with PJM instead of doing it on its own. The system will be operational this summer.

“We want to demonstrate to our customers a proven method to monetize their energy storage,” said Tim Qualheim, VP of strategic solutions at S&C.

S&C was attracted to IG in part because of the company’s hardware-agnostic approach and ease of interconnection. Many other storage startups that focus on similar solutions, such as Stem, have their own hardware solution. Others that are more focused on grid balancing, such as Viridity or Enbala, have not focused on pairing with solar.

IG has 10 megawatts of projects in its pipeline that will launch in the next year, according to Marhoefer. Most channel partners are solar developers for commercial and industrial applications. In places like Ohio or Illinois, solar often doesn’t look as attractive as it does in states with higher electricity rates and demand charges, such as New York and California.

But many mid-Atlantic and some Midwestern states fall into PJM territory, which has the most attractive pricing for fast-responding frequency regulation after implementing FERC Order 755. Other grid operators that are under FERC jurisdiction must also comply, but so far PJM is the only energy market that has seen prices rise considerably once Order 755 was implemented.

PJM is a huge territory to tackle, but Marhoefer says that there is plenty of opportunity just in the windy city. “The Chicago metropolitan market is the largest untapped solar market in the U.S.,” he said. “We want to install 10 megawatts in Chicago before anyone else knows what’s hit them.”

IG just announced a project with Continental Electrical Construction Company in Illinois to bid its 100-kilowatt battery system into PJM. The battery and solar combo is expected to pay for itself in five years using IG’s service.

IG has angel funding, but will be looking to raise a major round of funding as it scales up in 2014. Beyond PJM, the company is also keeping an eye on the neighboring Midwest Independent System Operator as its frequency regulation evolves. New York City could also be another potential short-term market.

But IG isn’t clamoring to take its system to the coast anytime soon. “The list of potential clients is getting richer every day,” Marhoefer said, adding that regional chains and distribution centers or warehouses as particularly attractive. “The greatest opportunity is the untapped markets of the heartland.”