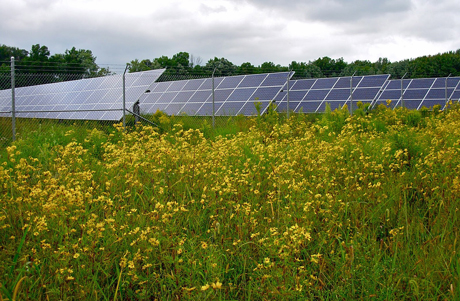 Oberlin College wanted to reduce its greenhouse gas emissions by producing solar energy, but it had no way to move the power from where it would be produced to where it could be used.

Meanwhile, the city of Oberlin’s electrical utility, with a network of power lines and a power portfolio already heavy on renewables, was also looking to further shrink its carbon footprint.

The two of them formed an unusual union, and spawned a mutually-beneficial offspring: a 2.27-megawatt solar array located on the college campus, and connected by the city utility’s distribution lines to the power grid.

What at first seemed an unlikely partnership now has yielded results well beyond expectations.

The partnership in Oberlin “is part of the larger picture of utilities…changing the way they do business,” said Bob Gibson, vice president for education and outreach for the Solar Electric Power Association, a Washington D.C.-based educational non-profit that helps utilities make greater use of solar energy.

A couple of months ago, at the end of its first full year of operation, the new solar array had:

• met about 12 percent of the college’s electricity needs
• produced about 50 percent more power than projected during hours of peak demand
• saved the utility nearly $100,000 in generation and distribution costs, translating into a slightly lower cost of power for customers
• nudged up, by nearly 3 percentage points, the proportion of the city’s energy that is derived from renewable sources.

“That’s a win for the utility, for all of the customers, and for the college,” Gibson said.

“It’s a very positive sort of thing we’re trying to advance,” said Pierre Bull, a policy analyst for the Natural Resources Defense Council. Although utilities typically “have felt threatened by these types of projects,” they can alleviate pressure on power grids, and more closely align demand and supply, he said.

Oberlin’s utility is also “very happy with the first year’s results,” said Steve Dupee, the electrical director for the City of Oberlin. “This is the beginning of a lessening reliance on a central power station, and more reliance on local distributive generation.

“What’s really unusual about it is the collaborative effort between the city utility and one of its largest electrical customers,” Dupee said. Without that, he continued, “This wouldn’t have been accomplished. We found a way in which both parties could benefit – and with very little risk to the community.”

‘There was some apprehension’

As distributed energy makes inroads, municipal power providers – like the one in Oberlin – and rural power cooperatives are taking the lead in adapting, Gibson said. He noted that they tend to be more responsive to customers, more flexible, and less constrained by state regulations than large investor-owned utilities.

The city’s electric utility, of course, figures prominently in the plan. As of 2013, 55 percent of the utility’s power came from renewable sources: primarily a couple of city landfills, which generate methane gas, and a hydropower plant. By 2015, the utility anticipates that renewables will generate 85 percent of the power sold, largely because of a several additional hydropower plants that will begin operating in 2015.

That’s where Oberlin College comes in. The college, which uses about 25 percent of the utility’s power production, wanted to install a solar array. There was one problem: the array would be located about a quarter-mile from where it would be needed.

The utility owned the distribution system, and when the college proposed collaborating on a solar array, “there was some apprehension,” recalls Ron Watts, the college’s chief financial officer.

Some large industrial customers had left, more hydropower plants were scheduled to start producing in 2015, and the utility was worried that supply would outpace demand.

Nevertheless, a deal was struck.

The college would pay $5 million to Spear Point Energy, which would install and own the system. That would essentially prepay the portion of their power projected to come from the solar array. A federal tax credit would cover the other $2.2 million. Spear Point would own the panels and collect the federal tax credits, because the college, as a nonprofit, is unable to do so.

The college signed two agreements, one to purchase power from Spear Point, and one to sell the power to the city utility.

It’s turning out to be a winning partnership for all involved. By producing most of its energy at the time of peak demand – hot, sunny summer days – the array effectively has reduced how much of the costliest power that the utility must purchase from the regional power grid.

That means the Oberlin utility is paying less for power throughout the year, and passing on those savings to customers, including Oberlin College.

Reducing peak demand is “the golden ring for solar,” said Gibson, from the Solar Electric Power Association. “That’s the critical thing that solar can do.”

Solar panels don’t always perform so well during peak hours for demand in late afternoon. Oberlin decided to pay a premium for panels with a tracking feature that allows them to follow the sun across the sky, maximizing energy production throughout the day and evening. That, Dupee said, is why the array has generated more peak-time energy than anticipated.

The solar panels also are reducing what the utility must pay to ensure it has access to sufficient power. That, together with the savings on the cost of transmission, Dupee said, has nudged down what his customers pay by about one tenth of a cent per kilowatt hour, or roughly $10 a year for the typical residential customer.

While the project seems to be paying off financially, money wasn’t the motivator for the college.

“It was a social statement of sustainability,” Watts said. “We wanted solar energy, but not at a big premium.”