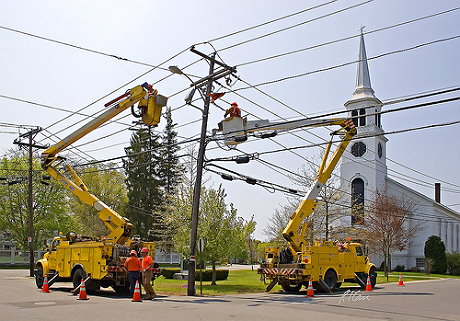 A recent survey identified aging infrastructure as the most common concern keeping electric utility professionals up at night.

Perhaps they should rest a little easier.

Aging utility infrastructure isn’t the ticking time bomb that many perceive it to be, argues Lee Willis, a veteran utility consultant with Quanta Technology and author of a 2013 book on the subject.

That’s not to say replacing old equipment won’t be a growing cost for utilities in the years ahead, says Willis, but the experience will be more like wading through quicksand than falling off a cliff.

“It is the biggest manageable problem they have,” says Willis, a senior vice president with Quanta Technology.

The key word is “manageable.” Willis says utilities that steadily and systematically identify, then refurbish or replace problem equipment — regardless of age — will find a financially sustainable path.

Since the late 1990s, there’s been growing alarm within the electric utility industry about the age of infrastructure. Willis makes the case that much of that fear is misdirected or misinformed.

It’s true that many of the cables, poles, transformers and circuit breakers that make up the U.S. electricity grid are approaching 40 or 50 years in service, but that doesn’t mean a disaster is imminent, he says.

“There is no sudden crisis looming in the future, no decade when failure rates blow up and system and business performance plummets,” Willis wrote in an article published in the March 2012 journal Natural Gas & Electricity. “Aging infrastructures do not create catastrophes.”

That’s because equipment failure rates increase over time very gradually. The statistical odds of a breakdown increase each year, but there is no cliff at the half-century mark, says Willis.

Also: a piece of equipment that is still running or standing at 50 years is probably a survivor. It’s probably been well-made and well-maintained, which improves its odds of lasting another 20 or 30 years.

One example he cites, for example, is a system in the Northeast where the average life of a distribution pole is 56 years, but poles that pass that mark stand on average another 19 years. Some last 75 to 85 years.

The answer isn’t for utilities to start replacing equipment from oldest to newest, he says, but to take a more strategic approach that recognizes age is only one indicator of infrastructure’s reliability.

He advises companies to use software to track equipment performance and identify patterns and potential problems before something fails.

“Ideally, we can identify the equipment that’s going to become bad actors — old or new — just before it does and get it out of there,” says Willis. Or refurbish it to extend the equipment’s life.

Creating that type of system will require utilities to spend a little more money on software and staffing, but it will also save companies the cost of replacing some equipment simply because it’s old.

The recently survey, a poll by Utility Dive of more than 500 utility professionals, showed aging infrastructure was by far the most common response when participants were asked to name the most pressing challenges facing their utility. Forty-eight percent chose old infrastructure, while less than a third selected distributed generation, regulatory models or flat demand growth.

Willis says the aging infrastructure problem will “gradually get a bit worse for many years to come,” but it’s not the kind of thing that should cause lost sleep among utility professionals.

“The thing that ought to keep them up at night is: will there even be a need for my type of company 20 years from now?” says Willis.