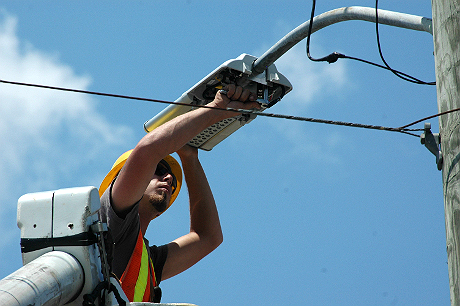 A federal infusion of energy efficiency and conservation funds to cities, counties and tribal governments under the American Recovery and Reinvestment Act of 2009 was a smashing success, according to a recent report released by the U.S. Conference of Mayors.

The report, released February 27, also bemoans the fact that the Energy Efficiency and Conservation Block Grant (EECBG) program funded by the federal stimulus was not renewed, and since then local partnerships with the federal government on efficiency and renewable energy projects have plummeted.

The EECBG was created by the 2007 Energy Independence and Security Act, based on the community development block grants awarded by the Department of Housing and Urban Development. About a year after the EECBG was created, it was funded by Congress under the stimulus program.

After being funded, the EECBG provided $2.7 billion for energy efficiency and conservation initiatives to cities larger than 35,000 people, counties larger than 200,000 and tribal governments, along with giving money to states to distribute to municipalities. Also as part of the stimulus the U.S. Department of Energy awarded another $400 million for energy efficiency and conservation projects.

The Conference of Mayors’ recent report is based on a survey of 204 cities regarding their use of stimulus funding and its ripple effects. It includes more than 30 Midwestern cities, including Minneapolis, Indianapolis, Milwaukee, Green Bay and Grand Rapids.

During a conference call, Carmel, Indiana mayor Jim Brainard lauded the results of the EECBG and the community block grant model, which has enjoyed bipartisan support both for its housing and energy work.

“Priorities set by local elected leaders in their own city have proven to make a real difference,” Brainard said. “It’s a good formula, what we used to call revenue-sharing…Think of the 1,200-some cities in the United States each as a separate laboratory…the best ideas will be copied and repeated…these funds help us do that.”

He noted that Carmel used EECBG money to replace almost all the city’s street lights with efficient LEDs, garnering “a tremendous return on our investment, far in excess of what the private sector would be willing to do…a huge rate of return on the investment made by taxpayers. This is the kind of revenue sharing we should be doing more of.”

How the money was spent

When the EECBG was being debated, critics argued that the money wouldn’t actually spark new projects and would just be used for things cities would have done anyway. But the Conference of Mayors analysis showed that was not the case.

The majority of cities used the money for public infrastructure projects, including LED and other efficient streetlights and traffic lights, public building overhauls and solar and small wind installations on government property.

The survey notes that one unnamed city cut its city hall electricity bills by 47 percent thanks to the program, while another city saved $50,000 annually thanks to the retrofit of 2,000 street lights.

A smaller amount of EECBG money was also used to stimulate private investment in energy efficiency, through loans, rebates, and the like for homeowners and businesses.

Almost two-thirds of the cities said the funds shaped their budgeting priorities and municipal operations; and almost a third said the funding sparked partnerships with private entities, utilities or other municipalities.

“The ‘leverage’ that comes from this relatively modest infusion of federal resources directly into the nation’s larger cities and counties can’t be overstated, considering the enormity of local operating and capital budgets,” says the report.

For example, one city “said it leveraged $300,000 in EECBG grant funds into a $2.5 million solar array project,” the report says. “Two cities indicated that 2 or more MW of solar capacity had been installed in their communities. … Cities also invested in geothermal installations, smart grid technology, and a wind demonstration program.

Some of the money was used to create or augment programs that make it more attractive for private citizens and businesses to increase their energy efficiency or install renewable power. Regulations were revamped to make it easier to get permits for renewable energy systems. And money went toward property assessed clean energy programs, or PACE, and on-bill financing for renewable energy.

The most popular financing program funded by the EECBG involved energy service companies, or ESCOs, wherein private companies facilitate energy efficiency projects, arrange financing and shoulder the risk. During debates over the stimulus energy efficiency funding, opponents had argued that the funds would undercut ESCO projects. But the opposite happened, according to the survey, showing “how the conventional wisdom can miss the mark.”

The EECBG funds were also used to reduce vehicle emissions. Half the cities put funds toward hybrid vehicles and a quarter invested in all-electric municipal vehicles. Some cities also spent the funds on electric vehicle charging stations and bike lanes, encouraging private citizens to reduce their emissions.

Overall the survey indicates that the stimulus funds were a good investment of federal money, yielding wide-ranging investments and benefits while avoiding some of the predicted pitfalls.

But the report says that since the EECBG funds were not renewed, cities have significantly decreased their interaction with the federal government on energy efficiency and conservation.

In a June 2011 survey, as the stimulus funds were still playing out, the recent Mayors’ report notes 71 percent of cities named the federal government as a partner in efficiency projects. In the most recent survey, only 30 percent of cities said they are working with the federal government and instead 71 percent said they partner with utilities on efficiency and conservation projects.

The report says “this unprecedented decline” is “certain to have been the result” of the end of the stimulus EECBG program.

The report describes the block grants as a particularly good way to spend federal money on efficiency, renewable energy and conservation, since the funds are given directly to local government entities to spend as they see fit, provided they meet the program’s goals. The U.S. Conference of Mayors report says their data will be made available for people seeking to improve and continue the EECBG program through legislative or policy avenues.

“Simply, the flexibility of the block grant structure allows cities and other local governments to tailor solutions to their own communities’ needs, which is especially important in the energy and climate arenas,” the report says.

On the conference call, Bridgeport, Connecticut mayor Bill Finch called on Congress to renew the EECBG program, noting that it helped his city invest $20 million in an anaerobic digester for municipal sewage, which has saved a million dollars a year on trucking and transport and $150,000 on energy which is now provided by the digester.

“We were able to make very strategic investments that will be paying off savings for long periods of time, at a time the economy has really wreaked havoc on us,” Finch said. “We need to re-up this money, these EECBG funds, and do it again, do it on a continual basis.”