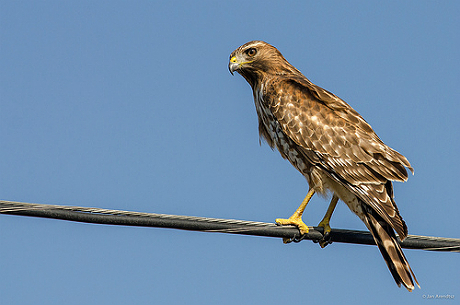 A red-shouldered hawk perches on a power line. (Photo by Jan Arendtsz)

A century ago, the newly emerging electrical grid’s impact on birds and other wildlife was far from anyone’s mind.

Generating and transporting electricity was still a fairly new and urgent challenge, and the concept of protecting wildlife and natural resources was foreign to most people.

A lot has changed since then, says Ameren Illinois Avian Protection Program Director Riley Adams. The Illinois utility is among many working to reduce and mitigate the electrocution deaths of eagles, hawks and other wildlife on utility poles and infrastructure.

When eagles or other large raptors sit on transformers and the cross-arms of utility poles, their wings can touch adjacent wires or conductors, completing a circuit and causing electrocution. Raccoons, possums, squirrels and other animals can also be electrocuted, as can smaller birds who sit on wires or poles.

Eagles and migratory birds are protected by federal law, and utilities can be prosecuted and fined for causing deaths. Enforcement of the law that protects eagles is being stepped up against wind power operators.

U.S. Fish and Wildlife Service (FWS) spokesperson Laury Parramore said she believes a 2009 case was the last prosecution of a utility under bird protection laws.

There, the utility PacifiCorp pleaded guilty in federal court to violating the Migratory Bird Protection Treaty related to the deaths of 232 eagles on its electric infrastructure in two years in Wyoming, deaths the FWS said could have been prevented with readily available measures. The utility was ordered to pay $1.41 million in fines and restitution and to spend $9.1 million making its system safer for birds.

“The Service’s preferred approach is to work with industry on voluntary compliance,” said Parramore. “Prosecutions occur when companies refuse to cooperate and comply with laws protecting eagles.”

The FWS says that the first documented eagle electrocution from a power line happened in 1922. The service has for several decades been pushing companies to prevent electrocutions. In 1989 the FWS formalized the Avian Power Line Interaction Committee (APLIC), a partnership with the National Audubon Society and investor-owned utilities and universities, that drafts and publishes best practices for protecting birds from power infrastructure.

An academic paper endorsed by the FWS said that collisions with power lines and transmission towers kill hundreds of thousands to 175 million birds annually, while tens to hundreds of thousands of birds are electrocuted annually. The paper noted there is not comprehensive monitoring of the issue, so mortality estimates are rough.

The solutions are fairly simple but time-consuming and expensive, given the scale of the infrastructure in question.

Ameren Illinois is in the process of putting special plastic covers on its utility poles. A pole typically has three arms. By covering just the center one with weather resistant, non-conductive plastic, a raptor can perch anywhere on the pole without being electrocuted, Adams explained. It can perch on the cover or on one of the uncovered arms safely; as long as it doesn’t touch two uncovered conductive spots at once.

“They can do anything they want and do it safely,” once a cover is installed, Adams said.

Based on confidential federal surveys of raptor nests, Ameren has prioritized poles within a certain distance of nests. A cover is also installed anywhere a raptor has been killed.

So far about 1,400 covers have been installed. Meanwhile, new utility poles are built with arms farther apart than an eagle’s wing span so there is little risk of electrocution.

The covers also reduce the chance of animals and smaller birds being electrocuted. Additionally, reflectors are being placed on power lines to help prevent swans and other migrating birds from flying into the lines and getting entangled and electrocuted.

“Now everything new we construct is 100 percent avian safe,” said Adams. “There are hundreds of thousands (of poles) out there, so it takes a lot of time to do this. Someday our entire system will be avian safe.”

Adams said that before the protection program was launched in 2010, the utility would log 100 to 150 raptor deaths each year. Now the fatality rate is only about one-tenth that number, he said. It is difficult to compare annual statistics since raptor populations can fluctuate greatly, but he said the reduction is significant.

Raptors also like to build their nests on utility poles. The nests often cause the wood to rot more quickly, so that it collapses and causes outages.

Under federal law the inhabited nest of a protected raptor can’t be disturbed. That means there is little the utility can do when a large nest causes outages or other problems. Raptors are likely to return to the same spot to build a nest in successive years, so Adams explained that the utility sometimes builds dummy utility poles with a convenient “nest box” near the previously inhabited pole, hoping the raptor will rebuild its nest there. Unoccupied nests might also be moved to the dummy pole.

Ameren is also working with two state raptor recovery organizations to treat raptors that are injured on electricity infrastructure or otherwise. It is against the law to touch or move an injured or dead eagle or protected raptor, so all Ameren employees are trained on how to handle raptor deaths and how to contact federal FWS officials.

Adams noted that residents often call Ameren to report injured or dead raptors, even if the situation has nothing to do with electricity infrastructure, so the utility has become a de facto liaison with FWS and private raptor recovery groups.

“It’s just simple things but it works really well,” said Nuzzo. “I know they’re serious about it…They don’t want birds to die, and there’s also the amount of money for outages caused by birds. It’s a two-sided story; they want to protect the species, and it also saves them money in the long run because they don’t have to send people out for outages.”

Ameren donated $35,000 to the Treehouse Wildlife Center in Alton to help them build an indoor flight cage where recovering raptors can practice flying. The utility also donated $50,000 to the Illinois Raptor Center in Decatur, allowing it to build new housing to separate convalescing raptors destined to be released back into the wild from “staff birds” that aren’t fit to be released and are used for educational programs. The donation also enabled housing specifically for different types of raptors, like a unit just for small hawks called American kestrels.

When Ameren staff visited the raptor center earlier in the initiative, Nuzzo said, they realized that there were numerous unprotected poles right in the surrounding area.

“The first thing they did was raptor-proof everything on the property – that was one of the coolest things,” said Nuzzo. “We have guard owls on our property, red-tailed hawks, this will protect them.”

He said Ameren is working with the raptor center to set up educational programs in schools. “It will be a neat partnership for years to come,” he said.

A number of companies offer products to prevent deaths of wildlife on utility infrastructure. For example, Critter Guard promises to prevent squirrels “from using your power lines as a ‘highway for chaos’” and also offers equipment to stop raptor deaths.

Many utilities nationwide have specific avian protection programs. But Ameren has a greater responsibility than most, since Illinois is on a major migratory flyway.

After Ameren staff started looking at data and working with an avian protection consultant, Adams noted, “We realized there are hundreds and hundreds of nests along the Illinois and Mississippi rivers that you don’t even know about.” There are apparently many more nests on the Illinois side of the Mississippi River than the opposite side, he said. More migrating raptors show up in Illinois when it is especially cold in Alaska and Canada, Adams noted, while many eagles and other raptors are permanent residents in Illinois.

The costs for raptor-related overhauls are figured into the utility’s standard operating costs, passed on to ratepayers. Each pole retrofit costs $500 to $2,500, Adams said. The utility will spend about $3.5 billion in coming years replacing old poles and conductors with bird-electrocution-proof construction.

“Anything we can do to increase reliability is a benefit for our customers,” Adams said. “And the raptors love it because it protects them.”