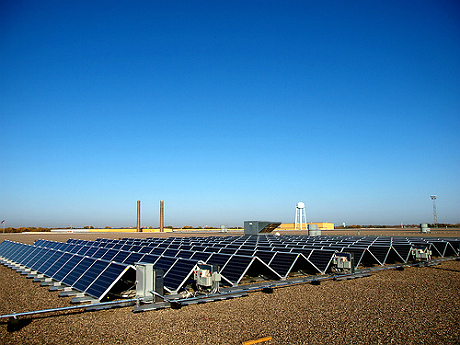 The Minnesota Public Utilities Commission voted 3-2 in favor of a proposal aimed at settling the perennial debate over how much solar power is worth to a utility and its ratepayers, as well as society and the environment.

“I think that consensus is really beginning to emerge,” said Lynn Hinkle, policy director for the Minnesota Solar Energy Industries Association. “There’s no doubt what happened today was a step forward.”

Investor-owned utilities will now have the voluntary option of applying to use the value-of-solar formula instead of the retail electricity rate when crediting customers for unused electricity they generate from solar panels.

Utilities have complained that paying the retail rate, under a policy known as net metering, amounts to an unfair subsidy for customers that own solar panels at the expense of those who don’t. Meanwhile, solar advocates say the retail rate underestimates the value of solar panels to the grid and society.

Minnesota Gov. Mark Dayton signed a bill last year requiring the state’s energy office to develop a formula that utilities may use to determine how it should compensate customers who generate electricity from solar panels.

‘This isn’t an incentive’

Wednesday’s debate, which follows nearly two years of discussions among state officials, utility representatives and solar advocates, focused largely on the cost of carbon emissions, of which there were three main options.

One was referred to as the “established externality value” and was created by Minnesota utility regulators two decades ago as a tool to help the commission evaluate resource options.

The value has been updated for inflation but never fully reevaluated, and the commission recently agreed with environmental groups that the numbers are “outdated and no longer scientifically defensible.”

Another was referred to as the “planning value” and was created in recent years to help Minnesota utilities and regulators estimate the likely cost of complying with future carbon regulations. That number doesn’t reflect the cost to society in health or environmental damages from carbon, something the Minnesota law requires to be included in the formula.

Instead, the commission voted to adopt the federal government’s social cost of carbon figure, which environmental groups and the state’s Department of Commerce argued was the best fit for a value-of-solar formula.

“The social cost of carbon is specifically focused on measuring what is the economic and health damage of emitting one more ton of carbon,” said Erin Stojan Ruccolo, director of electricity markets for Fresh Energy.

Fresh Energy is a member of RE-AMP, which publishes Midwest Energy News, which is based at the St. Paul nonprofit.

Commissioner David Boyd, one of the two dissenters, said he objected because the social cost of carbon hasn’t been thoroughly vetted by the utilities commission. He preferred one of the state-studied numbers.

“For me, this is a deal-breaker. I won’t vote for this methodology with that in there.” Boyd said. “It’s not the number. It’s the process.”

Commission Chair Beverly Jones Heydinger, however, countered that it isn’t fair to describe the social cost of carbon as unvetted, noting the extensive and open federal process that was involved in developing it.

“It’s hardly a number that was picked out of thin air,” Jones Heydinger said.

Another “no” vote came from Commissioner Betsy Wergin, who said that other than “a pretty miniscule number” of residents who own or plan to own solar panels, “the rest of ratepayers were really not at the table.” She also said she was unconvinced that the formula wouldn’t amount to a subsidy for solar.

Commissioner Nancy Lange restated the state energy office’s position: “This isn’t an incentive. This isn’t designed to be a prop-up for the solar industry.”

How the formula works

Bill Grant, Minnesota’s deputy commissioner for energy, said the objective was to find a formula that accurately reflected all of the costs and benefits to all parties involved, including utilities, solar owners and other ratepayers.

“The goal as I see it with the value of solar is to find that point … at which everyone should be indifferent about whether this rate is imposed or not,” Grant said.

The methodology for calculating a value-of-solar tariff will be the same for any utility that wishes to propose one, but the end rate will vary depending on circumstances specific to each utility’s load and generation mix.

Grant said it isn’t a “foregone conclusion” that the value-of-solar rate will be higher than the retail or avoided cost rates. It might, but it might not, he stressed.

The state law tasked the Commerce Department with proposing a tariff design to the utilities commission earlier this year, after which the board had 60 days to approve it or not.

“We believe that the methodology we’ve put in front of you really is plug-and-play.” Grant said, adding that there shouldn’t be need for utilities or the department to develop additional formulas or spreadsheets when a utility applies to create a value-of-solar tariff.

Utilities’ testimony over the last two months has been skeptical and questioned the department’s methodology in some areas, including the cost of carbon.

Minnesota’s community solar gardens law says that participants in those shared solar projects should be reimbursed at the value-of-solar rate. Beyond that, the tariff’s adoption is voluntary.