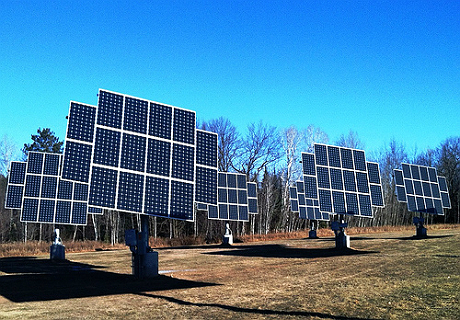 Solar panels at the Audubon Center of the Northwoods in Sandstone, Minnesota. (Photo by CERTs via Creative Commons)

The value of rooftop solar energy systems goes on trial in Minnesota today in a case drawing attention across the country as regulators, utilities and clean energy advocates grapple with how to integrate customer-generated energy into the century-old utility business model.

The Minnesota Public Utilities Commission will hear arguments from at least a dozen parties on how to devise a formula to compute solar power’s value, including its contribution to stemming greenhouse gas emissions and the effects of climate change (EnergyWire, Jan. 2).

Minnesota’s Legislature passed a law last spring that required the state Department of Commerce to propose methodology for computing a solar tariff that investor-owned utilities could offer their customers to compensate them for self-generated power.

Now, Minnesota is on track to become the first state to establish a so-called value-of-solar tariff — a rate that utilities could offer customers as an alternative to net metering policies now used in 43 states and the District of Columbia.

With net metering, customers with rooftop solar systems earn bill credits for surplus power put back on the grid, often at existing retail rates. Utilities argue that the rates are unfair and don’t compensate them for fixed costs — the power plants, poles and wires — that are still required to produce and deliver energy when the sun isn’t shining.

The value-of-solar rate formula being developed in Minnesota attempts to align the interests of utilities and consumers by more precisely identifying the attributes of solar energy and their benefits to the bulk power system. It is a concept being talked about in other states, including Michigan and Georgia.

“I think there’s demand out there for a rational path for figuring out how to deal with distributed generation resources, and solar is top among them,” said Karl Rábago, an energy consultant who helped pioneer the value-of-solar tariff concept while an executive at Austin Energy.

The Minnesota Department of Commerce’s methodology, prepared by consultancy Clean Power Research, includes costs that are more easily quantifiable, such as fuel not burned in power plants or transmission and distribution capacity that is not needed when customers generate their own electricity with rooftop arrays.

Then there are costs that are more difficult to pinpoint, such as the value a decade from now of greenhouse gas emissions avoided.

The Minnesota PUC is expected to rule today on the proposed formula for determining the value of solar. Once that’s established, specific rates would be established for utilities.

Austin Energy, the public utility that serves 420,000 customers in and around the Texas capital, developed the value-of-solar methodology under Rábago’s leadership in 2006 and adopted a solar tariff in 2012.

Last year, the utility’s customers were credited a rate of 12.8 cents per kilowatt-hour for solar energy they generated, or about 3 cents higher than the retail rate customers paid for power. The solar rate fell to 10.7 cents last month because of declining natural gas costs but remains higher than Austin Energy’s retail rate.

Clean energy advocates in Minnesota believe the value-of-solar rate must be greater than a utility’s retail electricity rate because of the avoided fuel, transmission and distribution costs inherent to customer-generated solar energy as well as the fact that it’s most often available during hours of peak demand.

But it’s not so clear that utilities share that view.

“When we pay solar customers for something solar does not actually avoid or pay more than the cost that is avoided, we are paying in excess of the real value of solar and are not solving one of the key issues associated with net metering — cost-shifting,” Xcel Energy said in its initial comments to the PUC.

Xcel, Minnesota’s largest utility, calculated a “preliminary” value-of-solar rate for a customer using 650 kWh a month of 7.4 cents per kWh if the commission adopted its recommendations. That’s less than the current net metered rate of about 11.5 cents and far below than the 14.5-cent rate calculated by Xcel using the methodology proposed to the PUC.

The utility disagreed in particular with the department’s methodology for calculating avoided costs for generating and transmission capacity, fuel costs and environmental costs.

A sticking point between Xcel and other Minnesota utilities and solar energy advocates involves the environmental benefits that get baked into the solar tariff, particularly the benefits of avoided carbon dioxide emissions.

The solar tariff methodology proposed by the Department of Commerce would assign a dollar value to CO2 emissions based on the a social-cost-of-carbon calculation developed by a federal interagency working group. The cost of carbon figure, which has already been used by U.S. EPA and the Department of Energy in federal rulemakings, estimates the incremental cost of a ton of carbon dioxide in property damage, health care costs and lost agricultural output (ClimateWire, Feb. 26).

Otter Tail Power, a utility that serves 130,000 customers in Minnesota and the Dakotas, argues that the cost of avoided carbon dioxide emissions doesn’t belong in the state’s solar tariff calculation.

Allen Gleckner, an attorney with the Environmental Law and Policy Center, said the Minnesota statute that led to development of a solar tariff clearly states otherwise.

With some minor exceptions, Gleckner believes the department’s proposed methodology is sound.

“Overall, we think it’s a pretty accurate representation of the value that solar provides to the system,” he said.

Ultimately, Minnesota’s solar tariff would be a voluntary option, so the formula approved by the PUC would have to be seen as a favorable alternative by the utilities, or it could go unused.

Rábago, a former Texas utility commissioner and Department of Energy official, believes utilities would be shortsighted to base their decision whether to offer the solar tariff purely on whether it is greater or less than the existing net metering rate.

“I don’t think a utility that wants to be around for a long time can use that argument all of the time,” he said. “This commodity-based business model is what’s driving them into the death spiral.”