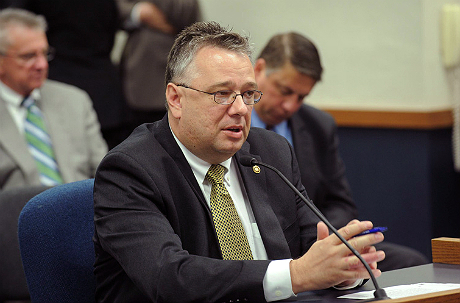 A Republican from an exurban district in the red state of Missouri, Rep. T.J. Berry is also a self-described “green champion.”

Berry, who represents an area just outside Kansas City where cul-de-sacs give way to farm fields, is known as the leading advocate for renewable energy in the Missouri House of Representatives. This session, he’s introduced three bills which would advance solar energy.

However, Rep. Berry hasn’t always been such a friend to solar in particular, nor to renewables in general.

Midwest Energy New: How would you characterize your view of renewable energy when you first joined the Missouri General Assembly in 2011?

Berry: It wasn’t on my radar screen. I am most definitely a Republican, a nuts-and-bolts kind of guy. I wasn’t excited about the cost of it. I didn’t see the need to subsidize it.

But what triggered my evolution was that site permit. It was $40 million. I did some research on what was going on in Florida and Georgia — cost overruns. Why would we want to go down that road? When Wall Street won’t fund a building project, guess who does? The government. It does that by letting the public service commission increase the rates.

I thought, “If we authorize a $40 million site permit, they’ll come back and ask for money for construction.”

I began reading books on power generation. One of them broke down all of the different (technologies) that generate power. I believe in diversification. With all of the things that can go wrong with the grid, it would be good to have a chunk of solar, and a diversified grid.

I’ve supported solar and biomass legislation. The biomass bill was tax credits to help the industry. I’ve tried to do several things with net metering and the true-up. If I’m going to invest in solar, and the utilities don’t have to invest (in additional generation) I should get a benefit.

You raise some big issues there. Why would a Republican like yourself support tax credits for renewables, especially given your opposition to taxpayer support for a nuclear plant?

There’s a huge difference. People installing renewables are using private money and getting a tax credit. They’re not asking for a blank check, and for the government to write that check.

The price per watt of solar in Missouri has fallen from about $8 in 2008 to $3.50 now. If we can get it to $2.75, there will be no need for tax incentives. The idea is that if we get more solar going, we’ll get more efficiency. That is just what we’ve seen.

The question of what solar power is worth is a matter of intense debate currently. What do you think it’s worth?

If I put up solar, and I produce excess power in September, and in October I don’t, I’m going to give power to the utility at a wholesale rate, maybe 3 cents per kilowatt hour, and the next month, I have to buy it back at retail.

If we want a truly competitive system, it has to be tied to what utilities pay for wholesale power on an hourly basis. Peak-use power is charged at a very high rate, like 19 cents per kilowatt hour. If the utilities have to go on the grid and pay 19 cents an hour, they should pay me 19 cents at the peak.

Missouri derives 81 percent of its power from coal. You’ve called that a risky proposition. Risky in what sense?

The costs. If it suddenly becomes much more expensive, you have no other options. So you have to diversify, so the cost doesn’t hit a mountain and go straight up.

Do you expect the cost of coal to go up?

I do. I’m doing this for economic reasons, but they go hand in hand (with environmental considerations). So I’ve become a green champion.

Is your support of renewables mostly rooted in economic considerations?

It is, in the cost of energy and the diversification of risk. If you have a diversified grid, and lose power to some event, if you have a lot of wind and solar, that can pick it up.

Does this mean you see wind and solar mostly as backups, as insurance in the event that a coal or natural gas-fired plant fails?

We need to grow wind and solar, and definitely biomass. I see it as a security blanket, both in terms of national security and of keeping costs lower if the EPA requires carbon sequestration or carbon credits.

Why don’t more Republicans share your enthusiasm for renewable energy?

It’s all about industry. Most industries are resistant to change, and Republicans are much more industry-sensitive than Democrats.

How does renewable energy fit in with your political worldview?

The idea of stewardship is where it fits in with me. Trying to use resources wisely is where it fits in. I like solar because it allow us to have diversified generation. If you want to invest, you can control your own energy. Self-sufficiency always resonates with conservative people.

How hopeful are you that your legislation will pass?

It’s been heard in committee, and I hope to get it to the Senate. But it’s an election year, and energy issues are not on the front burner.

Even so, some renewable-energy advocates say there is generally more support in the legislature for renewables this year than in the past. Do you agree?

I think it’s growing. The NAACP was here three weeks ago. They had a full [session] on energy and the true-up. When you have organizations with different points of view, that builds [renewables] up. They came at it from the equality point of view.

There are plenty of business people saying, “This is a new industry. We should invest.”

It builds a groundswell. What’s important is that each of these groups has a different reason, but they all want to do the same thing.

I hear you’ve invested in a biomass project.

I have invested in it, but we have not made an announcement to the public. I authored the tax credit bill before I had an inkling (about investing in the technology.) I didn’t re-introduce the bill this year, because I didn’t want any possible conflict of interest.

Why did you decide to invest in biomass?

Are your fellow legislators and others surprised at the change in your thinking regarding renewable energy?

They are. It’s not a traditional Republican point of view. I’ve had to do a lot of education of my colleagues, one at a time.

Do you think you’re changing any minds?