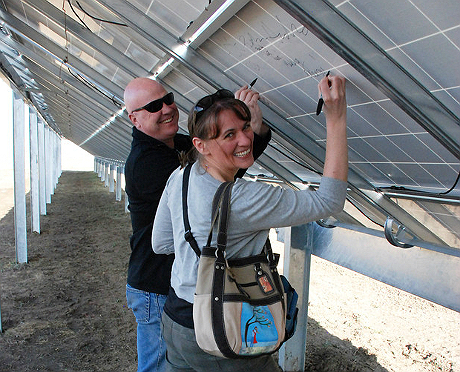 Solar power in Kansas will take a major step forward after an agreement to install what is both the first community solar project and the largest solar array in the state.

Midwest Energy, a rural electric co-op headquartered in Hays, Kansas, and Boulder, Colorado-based Clean Energy Collective are collaborating on the 1 MW installation, to be located somewhere in the 41 counties in central and western Kansas that are served by the utility.

Midwest Energy decided to take the plunge into community solar at the behest of its members. Surveys of customer-owners revealed “a lot of interest in community-type solar,” said Mike Morley, the co-op’s spokesman. He put the support for solar at about 40 percent of the membership.

In a community-owned solar project, participants invest in a share of a large-scale solar array that provides energy to the utility. That makes it accessible to customers other than homeowners with enough space and full exposure to the sun.

It’s also much simpler than jumping the hoops to install panels on your own roof, said Tim Braun, a spokesman for Clean Energy Collective.

“It’s one phone call to turn the system on,” he said.

Midwest Energy hopes to decide within a month where it will put up the 4,000 solar panels, Morley said.

The National Renewable Energy Laboratory says Kansas has the fifth-highest solar potential among U.S. states, but as of 2012 the state only had 0.5 MW installed, ranking it 46th overall.

Braun said overall he is “seeing more and more demand, in particular for community solar.” Clean Energy has developed or is working on 33 community solar arrays, he said.

Community solar arrangements can help utilities avoid the sticky issue of deciding what to pay a homeowner for excess power. Rather than a two-way connection, the array only provides power to the utility. The price for the power the array generates is decided jointly by the developer – in this case, CEC – and the utility – in this case, Midwest Energy.

Morley said discussions are ongoing, but that the rate will be “reflective of the value of energy at peak time.”

Once the price per kilowatt hour has been set, utility customers can decide, based on that rate, whether they wish to participate.

“This gives customers what they’re after – generating their own power – and works for everybody,” Braun said. “It’s a good balance of control for the utility and accessibility for the consumer.”

The plan in Kansas calls for customers to purchase their panels from the installer, Clean Energy Collective. The utility has an agreement to purchase all of the power from Clean Energy. The payment to customers will show up as a credit on their bill. The credit cannot exceed the bill, but can be carried over into the following month, Morley said.

In Kansas, Midwest Energy has some history as an early advocate of renewable energy, according to Morley.

“Midwest Energy was one of the first adopters in Kansas for wind,” he said. It now has a contract for 50 megawatts from a Kansas wind farm.

“Our members have known for some time that some of their electricity comes from renewables,” he said. “Solar was another opportunity to get involved in renewables. And that appealed to them.”

His customers are “very pragmatic,” Morley observed. “The price of solar has come down so that it is competitive. They are willing to look at alternatives, if they are priced right.”

Residential customers will be allowed to purchase as many as 26 panels, for a total generating capacity of around 8 kW. Commercial customers will have the option of buying up to 75 kW of capacity. Each panel can produce 300 watts.

The array, which would be the second-largest community-solar array in the country, will contribute only marginally to the coop’s power supply. Its 1 MW capacity represents only a fraction of the utility’s peak demand of 395 MW.

Although the coop has met the state’s renewable energy standard, which requires utilities to derive a certain proportion of their power from renewable sources, the customer-owners were energized for more.

“This is driven more by input from our members,” Morley said.

Editor’s note: An earlier version of this story incorrectly stated that energy credits couldn’t be carried over into future billing cycles.