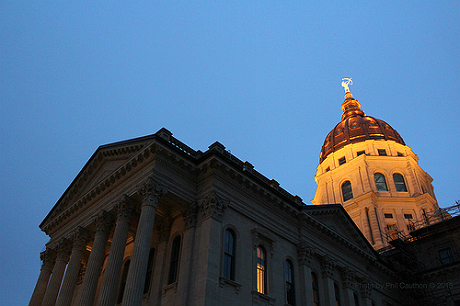 The Kansas Statehouse in Topeka. (Photo by Kansas Health Institute via Creative Commons)

Clean-energy advocates and Kansas’ largest utility have agreed to maintain net metering in the state – but in a somewhat diminished form.

Earlier this year, lawmakers introduced bills that would have hobbled net metering, if not kill it outright, according to supporters of the policy. The bills would have drastically reduced – or eliminated – what utilities pay to small generators for their excess power.

Last weekend, however, advocates met with a negotiator for Westar Energy and developed a compromise that is predicted to pass the legislature.

The middle ground, which was introduced on the Senate floor on Wednesday, would reduce the maximum size of solar arrays eligible for net metering. In addition, it would change the “true-up” period from the current standard of once a year to once a month. Any excess power at the end of the month would be credited to the customer at the utilities avoided cost rate.

The changes would apply only to installations installed after July 1 of this year.

Aron Cromwell, CEO of a solar design and installation firm in Lawrence, Kansas, spent long hours over the past weekend negotiating with the Westar representative.

“This is the best we could have gotten,” he said. “We avoided a lot of harm. The first iteration of this killed net metering.”

One bill moving through the legislature earlier this year would have eliminated any payment to owners of small solar or wind installations. Current law requires that utilities pay net metering customers the retail rate that the utility charges for power, approximately 10 cents per kWh. Another bill that surfaced this session would have cut that to 150 percent of what’s known as the utility’s “avoided cost,” amounting to about 3.5 cents per kWh.

The compromise puts tighter limits on the permitted size of solar installations to be connected to the grid. Kansas law currently allows installations of up to 25 kW at a residence and 200 kW at a commercial site. The agreement reduces those to 15 and 100 kW, respectively. It also provides a 150-kW threshold for schools.

It also reduces payment to generators to 100 percent of “avoided cost,” a substantial cut from the retail rate.

The compromise “really isn’t too much of a loss,” said Pierre Bull, a policy analyst for the Natural Resources Defense Council. “It’s disconcerting to see how utilities have responded to applicants getting on the system.”

He said that net metering has been challenged in several other states recently, mostly through regulatory channels. Last summer, the Arizona utility regulator decided to allow utilities to impose a fee on small-scale solar generators.

In Colorado, he said, it appears that the public service commission is going to honor a request by Xcel Energy to do a cost-benefit analysis of net metering.

Regulators in North Carolina this spring will begin a similar study.

The campaign against net metering has by far been most energized and vociferous in Kansas, according to Bull.

“It really spoke to the political power that utilities have in Kansas,” he said.

Cromwell said he thinks the compromise will cause only limited damage to renewables and net metering. He doesn’t foresee a 15-kW limit actually interfering much with solar installations at homes.

“I don’t think this will affect our customers. Our average is about 7.5 kW. We’ve done larger residential [installations], but maybe one or two. With 7.5, we’re meeting most of their needs.”

The true-up policy is important because it determines how much time is available to a customer to equal out the energy produced with the energy consumed. With a once-a-year true-up, a customer is more likely to use up credit for excess power generated during peak production time.

“Something was going to happen,” he said. “Our ultimate win would have been to avoid any change at all. But that was not going to happen. We had to do something to mitigate the damage.”

“The Senate bill could have moved on,” said Zack Pistora, who lobbies for the Kansas Sierra Club. “We were asking ourselves, ‘Do we want to go head-to-head on a bill that is significantly worse than the House bill?’ It was a tough call.”

As Cromwell sees it, “We got a win, and they (the utilities) got a win.”

There may be one more gain for the utilities in this dispute. The bill allows them to seek from the Kansas Corporation Commission some sort of monthly fee to be imposed on solar generators.

“We have the ability to challenge that,” Cromwell said, “and we will do so.”

One more benefit for net meterers: if the substitute bill passes the legislature – and Cromwell believes it will – it is likely to discourage further bills designed to weaken or kill net metering.

“It would be a difficult case for them to make after agreeing to this,” Cromwell said. “This should give us stability for the next couple years.”

An earlier version of this story erroneously stated that customers would lose credit for excess energy at the end of the monthly true-up period under the proposed plan.