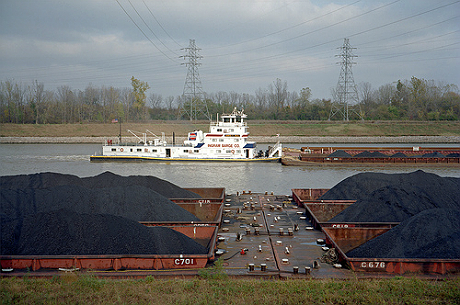 Coal barges on the Ohio River. (Photo by Bill Alden via Creative Commons)

A case before the Ohio Supreme Court could leave the state’s ratepayers with no way to recover unreasonable utility overcharges.

American Electric Power-Ohio is challenging an order requiring it to credit customers for $35 million in excess coal costs. In another case just last month, the Ohio Supreme Court ruled that AEP could keep $368 million in past overcharges.

AEP argues that both cases involved “retroactive ratemaking” — going back and changing utility rates after the fact.

The Office of the Ohio Consumers’ Counsel (OCC) says both cases show how the current regulatory scheme favors utilities.

“Regulation is out of balance in the utilities’ favor and to the customers’ disfavor,” stresses OCC spokesperson Marty Berkowitz.

OCC was a party in the case decided last month, which let AEP keep $368 million in overcharges. It also took part in the regulatory proceedings that led to the current case.

In the current case, AEP argues that it shouldn’t have to credit customers for excess charges under a fuel adjustment clause in its 2009 rate plan. AEP-Ohio was able to impose those charges before the Public Utilities Commission of Ohio (PUCO) could conduct a detailed review to determine whether they were reasonable and prudent.

Such “single-issue ratemaking” differs from traditional ratemaking, in which “utilities were given an opportunity, not a guarantee, to recover costs from customers,” says Berkowitz.

Consumers generally have not been able to get a stay on rate payments pending detailed PUCO review and any later appeals, Berkowitz says. That’s because the Ohio Supreme Court has previously interpreted Ohio law to require posting of a cash bond. In contrast, he notes, utilities such as Dominion East Ohio and FirstEnergy can and recently have posted cash bonds in appeals from PUCO orders.

Thus, under a fuel adjustment clause and similar rate provisions, utilities get to collect the charges until they’re eventually reviewed and any appeals are decided.

But then, AEP argues, there is no “overcharge.”

“AEP Ohio does not agree with the premise that ‘overcharges’ occur when the utility is merely charging — as it must — the rate approved by the Commission,” says AEP spokesperson Terri Flora.

Essentially, AEP is saying that because the utilities were authorized to collect the money in the first place, they shouldn’t have to give any back after later review.

In effect, then, the rules would let utilities start collecting charges before the Commission could hold a detailed review. But then any later review might be meaningless without refunds or credits.

“If utilities continue to be successful in avoiding refunds to customers in circumstances where they have charged customers for costs that are later found to be unreasonable or unlawful, then single-issue ratemaking becomes even more of a problem for customers,” stresses Berkowitz.

When the PUCO did conduct its review under the fuel adjustment clause, it determined AEP’s utility companies had charged too much. It ordered them to credit the overpayments against current fuel charges. AEP’s Ohio utilities appealed.

Under a 2008 agreement, AEP agreed to buy a quantity of coal for 2009 at a particular price. The agreement also gave AEP a cash payment and land with undeveloped coal reserves.

“A deal is a deal,” AEP attorney Steven Nourse told the court.

The company had already accounted for the contract’s benefits in 2008. Adjusting the 2009 price based on those benefits would be retroactive ratemaking, Nourse argued.

Arguing on behalf of the PUCO, attorney Thomas McNamee maintained there was no retroactive ratemaking.

“A deal is a deal,” agreed McNamee. However, he said, AEP could not pass through just the 2008 agreement’s high coal prices.

AEP should have offset those costs by the benefits it got as well, McNamee said. Those benefits were the cash payment and the value of the land.

The amount of those benefits allocated to AEP’s Ohio utility customers is about $35 million.

The rate plans for both 2008 and 2009 reflect Ohio’s shift toward competition in the retail market.

During the transition, rate stabilization plans protected utilities from some of the effects of competition. Consumers were supposed to benefit from not having big fluctuations in rates.

“During that time period, customers enjoyed stabilized rates, and the Company was not able to recover extraordinary costs incurred during 2008 in particular,” notes Flora. Coal prices were unusually high in 2008.

In effect, Nourse argued that because the company accepted the risk of higher fuel prices for 2008, it should keep all the benefits it negotiated then.

McNamee maintained that the case deals only with coal purchases for 2009.

“This contract was only for coal that was supposed to be delivered in 2009,” attorney Joseph Oliker agreed. He argued on behalf of Industrial Energy Users-Ohio (IEU).

IEU wants all $71 million of the agreement’s benefits credited to Ohio Power retail customers, with no allocation for AEP’s wholesale customers

AEP’s arguments about retroactive ratemaking come right after its recent victory in another rate review case.

In February 2014, the Ohio Supreme Court held that AEP customers could not recover $368 million of overcharges. Those charges were supposed to cover AEP’s costs for standing ready to sell electricity to customers who might return after trying a competitive supplier.

In earlier proceedings, the Ohio Supreme Court held that no evidence supported those charges. However, its February 2014 decision held that the Commission could not order AEP to refund amounts paid while appeals were pending.

Nonetheless, the court felt its result was required by a 1957 case that prohibited retroactive ratemaking. A stay of the contested charges could have prevented the unfair result, Lanzinger added.

The Supreme Court has previously interpreted Ohio law to require a cash bond as a condition of a stay, notes Berkowitz.

“OCC (a government agency) cannot afford to pay for such a bond,” he says.

“The $368 million that AEP gets to keep should have been put to use to reducing Ohioans’ electric bills,” Berkowitz adds.

“‘Set-off’ would be a better term for what’s going on here,” Pfeiffer suggested.

“If you’re making up for past inequities or ‘unlawful waste’ with future adjustments, then you’re still engaging in retroactive ratemaking,” argued Nourse.

OCC was also a party to the PUCO proceedings that led to the ruling challenged in the fuel adjustment case. It did not appeal the Commission’s ruling.

One question posed to Nourse last week asked how much the fuel adjustment case would impact individual customers.

“It would be less than $10, and it would probably be spread over a period of a year,” Nourse answered.

That amount still matters, insists Michael Smalz of the Ohio Poverty Law Center. He appeared on behalf of the Appalachian Peace & Justice Network in the PUCO proceedings for the case.

Low-income ratepayers are hit particularly hard by high utility rates, says Smalz. “They already find it very difficult to pay for their food and utilities and rent and everything else—their basic necessities.”

“It doesn’t seem really fair to me to say when you’re trying to recover an overpayment that it’s a retroactive rate increase,” Smalz adds.

FirstEnergy also raises an argument about retroactive rulemaking in another pending case. That case involves the PUCO’s 2013 ruling that FirstEnergy’s Ohio utilities overcharged customers for renewable energy credits. About $43 million is at stake.

As with AEP’s fuel adjustment clause case, FirstEnergy’s renewable energy credit case is one where the utilities could charge customers before the PUCO determines whether the expenses are reasonable and prudent.

The FirstEnergy case is in the briefing stages now.

Meanwhile, a new appeals case asks the Ohio Supreme Court to rule that a bond is not required to stay collection of charges.

The new case challenges a PUCO ruling that would let Duke Energy Ohio bill customers for $55.5 million in environmental study and clean-up costs at two sites.

Duke Energy has not used those two sites for utility service in more than 50 years. Nonetheless, the PUCO agreed to let Duke Energy pass the costs through to customers.

OCC, the Ohio Manufacturers Association, Kroger Company, and Ohio Partners for Affordable Energy appealed. And on Monday, they asked the Ohio Supreme Court to hold that a bond is not required to keep Duke Energy from collecting the charges during the appeal.

Among other things, the motion argues that the law requiring a bond improperly restricts the court’s “inherent authority to issue stays.” OCC and the other moving parties say that violates separation of powers under the Ohio Constitution.

“OCC also explains that it cannot afford the cost of a bond,” says Berkowitz.

In any event, notes Berkowitz, the bond requirement for a stay and the retroactive ratemaking argument put customers “at risk” for paying millions more than they should for utility charges.

“OCC will work with legislators to seek to correct this system that favors utilities against the interests of Ohio customers,” Berkowitz says.