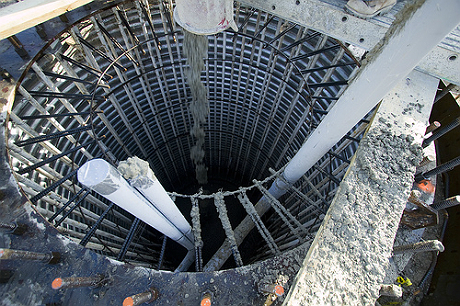 Workers pour concrete into a wind turbine base at Ohio Northern University in 2010. (Photo by Ken Colwell via Creative Commons)

Last week, EnergyTrends.org released grades for states based on overall performance in renewable energy. Ohio got a C+.

The website’s scoring system gives points for installed capacity, growth in renewable energy, electric savings, and state incentive programs. It also considers evaluations from groups such as the American Council for an Energy-Efficient Economy (ACEEE), Ernst & Young, and SolarPowerRocks.com.

“The highest of the letter grades that were given was a B+,” notes Don Soifer, executive vice-president for the Lexington Institute, which runs the EnergyTrends.org website. Ohio’s grade was close to the middle.

“What goes into the letter grade is a reflection both of policies and things the renewable energy community would feel are being friendly” to its growth, says Soifer. Data also play a big role.

Ohio got 47 out of 85 possible points. It ranked 40th among the states for renewable energy capacity per person.

Among Midwestern states, Ohio’s grade was lower than Illinois’ B and Michigan’s B-. Yet it was ahead of Minnesota’s C-, Wisconsin’s D, and Indiana’s F.

EnergyTrends.org also ranks states for overall energy consumption per person, and for per-capita use of different types of energy.

Ohio ranks 14th for most coal energy used per person. That places it in the top third among states.

The website ranks Ohio in 21st place for overall energy use per person.

Soifer says the website’s data come from the Department of Energy. However, he says, “The most recent data that’s available to researchers is 2011.”

“If we had up-to-date information, I think our grade would be higher,” says Ted Ford, President of Advanced Energy Economy-Ohio. The organization is a trade group for renewable and advanced energy companies.

“I would give us a grade of at least a B+ for what’s been achieved so far in this state,” Ford says.

“The cost of solar has come way down. Wind is considered comparable [to other types of generation] in terms of cost,” adds Ford.

Among other things, Demeter says, “We continue to see tremendous investment in large utility scale wind farms in Ohio.”

The EnergyTrends.org website says, Ohio “currently has only 11 MW of wind energy capacity, but has much greater potential given the shores of Lake Erie.”

The Buckeye Wind Farm in Champaign County will add another 126 megawatts.

And just last week, the Ohio Power Siting Board approved the Scioto Ridge Wind Farm for Hardin and Logan Counties. Its 176 turbines will generate up to 300 megawatts of electricity.

“It just goes to show you how tremendously quick this industry is growing in Ohio,” says Demeter.

“Even though our renewable energy grade is only a C+, if EnergyTrends does another report in a couple of years, hopefully that will jump up,” she adds.

However, there’s no guarantee.

“Certainly a weakening or a rollback of our state renewable portfolio standards” would push the score down, notes Demeter.

That’s particularly true if the legislature changes the current law’s requirement that calls for half of the state’s renewable energy goals to come from in-state sources, she says. “That’s definitely a policy that’s driving that investment in the state.”

According to its website, the Lexington Institute generally favors market-based solutions.

“‘Free market’ is how the Wall Street Journal describes us,” Soifer says.

That point of view leads to a focus on “real changes in energy that are not driven entirely by government subsidies,” says Soifer.

However, Soifer says, the purpose in providing the energy data is to help people make informed decisions.

“We really do our best to be neutral,” says Soifer. “We certainly see a lot of promise in some kinds of renewable energy.”

As solar and wind energy in particular “continue to evolve and continue to find ways to drive the costs down,” Soifer adds, those dynamics “are really going to produce sustainable changes.”

Those changes are happening, says Ford. But meanwhile, “The status quo is heavily subsidized.”

“Policy is critical in order to level the playing field and make it possible for renewables to come online in a significant way,” Ford says.

Toward that end, Demeter says, federal tax incentives and Ohio’s renewable portfolio standard have been very helpful. “It’s been important policy to help level the playing field with nuclear and with coal and with natural gas.”

“With every month that goes by, [renewable energy] is becoming more cost-competitive with those traditional resources,” Demeter adds.  “A lot of it has to do with fuel costs.”

Solar energy, wind power, and geothermal energy are “capital intensive in the beginning, but then they deliver that electricity” for just the cost of maintenance, she says.

Energy is a field in which it “takes a while to develop new technologies,” notes Soifer. “It takes sustained investment. And it takes a policy framework that lets those take hold, which can be very tricky. We’re really navigating that now.”

Soifer adds that when the electric industry first developed, it sort of “popped up” as demand for electric lighting grew.

“Now we’re seeing actually there may be advantages to having a more systematic policy framework that develops policies and ultimately solutions that suit our long-term needs,” Soifer says.

“From the point of view of renewable energy, the United States has a lot of room for growth,” he adds.

The OEC is a member of RE-AMP, which publishes Midwest Energy News.