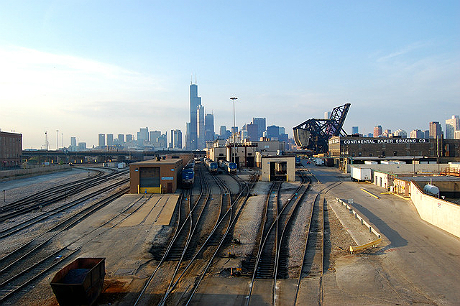 Frank Patton thinks he has found a way around all the fuss — specifically, a roughly 150-mile-long way around the city itself.

Patton admitted railroads “all thought I was nuts” when he first came up with the idea in 2010. Patton’s career has included software development, cancer prevention work and a successful battle with a brain tumor — but never railroading.

No matter, he said.

“All you had to do was look at the map,” he said, noting freight trains routinely take more than 24 hours to pass through Chicago. “Without knowing anything about rail — except that I had a model railroad as a kid — I said, ‘This would be a great place for a bypass.'”

Patton claims his Great Lakes Basin Belt Railroad — which would run from Mazon, Ill., to Kingsbury, Ind., with at least two initial tracks — would slash at least 16 hours from the current trip through Chicago while keeping potentially hazardous oil train traffic away from the most densely populated areas.

He isn’t the first one to have floated the idea for a bypass, and his plan mirrors the 50-mile Illiana Expressway project to streamline highway traffic between Illinois and Indiana (Greenwire, July 25, 2013). Patton thinks the time is right for a rail version, given tighter crude-by-rail routing rules and this year’s record, train-snarling snowfall that has left agricultural shipments weeks behind schedule (EnergyWire, March 20).

A quarter of the nation’s rail traffic passes through Chicago, or about 40,000 rail cars daily, according to the Illinois Department of Transportation. IDOT did not respond to requests for comment on the proposed Basin Belt Railroad, but the regulator has said in the past that the congestion affects movement of goods throughout the entire country. Illinois has poured hundreds of millions of dollars into the Create program to boost efficiencies among the six major railways serving the Chicago area. The federal government and the rail industry have also stepped in with funding.

But Patton noted that unlike Create, his bypass would lay down miles of new tracks, something the biggest railroads such as Warren Buffett’s BNSF Railway Co. haven’t been keen on doing.

“There isn’t enough business for any single railroad to justify it economically,” he said. “You have to have at least two, or really three or four [railroads] using it — and because of the anti-trust laws and the competitive nature between the independent Class I railroads, there’s no way that they could get together and do this.”

Patton said his Basin Belt Railroad would be open for all the Class I railroads to use — at a cost. But the project has plenty of its own cost hurdles to slog through first, given a price tag topping $3.5 billion.

Jim Pehta, marketing adviser for Great Lakes Basin, estimated that nearly 90 percent of the project can be financed through federal railroad loans. Still, some are doubtful the years-old idea will get off the ground.

Tom Vander Woude, deputy executive director of transportation and infrastructure at the South Suburban Mayors and Managers Association, said his group was adopting a “wait-and-see” attitude toward Patton’s railway and wasn’t ready to take an official position.

“We’re always interested in intermodal development and improved freight movement, so to the extent that [the Basin Belt Railway] would accomplish that, we would likely support it,” Vander Woude said. “And, we know some of the folks who have come up with the idea,” including Patton, who lives in the area.

Others have cautioned that the railroad can’t resolve long-standing concerns about the safety of moving crude oil and other hazardous liquids by rail. A deadly oil train derailment and explosion last July in Lac-Mégantic, Quebec, claimed 47 lives and spurred several new emergency orders and proposed safety rules in the U.S. and Canada.

Karen Darch, village president of Barrington, Illinois, which lies along CN’s recently acquired “bypass,” noted that alternate railways “are increasing the risk in those spots that would be the reroutes” by piling on more oil train traffic.

Darch, who is also co-chairwoman of TRAC (The Regional Answer to Canadian National), historically has been skeptical of crude-by-rail build-out and repeatedly has urged regulators to update safety standards for the outdated tank cars typically used to haul oil. The model DOT-111 tank cars failed catastrophically in Lac-Mégantic and also exploded in subsequent crashes in Alabama and near Casselton, North Dakota, although no one was hurt in those incidents.

“We recognize the importance of energy commerce to the country,” Darch said. “We’re encouraged that people have taken steps to make things safer, but our pivotal concern is still the tank car — whether it’s on a key route or a reroute, we get concerned about safety.”

Chicago leaders haven’t always been gung-ho about the city’s increasing role in oil logistics. Crude-by-rail shipments have shot up from fewer than 10,000 carloads in 2008 to more than 400,000 last year, driven by surging unconventional production in places such as North Dakota’s Bakken Shale.

Early this year, Chicago Mayor Rahm Emanuel proposed imposing a fee on the transport of all hazardous materials by rail, an idea that was quickly slammed by the industry-backed Association of American Railroads (EnergyWire, Jan. 24).

Though Patton’s Basin Belt Railroad could not be a cure-all for crude-by-rail worries, he said the current route doesn’t lead the tracks near any population centers. That could make it easier for railroads to divert oil trains around Chicago under voluntary urban speed limit rules and routing requirements set to take effect July 1, although Patton’s project wouldn’t be running until 2018 at the earliest.

He said the extended timelines prove he isn’t out to quickly capitalize on the bad traffic.

“The question is: Are you in this for a fast buck, or are you in this to build a railroad for the 21st century?” he said. “Maybe I’m being grandiose, but I’m 70 years old, and most of my life has passed. This is the legacy for myself and my children.”