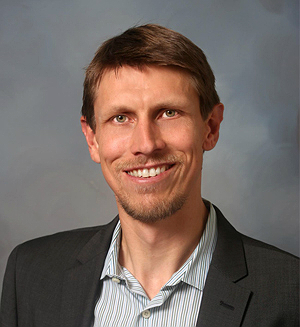 On April 3, startup companies will duke it out during the Clean Energy Challenge for $500,000 in prize money and the chance to attract new investors and partners. Here is the second of Midwest Energy News‘ series of profiles of four finalists.

A few years ago, Milwaukee resident McGee Young realized that even as a college professor with advanced degrees, he could not read his water bill. His usage was listed in cubic feet – “you could not get a worse way to communicate that to a regular person.”

This sparked Young about two years ago to develop a product, H2Oscore, that gives people real-time, accessible information about their water use and how it compares to other local homes. About three quarters of people who used the program reduced their water usage, Young’s team found.

“It’s getting more and more important from an ecological and pocketbook perspective to manage our water more effectively,” Young said. “For us that started with better information.”

Now they are applying that model to energy with their entry in the Clean Energy Challenge: MeterHero, a program that gives people information about their energy (electricity and natural gas) use and a roadmap to reduce it, bundled along with the information about water use.

Young notes that reducing water use is also an important way to save energy, since large amounts of energy are used to pump and purify water for municipal and industrial use. On the individual household level, using hot water for showers or washing machines also means using gas or electricity to heat it.

MeterHero has experimented with pilot projects offering different models for obtaining and comparing energy and water use. The key is specific and fast feedback, Young said. MeterHero customers are taught how to enter information from their meters into an online dashboard that churns out a user-friendly set of data.

“The utility bill coming once a quarter was not doing it for most people – that’s too long to wait to figure out if what you’re doing is making an impact or not,” he said. “We want to see the information all together so we can integrate utility data from water, electricity and gas…And we want you to see what the difference is when you do dishes by hand versus with the dishwasher. Maybe it’s not much of a difference at all. Maybe you see a significant difference when you do something else, like stop watering your grass.”

MeterHero offers free service for up to four meters per household, with extra services and more meter readings available for a modest subscription fee. Young calls the business model “the Dropbox of utilities.” He said about a dozen schools are using MeterHero or H2Oscore in their lesson plans: “Students go home and read their meters for a week or a month, then come back in class and do math, science, reading and blogging based on it.” Five Wisconsin utilities also have contracts with either MeterHero or H2Oscore, offering the program to their customers through their own websites.

Young has had a keen awareness of water and resource issues since childhood. In Florida he was a delivery boy for an environmental newsletter his mother published, and the family also lived in California, where they experienced one of the state’s infamous droughts.

“It really struck a nerve how precious those resources are,” he said. “One day they’re there, the next day they’re not. As a kid you see these rivers that are so awesome and powerful, they seem to be endless. For that to just go away was really unsettling.”

He started his career in political science, which he taught at Marquette University. But one thing led to another and now he’s on leave to focus full time on MeterHero, which officially launched in February.

Young said he “didn’t really know what I was getting into” when he started developing meter-reading software.

“But then everybody liked it and I saw there was a big opportunity here to make a big difference. You realize you could write more books that no one really reads, or do something really impactful.”