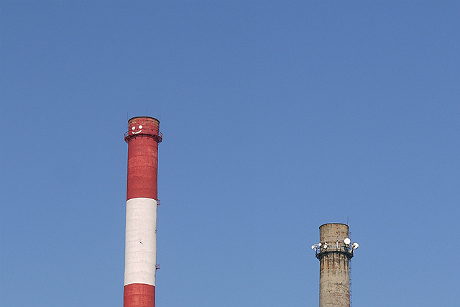 The Heartland Institute, a Chicago-based libertarian group, is raising its rhetoric a notch by claiming that rising greenhouse gas levels will actually help the world more than harm it.

The group points to increased plant and forest growth, bigger crop yields and longer growing seasons as benefits derived from rising concentrations of carbon dioxide. The assertions are made in a 150-page report that reviews studies, some going back to the 1980s, that Heartland officials say are purposely ignored by scientists contributing to the United Nations’ Intergovernmental Panel on Climate Change.

Altogether, Heartland says, the economic and scientific benefits of a warming world “greatly exceed any plausible estimate of its costs.”

The group, which lost many of its corporate donors and about a dozen fellows and employees after engaging in a controversial campaign against climate advocates two years ago, seems to have found a second wind. It claims that wildlife, ecosystems and humans could benefit from warming.

Heartland President Joe Bast, who has criticized conservative organizations that engage in policies to limit greenhouse gas emissions, declined to be interviewed. Craig Idso, who has a doctorate in geography and is a co-author of the Heartland report, blamed the IPCC for having “downplayed or ignored” the benefits of increased carbon dioxide.

“Despite thousands of scientific articles affirming numerous benefits of rising temperatures and atmospheric CO2, IPCC makes almost no mention of any positive externalities resulting from such,” Idso said in a statement.

Mainstream scientists have said for years that the fertilizing effect of carbon dioxide and, to some degree, warming temperatures could boost some plant and crop growth. The U.S. Department of Agriculture noted in a major report last year that more carbon could increase yields of wheat, rice and soybeans by up to 15 percent.

But those are narrow benefits that don’t consider the wider impacts of higher concentrations of greenhouse gases in the atmosphere, such as their effect on rainfall, sea-level rise and droughts, experts say.

“While we have certainly discovered some limited areas in which climate change will benefit us — for example, by decreasing the number of cold-related illnesses and deaths — the vast majority of research shows that even in northern countries like Canada, the negative impacts of climate change will outweigh the benefits,” said Katharine Hayhoe, an atmospheric scientist at Texas Tech University.

A world of ‘bigger and better plants’?

That’s because everything in our society — from the way houses are built to the way crops are planted — assumes that the climate will act within a certain range of behavior, said Hayhoe. The hot years will even out the cold years. The wet ones will be offset by the dry ones. This idea of “stationarity” assumes that the climate will act within a known envelope of high and low extremes. Climate change is extending the range of those extremes, some scientists say, leading to the notion that “stationarity is dead.”

“We assume that it’s all going to average out,” said Hayhoe, a lead author of the U.S. National Climate Assessment, due to be released next month. “It’s challenging the very assumption on which our society is built, and that is why the majority of the impacts will be negative.”

Now, for example, the high temperature extremes in some regions are twice as frequent as the extreme lows. Some places in the world are seeing new wet extremes, while others are seeing new dry ones.

Even some of the benefits that the Heartland Institute draws on might be short-lived. There are limits to the advantages of increased carbon on plants. Richard Adams, a professor emeritus of agricultural economics at Oregon State University, calls this the law of diminishing returns.

“If it were possible to increase plant growth by just continuing to dump inputs [like CO2] into the plant’s environment, you could grow the world’s food supply in 1 acre of land,” said Adams, who noted that he’s not philosophically opposed to Heartland’s worldview. “That’s really the underlying point: At what level will that CO2 benefit essentially cease to increase yields?”

On this point, Heartland seems to generalize about the benefits of CO2. In its report, which Heartland officials will formally release on April 9, the think tank says, “The more CO2 there is in the air, the bigger and better plants grow.”

Plants won’t be affected just by the gas. Rising temperatures will lend a hand, too. They might extend the growing season or the planting region. A few decades ago, North Dakota wasn’t in the Corn Belt. Now it is.

But these benefits — and some experts won’t call them that — stand to come and go within several decades. Plants grow optimally at a precise temperature, and less optimally when temperatures fluctuate a few degrees up or down from there. If temperatures rise beyond the envelope of a plant’s capacity, green turns to brown.

“Whatever benefit we may derive from CO2 may be partially or completely removed by the increases in temperature,” said Paul Gepts, a professor of plant sciences at the University of California, Davis.

The common bean — like black or pinto beans — grows best at 75 degrees Fahrenheit, on average. If greenhouse gases push the average temperature during a season past 82 or 86 degrees, “it becomes really stressful” for the plant, Gepts said.

“Above that, for sure, you’re going to see sharp decreases” in bean yields, he said, noting that climate scientists say that could happen later in this century. He anticipates that bean crops, currently grown in the Upper Midwest, will eventually be found in Canada. But that will require new farms, new equipment and a new distribution network, all of which are expensive. And the shift is happening faster than previous disruptions, like when the Little Ice Age, about 500 years ago, caused perhaps the biggest tremors to agriculture in 10,000 years.

“Just a small magnitude [of temperature change] created disruption in agriculture, [with] famine and so on,” Gepts said. “So here we are looking at a much bigger change. So it’s probably going to create an even bigger disruption.”

The IPCC seems to reinforce that. The group’s report on impacts of and adaptation and vulnerability to climate change, due to be released Sunday, is expected to say that the overall impact of warming threatens the world’s food supply by reducing food production by as much as 2 percent per decade through 2100.

“Climate related hazards affect poor people’s lives directly through impacts on livelihoods, such as reductions in crop yields or destruction of homes, and indirectly through increased food prices and food insecurity,” said a final draft of the IPCC’s fifth assessment report, which was leaked last fall.

Should you grow corn in the tundra?

The Heartland Institute’s focus on the benefits of carbon dioxide fits within its economic argument on climate change: The warming is too small to bother with and any government policy to do so would be harmful to the economy.

One person who is active in conservative policy circles believes that the group’s focus on the benefits of carbon dioxide is meant as an argument against a carbon tax, which some conservative think tanks have been promoting.

By saying CO2 has economic benefits, the group is arguing that a tax on emissions would harm productivity rather than just discourage pollution, this person said.

“It’s an argument that specifically counters carbon tax,” the source said. “That’s what’s advantageous about it to them.”

One researcher says that the benefits of increased leafiness from carbon dioxide are outweighed by the gas’s contribution to warming. In the sub-Arctic tundra of Alaska, Susan Natali, an assistant scientist at the Woods Hole Research Center, found that plants get greener and bigger when melting permafrost releases carbon dioxide. That means the plants act as a carbon sink.

But there’s a problem. The permafrost is releasing more carbon than the plants can take in. Her experiments showed that almost twice as much gas could be released after 2050 as the permafrost melts. That could contribute further to climate change.

Asked about the idea that the tundra could be converted into farm fields, Natali laughed. The soil doesn’t hold enough nutrients and the sun isn’t bright enough. It would be easier, she said, to keep the cornfields where they are.

“I think it would be a better idea to reduce fossil fuel emissions,” Natali said. “It would be a lot simpler.”