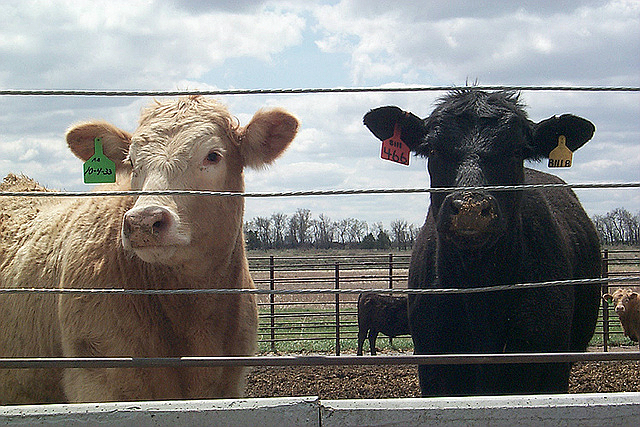 Equare says its waste-to-energy technology can convert cattle manure and other sources into energy with zero emissions. (Photo by NDSU Ag Communications via Creative Commons)

Part three of a four-part series

On April 3, startup companies will duke it out during the Clean Energy Challenge for $500,000 in prize money and the chance to attract new investors and partners. Here is the third of Midwest Energy News‘ series of profiles of four finalists.

Equares Energy Company turns one of the most noxious and despised types of waste – manure from concentrated animal operations like dairies and feedlots – into power, without producing any emissions.

A contraption called the CleanStream Reformer 140 heats waste to a point that it breaks down into hydrogen-rich syngas, which is then fed into a fuel cell that makes electricity in a non-combustion process.

The heat from the process can also be harnessed for onsite use, such as drying grain or warming an incubator for baby animals.

Equares CEO Laura Filbert Zacher’s grandparents were involved with cattle operations in Missouri. Zacher, based in St. Louis, says it is exciting that the Equares technology can improve air and water quality simultaneously by curbing waste runoff and generating distributed, decentralized electricity without emissions.

The technology is being launched to deal with animal waste, but it can also handle municipal solid waste and human waste, meaning it could divert waste from going into landfills. It can’t handle dirt or large things like tree stumps and metal beams, but other types of waste can all be fed into the unit, which is the size of a two-car garage and can process a ton of dry waste (or two tons of wet manure) a day. It uses a special type of fuel cell that – unlike most – can handle very hot gas.

A release from the company says that 400 Americans produce about a ton of waste per day, and running that waste through the CleanStream Reformer 140 could generate enough power to meet their needs. So small towns or institutions like hospitals or universities could use their waste to make all their electricity, without causing any pollution.

Equares is a wholly-owned subsidiary of Equitech International, which developed the technology to dispose of radioactive pharmaceutical waste for Westinghouse in the 1990s. Zacher explained that this use was no longer needed once laws changed to allow the burial of medical waste. So the company improved the technology to generate electricity.

The technology is ready to be deployed commercially though it has not yet hit the market, Zacher said. A pilot project is ongoing in the San Francisco area. Zacher said California is the perfect site for rollout, since it has many concentrated animal operations and also has high electricity rates. Down the line it is likely to be marketed in the Midwestern agricultural states with relatively higher electricity prices, like Michigan and Wisconsin.

“We had to have a laser focus on where to start – we started with the very serious problem of the amount of manure that are in these animal feeding operations that is not really being controlled very well,” Zacher said. “We have a patent to be able to use this technology for office buildings, and commercial, residential, multi-family buildings. We hope that in time we’re able to introduce this into these other markets.”