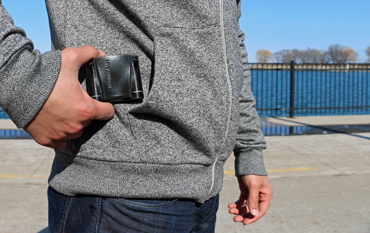 The myPower device uses motion from walking to charge a smartphone or other device. (courtesy photo)

Part four of a four-part series

On April 3, startup companies will duke it out during the Clean Energy Challenge for $500,000 in prize money and the chance to attract new investors and partners. Here is the last of Midwest Energy News‘ series of profiles of four finalists.

It’s a common dilemma for young urban professionals and students: they’re on the move all day, and constantly on their smartphones. As evening sets in, their active work life shifts to an active social life. But that’s often right when those omnipresent phones run out of battery power, cutting them off from friends and updates.

Chicago entrepreneur Tejas Shastry and his colleagues say they have a solution in myPower: a sleek, wearable device that harnesses kinetic energy from a workout or simply a busy day of dashing around, providing enough energy to charge a smart phone for up to five hours.

“One of the biggest things driving us is being able to use it ourselves,” said Shastry, who like co-creators Michael Geier and Alexander Smith is a runner and cyclist. “My phone normally dies on the train ride home. It’s really sad when you’re a young adult – that’s when your social life starts – you feel blocked off.”

Clean Energy Trust president Amy Francetic noted that myPower is “very creative in getting at these uber-connected users of technology, giving them constant access to battery power.”

The myPower device is meant to be clipped to the hip to capture maximum movement, but it can also work in a pocket or purse. The leg movements from biking, running and walking all charge the battery; but smooth forward movement does not – for example, you would not attach it to the frame of a bike. Shastry said the technology, which is proprietary, is somewhat similar to a shake flashlight or the system that makes a smartphone’s screen rotate when you turn it.

The device came out of the NUvention Energy class in the engineering school at Northwestern University, where the three co-creators are PhD students in materials science and engineering. They’ve since brought a designer on board too.

Developers of the monitoring operation Meter Genius, and SiNode Systems, a lithium ion battery company, were also previously students in this class.

MyPower has created prototypes with 3-D printers, and they are currently enlisting people to test the devices out in a pilot program. They are also currently working on a smart phone app that will track the wearer’s physical activity and explain how much electricity it is generating.

“It will remind you when and how to charge your phone, like if you walk 1,000 more steps, that will get (your phone) through another two hours,” said Shastry. “It tracks your fitness and keeps you charged throughout the day. It’s a motivator to keep moving.”