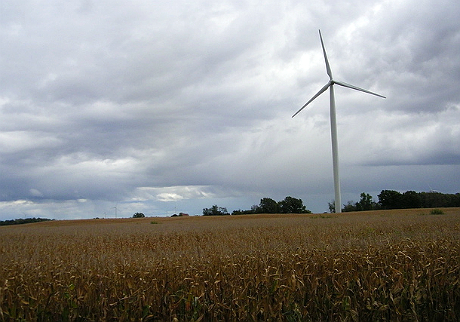 A wind turbine near Alma, Michigan. (Photo by Corey Seeman via Creative Commons)

With Michigan’s renewable energy standard set to expire at the end of 2015, and a high-profile fight over the standard in 2012 still fresh in many minds, debate has swirled about the costs and benefits of renewing or strengthening the law.

Amid the discussion, a recent study finds that Michigan could more than triple its renewable energy resources by 2030, with virtually no extra cost to consumers

Michigan’s current Renewable Energy Standard (RES) – created by a 2008 law – is among the least ambitious in the country. It requires just 10 percent of the state’s electricity to come from renewable sources by 2015.

Increasing Michigan’s standard to more than 30 percent is not only feasible, according to the March 12 report by the Union of Concerned Scientists, but would result in only a 0.3 percent increase for ratepayers over 15 years.

“That’s 30 cents on a hundred dollar bill, and you get all the benefits of renewable energy – carbon emissions reductions, reducing dependence on fossil fuels,” said UCS energy analyst Sam Gomberg. “Our analysis really builds on what’s already been done in the state – it’s another piece in the puzzle showing what Michigan’s energy future should look like.”

The UCS calls for a standard mandating that renewable energy make up 1.5 percent more of the state’s total energy mix each year, accounting for 32.5 percent by 2030. That is actually the same rate of gain enshrined in the state’s current standard, Gomberg explained.

The current standard didn’t require utilities to report results for about four years after the program was created. The UCS’s proposed program would require accounting every year for 15 years through 2030.

The UCS also evaluated a scenario that would culminate in renewables making up 17.5 percent of the energy mix by 2020. That situation would offer far fewer environmental, health and economic benefits, said the report, which used modeling methods developed by the National Renewable Energy Laboratory.

In recommendations included in the report, the UCS calls for the Michigan legislature and Governor Rick Snyder to pass legislation extending an RES that calls for at least 30 percent renewable energy by 2030. The report also recommends that Snyder or the legislature encourage or mandate that utilities sign long-term power purchase agreements with renewable providers, which should spark more construction of renewable energy projects.

Now renewable energy developers and investors are “pulling back,” in Gomberg’s words, “because they don’t have the certainty they need to know demand for renewable energy will be there beyond 2015.”

“Construction has already started on the last renewable energy projects to meet the current standard,” he added. “It’s also important from the utility side of things – what do they do with old coal-fired power plants? How much do they really start looking at natural gas?”

The report says that renewable power which helps meet the RES costs an average $78 per MWh, while building a new coal plant costs an estimated $133 per MWh.

Michigan utilities are considered to be firmly on target to meet the 2015 goal of 10 percent renewables. Utilities are allowed to recover the costs of their renewable investments from ratepayers, though those charges are capped at $3 per customer per month. The current RES requirement is mandatory, and utilities risk a fine for noncompliance.

Utilities also get credits toward the requirement for things including using in-state labor and production on projects and producing electricity during peak hours. “Triple credit” is given for solar PV energy. Gomberg says the UCS’s modeling assumed that such provisions would continue.

Michigan has many archaic coal plants, with its fleet named among the most vulnerable to closing by the UCS in its “Ripe for Retirement” report. The UCS identified 7,000 MW of Michigan coal-fired power as uneconomical and likely to go off-line.

In 2008, coal provided 60 percent of Michigan’s energy; by 2012 it was just 48 percent, with the price of coal in Michigan increasing 50 percent during that time. Natural gas generation from 2008 to 2012 increased from eight to 20 percent. And renewables not counting hydropower grew from 2.2 percent to 3.2 percent; with hydro providing 1.2 percent. The state also has significant reliance on nuclear power.

Shifting to renewables from coal would mean a more stable and secure energy base, the UCS argues, and a strengthened RES would facilitate this shift while offering other economic benefits.

The report projects $9.5 billion in new capital investment between 2016-2030. “Such investment would also generate millions of dollars in new tax revenue, expenditures on facility operation and maintenance, and wind power land lease payments for local communities.”

The UCS says there is plenty of potential for renewables to provide for a large portion of the state’s energy needs. In fact the union says onshore wind energy in Michigan could theoretically provide more than five times the energy the state used in 2012, and solar power including in urban areas could provide 71 percent of 2012 power used. That’s not to mention new geothermal, offshore wind, hydropower (installations could be added to existing dams) or other clean sources.

In 2012, Michigan voters rejected a proposal that would have increased the renewable energy standard to 25 percent by 2025. Polls had initially showed strong voter interest in Proposal 3, and former President Bill Clinton even voiced his support. Observers theorized that an influx of campaign spending from utilities and their representatives led to the measure’s ultimate defeat.

Gov. Snyder has announced his support for clean power in general and for replacing coal plants with renewables and natural gas.

Gomberg said there is no legislation pending or in the works that would extend Michigan’s RES. Despite strong public support for renewables, he doesn’t expect such legislation to pass any time soon.

“Even with the abundance of evidence that’s out there publicly and that’s been delivered to the Governor and that legislators have access to showing renewable energy is good for Michigan,” said Gomberg, “it’s frustrating that renewable energy is still a bit of a hot potato. All the evidence says that this is a good direction for Michigan to go in. But the political world is often different than reality.”