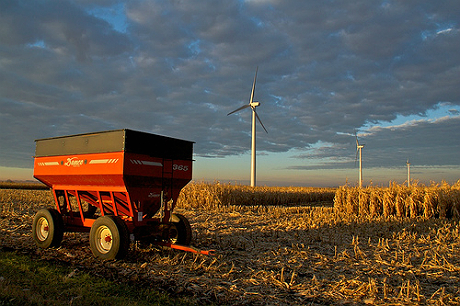 (Photo by PXLated via Creative Commons)

A legislative reform moving ahead in Minnesota aims to better position the state to become a wind energy exporter.

Minnesota has long been a wind energy leader. The state has nearly 3,000 megawatts of installed wind capacity, ranking it seventh in the nation.

Almost all of it’s been built for Minnesota customers. The state exports relatively little wind energy compared to neighboring Iowa or North Dakota.

It’s not for lack of resources. Minnesota has enough land and wind to conceivably generate nearly 500,000 megawatts of wind power.

“We have more [potential] wind energy in the state than we can develop ourselves, and we should use that resource,” said Ben Gerber, energy policy manager for the Minnesota Chamber of Commerce. “If we didn’t develop this it would be like North Dakota only developing the oil they needed in their state to meet their own needs.”

Over the last several months, Gerber worked with the wind industry and environmental groups to identify and target a potential regulatory barrier that may be deterring developers from trying to sell Minnesota wind energy into other states.

The bill they helped draft would exempt wind and solar power exporters from having to petition regulators for what’s known as a certificate of need — a determination that a project meets a need and is in the public’s best interest.

“The purpose of certificate of need is to protect electric ratepayers from unnecessary projects that a regulated utility would want to build to increase their rate base but not for the benefit of the electric system. It’s a protection against the monopoly power of the utility,” said Joe Sullivan, a regional policy manager for Wind on the Wires, a St. Paul nonprofit that works on wind and transmission issues. “If an [independent power producer] builds a project, it, not the electric ratepayers, takes on all the risk of failure or redundancy.”

Generally, utilities collect a rate of return on any projects or infrastructure they build, and so the more they build, the more money they make. The certificate-of-need process is meant as a check on that financial motivation.

Minnesota’s certificate-of-need statute was written at a time when most large energy facilities were built by utilities, but over the last two decades more projects are being developed by independent power producers, which sell the electricity to utilities.

The current law also requires large independent projects to prove a need to regulators, which Sullivan says gives developers an incentive to avoid Minnesota and build projects for export in neighboring states, which have similar or better wind resources.

“It’s not just a little headache. It’s kind of like a migraine headache,” Sullivan said, describing the certificate-of-need process that large projects have to go through.

The process can add around $200,000 in legal expenses and delay projects anywhere from six to 18 months, Sullivan said. The best example of a wind export project that encountered delays and expenses from a certificate-of-need process is the 205-megawatt Lakefield Wind Project in Jackson County, Sullivan said.

EDF Renewable Energy had a power purchase agreement to sell electricity from the wind farm to Indianapolis Power & Light Company. Questions about whether and how to apply the statute caused the process to stall at one point.

“We kind of got into a Catch-22 situation,” said Shanelle Evens Montana, a regulatory and legislative affairs associate with EDF Renewables.

The project was large enough to trigger a certificate of need proceeding, but Minnesota wasn’t necessarily in need of wind power at the moment, nor did it seem like that should apply, Evens Montana said. Meanwhile, it couldn’t prove a need in Indiana either because that state doesn’t have a certificate-of-need process.

Iowa, North Dakota and South Dakota do not require a certificate of need for independent projects that will sell out-of-state or to wholesale markets. Wisconsin combines the process with its site permit process.

The Minnesota legislation would put the state in line with its neighbors. It unanimously cleared a committee vote in both the House and Senate and has been incorporated into an omnibus energy bill.

The certificate-of-need reform doesn’t appear to be controversial, though Carol Overland, an attorney who has represented clients in wind farm need cases, said she is concerned the change will mean less opportunity for public input.

“Generally, I favor certificate-of-need review on all projects because we need to take a hard look at whether a project is needed, whether it is in the public interest, and what the real costs are,” Overland said.

Under the legislation, exempted projects would need to need to prove they have a power-purchase agreement with an out-of-state utility or give a notice to regulators that they intend to sell the power on the wholesale market. They would still be required to obtain site permits and conduct environmental reviews, if applicable.

Sullivan said it’s hard to guess how big an impact the legislation would have, but based on what he’s been told by wind developers, “it’s a big deal,” he said.

“It sends a signal that Minnesota is serious about exporting its wind resources,” Sullivan said.

Evens Montana said EDF is seeing growing interest in wind power across the country, including southeastern states such as Mississippi and Louisiana, which are being integrated into the Midwest’s electricity grid. The quality of Minnesota’s wind means projects in the state compete in those markets even after considering higher transmission costs, she said.

“Minnesota does have an opportunity to be very competitive with exports,” Evens Montana said.

Wind on the Wires is a member of RE-AMP, which publishes Midwest Energy News.