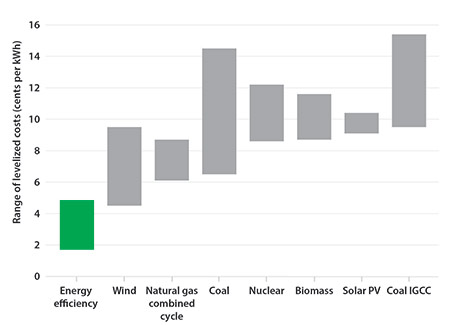 That’s the case even in states where a long history of energy-efficiency has pushed up the cost of squeezing out additional savings.

Those are among the findings of two recently-published studies, one by the Lawrence Berkeley National Laboratory (LBL), the other by the American Council for an Energy-Efficient Economy (ACEEE).

Together, the studies send “a signal to keep going” with more ambitious energy-efficiency efforts, said Rebecca Stanfield, a deputy director for policy at the Natural Resources Defense Council.

The ACEEE and NRDC are members of RE-AMP, which also publishes Midwest Energy News.

The LBL study collected data from 31 states; the ACEEE study is based on electricity data from 20 states, and natural-gas data from 10 states. Both studies calculate what’s known as the levelized cost of saved energy, or the cost per kilowatt hour of an efficiency measure when the upfront cost is spread over the projected lifetime of the investment.

The LBL study put the average cost of saved energy at about 2 cents per kilowatt hour. The ACEEE study estimated it at about 2.8 cents. The average cost of generating power from new sources, whether coal-fired plants or wind turbines, is typically at least two to three times that amount.

The cost of saved energy in Midwestern states was especially low, relative to other regions of the country. According to the LBL study, electricity efficiency measures in the Midwest cost about 1.4 cents per kilowatt hour. The authors of the ACEEE study calculated the cost of saved energy on a state-by-state basis and averaged over the years 2009 through 2012. It came to 2.6 cents per kilowatt hour in Minnesota, 1.9 cents in both Iowa and Illinois, and 1.7 cents in Michigan.

By contrast, the comparable figures are 4.5 cents in California and Connecticut, and 4.8 in Massachusetts. Those states require their utilities to wring much more energy use out of the system, with the result that the utilities’ customer-financed efficiency programs compensate customers for increasingly-costly efficiency technologies.

Even so, Stanfield said, “The interesting story is how much you can still get out of states that have been doing this for decades.”

A 2012 report from Michigan regulators looked at energy use in the state and found there was plenty of potential for low-cost efficiency improvements. The analysts found that very feasible improvements could reduce electricity use by 17 percent, and produce $2.55 in savings for every $1 invested. They found that more-extensive improvements could shave a total of 40 percent off current electric consumption.

And in Illinois, the state Commerce Commission has ordered utilities to continue aggressive efficiency efforts despite complaints that few “low-hanging fruit” opportunities — simple measures such as switching to high-efficiency light bulbs — remain.

The seemingly greater payoff of efficiency in the Midwest could be due to a couple of factors. Midwestern states, in general, instituted energy-efficiency programs later than many New England and western states. New efficiency programs, typically funded with utility money, usually target the cheapest targets first, meaning that the cost of saving energy at the outset is extremely low.

High-efficiency light bulbs typically are one of the first changes people make. While the average nationwide cost of saving energy is between 2 and 3 cents per kilowatt hour, the cost of saving energy with more efficient light bulbs is more like seven tenths of one cent, according to the LBL report. And not surprisingly, about 44 percent of energy saved in U.S. homes is due to the use of CFL or LED bulbs.

Efficiency programs generally move on to increasingly-costly energy-saving measures. In states that have made the greatest strides in cutting energy use, the cost of saved energy is typically the highest.

Another factor pushing up the cost of saving energy is the pace at which a state requires its utilities to cut energy sales, Stanfield said. Massachusetts, for example, requires a 2.5 percent reduction each year in the amount of electricity sold. The comparable figure in Illinois is 1.5 percent.

“As programs get more aggressive, they are more expensive,” Stanfield said. But even given that, she added, “They’re not more expensive than generation.”

Between 2006 and 2011, administrators of efficiency programs tripled what they spent on cutting electricity use from $1.6 billion to $4.8 billion annually, according to the ACEEE study. Spending on natural gas efficiency increased from $300 million to $1.1 billion over the same period.

Another Berkeley Lab study forecasts that figure possibly doubling – at least – by 2025.

And as efficiency grows and matures, the financial facts may look a bit less compelling.

However, Stanfield said, “There’s enormous, enormous potential in the Midwest, even in states that have been at it for a while. We’re not even close to maxing out cheap energy efficiency.”