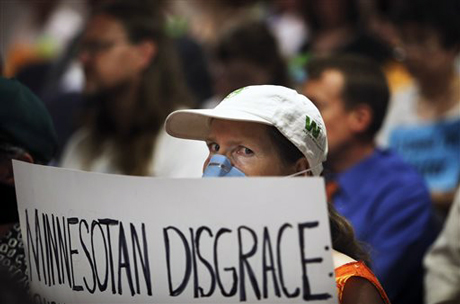 Marty Cobenais has been to every state along the proposed Keystone XL pipeline route, organizing resistance to the project from Montana to Texas.

He’s been arrested twice for civil disobedience during Keystone XL protests in front of the White House.

Now, the Bemidji man believes it’s time for pipeline activists around the country to turn their attention to his own backyard in northern Minnesota.

A trio of major pipeline projects proposed by Canadian fuel transporter Enbridge have been moving forward in Minnesota, mostly below the national radar.

“We need the national attention in Minnesota,” Cobenais said. Minnesota has sent busloads of protestors to Nebraska and Washington, D.C., he said. Now, “they should be here with us, too.”

There are signs that activists from outside the state are beginning to answer that call to action, as environmental groups begin to shift some resources and attention to Minnesota.

The event drew a few hundred protestors, including a busload of people from Wisconsin and others from Michigan, Illinois, and Indiana, according to organizers.

“It was such a show of support,” said Andy Pearson, a coordinator with 350.org’s Minnesota affiliate, MN350.

The rally was scheduled before a public hearing on a proposed expansion of Enbridge’s Line 67 or Alberta Clipper pipeline between southern Alberta and Superior, Wisconsin. The project would increase capacity from 570,000 barrels per day to 800,000 bpd.

Another project proposed last month would replace the company’s aging Line 3 pipeline, also between Alberta and Superior, boosting that line’s capacity from about 390,000 bpd to 760,000 bpd.

A third Enbridge proposal calls for building a new 610-mile pipeline that would move another 375,000 bpd to Superior from North Dakota and free up capacity elsewhere for Canadian tar sands oil, opponents say.

The public hearing last week preceded several days of expert testimony this week that is a result of the Alberta Clipper project being contested by Minnesota activists, Pearson said.

“This was not with national money or with national organizing. It was a bunch of folks in Minnesota who got together and said how much could we fundraise to hire a lawyer so that we could contest this thing that we believe to be morally wrong?” Pearson said.

Now, they’re seeing more support from groups like the Sierra Club and the National Wildlife Federation, he said.

‘The head of the snake’

Much of the new support stems from a December summit in St. Paul, when a coalition of environmental groups met to discuss tar sands opposition strategy and identified blocking the Minnesota projects as a top priority.

While other Midwest states such as Illinois and Michigan also have pipeline projects in the works, Minnesota is seen as critical because of its projects’ size and their position in the region’s pipeline system.

“That is the head of the snake, so to speak. If it is possible to prevent those expansions from going through, then it really renders everything else that Enbridge is doing as useless,” said Beth Wallace, one of the organizers of the December meeting. She was then a regional coordinator for the National Wildlife Federation based in Michigan, a position she’s since moved on from.

Whether or not the Minnesota cases become a national concern in the way Nebraska’s pipeline debates did may depend on the timing and outcome of the Keystone XL decision.

“If Keystone XL gets approved, then I think you’ll see a lot of the focus shifting to the Enbridge system,” said Paul Blackburn, a Minneapolis attorney who worked with Nebraska and South Dakota landowners on Keystone XL issues and now represents MN350.

One reason Nebraska became such a drawn-out battleground is that it didn’t have regulations on pipeline projects, Blackburn said. That led to a legislative fight that drew national attention.

Minnesota, though, has a well established regulatory process for pipelines, which limits the chances for a protracted, high-profile fight, Blackburn said.

Cobenais said he worries that if tar-sand opponents wait for Keystone XL to be resolved before getting involved in Minnesota, it might be too late.

“The way things are going with Keystone XL,” Cobenais said, “the permits and approvals for these other pipelines could be done well before the Keystone decision is ever made.”