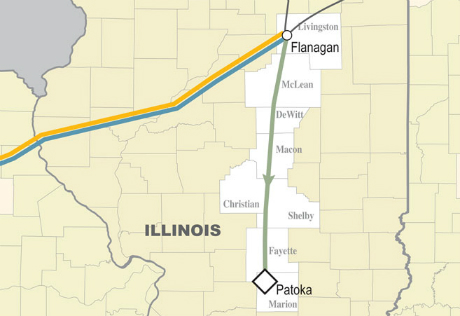 Canadian pipeline company Enbridge Inc. moved a step closer to being able to move ahead with an $800 million oil pipeline in Illinois — a project initially proposed almost eight years ago.

An administrative law judge on Thursday recommended that Enbridge be granted authority to use eminent domain to acquire easements across 127 tracts of land. The final decision will ultimately be made by the Illinois Commerce Commission.

The Southern Access Extension pipeline would cross eight counties and 165 miles directly south from the company’s Flanagan oil terminal at Pontiac, Illinois, to an oil terminal and pipeline hub at Patoka.

The 24-inch-diameter line is just one piece of a much broader strategy by Enbridge to expand its network of North American oil pipelines, and the Southern Access Extension, itself, has evolved since it was proposed.

Calgary, Alberta-based Enbridge won ICC approval to construct the pipeline in 2009. But the commission decided it was premature to grant eminent domain authority and said additional negotiations with landowners was required.

At the time it was proposed by Enbridge in 2006, the pipeline was seen as a way to move heavy Canadian crude from Alberta’s oil sands to refineries in the Midwest, Gulf Coast and eastern United States.

Enbridge, which had staged miles of pipe in a field in Illinois and was ready to begin construction of the project, put it on hold while landowners appealed the commission’s decision in court. Then the Great Recession and shifting oil markets softened demand and shippers hesitated to commit to additional pipeline capacity.

But a resurgence of domestic oil production, specifically from the Bakken Shale formation, revived interest.

Today, the Southern Access Extension is part of Enbridge’s $6.2 billion Light Oil Market Access Program to move light oil from the Bakken to refineries in the Midwest and eastern Canada. And one of the nation’s largest refiners signed on as an anchor shipper.

With renewed interest in the pipeline, Enbridge returned to the commission last summer, saying it had exhausted negotiation efforts and that it was at an impasse with owners of about a fourth of 679 tracts of land that the pipeline would cross. The company subsequently secured some additional easements, but as of December remained at a standstill with owners of 127 tracts.

In his proposed order released Friday, the administrative judge said Enbridge had satisfied requirements under Illinois law to be granted eminent domain authority.

Thomas Pliura, an Illinois attorney for some of the landowners, believes evidence demonstrates otherwise and is hopeful that the commission will veer away from the proposed order and deny Enbridge’s request. If it is approved, he said, it could be appealed in the courts.

“If anybody thinks that that pipeline is going in tomorrow, then they’re mistaken,” Pliura said.

An Enbridge spokesman didn’t return a call seeking comment on the proposed order.

The company has said as recently as January that it plans to begin construction of the pipeline later this year and have it in service by mid-2015.

Findlay, Ohio-based Marathon Petroleum Corp. has agreed to be the anchor shipper on the Southern Access Extension and has an option to buy a 35 percent ownership interest in the pipeline.