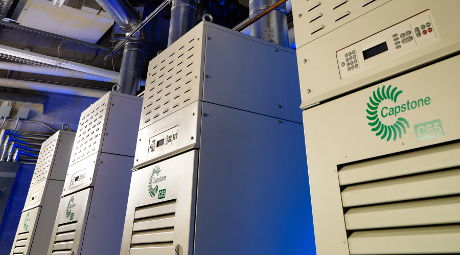 However, speakers and program attendees say, Ohio’s regulatory and legislative landscape have made it harder for businesses to reap those benefits.

The good and bad news for CHP is part of the bigger picture for energy efficiency in Ohio.

On the “good news” front, the American Council for an Energy-Efficient Economy (ACEEE) issued a new report finding that Ohio and other states with energy efficiency standards have already saved enough electricity to power nearly 2 million homes for a year.

Meanwhile, the Ohio Senate’s Public Utilities Committee continued hearings on Senate Bill 310. That bill would cancel any additional energy efficiency targets after 2014. If enacted, the bill would eliminate another potential benefit for CHP.

Combined heat and power projects typically use one fuel to provide electricity along with heat and/or cooling – similar to how heat from a car’s engine is also used to warm the interior in winter. Energy Ohio Network’s program in Independence, Ohio, focused on how businesses can make CHP part of their own or their customers’ operations.

Energy Ohio Network favors a mixed portfolio of energy technologies. Its website includes pages on shale resources and development, plus links to material on other types of fossil fuels, biomass, distributed generation, and advanced energy technologies.

CHP projects have high efficiencies because one fuel does double or triple duty, explains program attendee David Blair, a vice-president of GEM Energy in Independence, Ohio.

GEM Energy’s CHP projects use Capstone microturbines. The units are basically small jet engines that run on natural gas or other fuels.

“The spinning motion of the jet engine is used to generate electricity,” explains Blair.

Each of GEM’s units is about the size of an office desk. At the other end of the scale are the 40-foot-long Meganinja and other large generator sets like those made by Mitsubishi.

Energy efficiency is one big appeal for CHP projects. “We can achieve 86 percent total efficiency” by using “waste heat that would have gone out of the stack anyway,” says Mitsubishi’s Bart Sowa.

Higher efficiency translates into lower fuel costs. For example, microturbines from GEM Energy plus other energy-related improvements are saving the Toledo Museum of Art thousands of dollars per month.

Another proposed project could save an Ohio client $400,000 per year in energy costs, notes Jamie Landers of Cincinnati engineering firm Fosdick & Hilmer.

Reliability and resiliency are also important. If a blackout or natural disaster happens, CHP can keep a facility going.

“The most reliable generator when the grid goes down is one that’s already running,” notes Grant.

“Climate change is unfortunately with us, and we’re going to have to live with the costs of that,” says Grant.

And while natural gas seems plentiful now, that may not always be true, says Blair.

“We’ve got to be better stewards of our natural resources. We think there’s abundance around us, and we think we can waste it. That’s not true,” Blair adds.

Despite the advantages, CHP can be a hard sell for companies looking for quick returns on investment.

“Businesses often look at paybacks in the neighborhood of two to three years,” says Blair. CHP projects generally won’t achieve that without some kind of support.

Some customers may accept a four- or five-year payback for an energy program, especially if it reduces a facility’s overall emissions, says Bobby Oakwood of Siemens Energy in Cincinnati. “But that’s because it’s energy efficiency,” he says.

One plastics company in Marietta, Ohio, was able to proceed because a Michigan energy company retained ownership of its 7.5 MW CHP system, reports Landers. The plastics company buys energy at a reduced rate. The Michigan company gets those payments plus any tax credits or other benefits.

A 2012 law lets CHP projects count as energy efficiency under the state’s standard. The Public Utilities Commission of Ohio is currently reviewing rules to implement that part of the law.

However, Senate Bill 310 would cancel any additional energy efficiency targets after 2014. If legislators pass the bill, they would eliminate that benefit for CHP.

More complications come from Ohio’s regulatory structure and tariffs. Even if a company produces all its electricity on site, Ohio electric utilities can still collect charges.

Landers cited one example where utility charges could eat up $100,000 of a project’s expected $400,000 of annual savings.

Some utility charges are valid, notes Neal Elliott at ACEEE in Washington, D.C. For example, a substation charge is appropriate if a CHP unit sells power back to the grid or needs the connection for reliability and backup.

However, Elliott says, any utility charges should be “fair, just and reasonable, and nondiscriminatory.” Too often, he says, riders are designed to favor utilities.

“In some cases, how they structure these riders [is] intended to discourage folks from doing stuff that the utility finds is not in their financial interests,” notes Elliott.

Those costs further extend the time it could take a project to pay back its costs. Or, they could discourage companies from undertaking new CHP projects in the first place.

“Energy efficiency is doing good things for utility customers in Ohio,” stresses Elliott. The new study released by ACEEE on Wednesday finds that Ohio has achieved about 150 percent of the energy efficiency standard’s targets so far.

Another ACEEE study released last year projected the energy efficiency standard could save Ohio consumers more than $5.5 billion through 2020.

Much of those savings will come from not having to buy extra electricity, explains Elliott.

More savings will come from effects on the wholesale energy market, Elliott adds. Lower demand means less need for the most expensive forms of power.

“That $5.5 billion is in jeopardy right now if Senate Bill 310 goes into effect,” says Elliott.

“In reality, there are projects that are occurring,” despite utility tariffs and other issues, notes Traves.

“There’s a quiet revolution in electric power that’s going on,” adds Blair. “It’s going to happen regardless of what is going on in Columbus.”

Yet how much Ohio benefits compared to other states could depend on how legislators act.

“The worst thing that they’re doing right now is promoting uncertainty,” says Blair. “They’re sending out this message that we don’t know which way to go, and we’re going to move backwards instead of forward.”

“Private enterprise cannot handle uncertainty. It creates a disruption in the business plans of not only our company but other companies,” adds Blair.

“When you’re looking at doing a multimillion dollar investment, you want to knock off as much uncertainty as you can,” says Landers. Not knowing what the law will be is “frustrating to the people trying to make the decisions.”

ACEEE is a member of RE-AMP, which publishes Midwest Energy News.