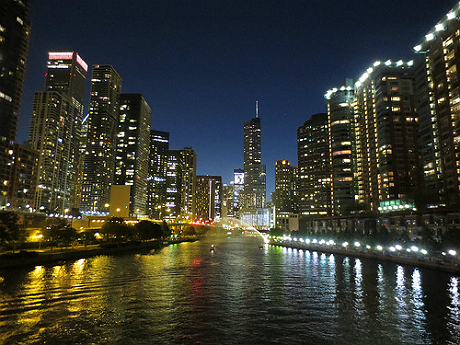 Chicago is among ten cities participating in the City Energy Project. (Photo by Edward Stojakovic via Creative Commons)

Advocates in Chicago want their city to be the most energy efficient in the nation. But they’ll need a little help to get there.

The city is part of a national effort to cut energy bills by as much as $1 billion nationwide and achieve emissions reductions equivalent to taking a million cars off the road.

The City Energy Project, launched in January, brings together ten U.S. cities in reducing emissions by increasing efficiency at large buildings. A joint effort of the Natural Resources Defense Council (NRDC) and the Institute for Market Transformation, it is funded by Bloomberg Philanthropies, the Doris Duke Charitable Foundation and The Kresge Foundation.

(The NRDC is a member of RE-AMP, which also publishes Midwest Energy News.)

The new project builds on energy efficiency programs that each city already has underway or in the works, by funding a full-time consultant in each city, supporting outreach and education and also facilitating interaction between the cities to share best practices and ideas. As part of the project each city will draft a comprehensive energy efficiency strategy and plan.

The other participating cities are Atlanta, Boston, Denver, Houston, Kansas City, Los Angeles, Orlando, Philadelphia and Salt Lake City. Laurie Kerr, director of the City Energy Project for the NRDC, said that in the future it could be expanded to involve more participants.

“There are a lot of models out there – we’ll be helping walk some of the cities through the options,” said Kerr. “There are a mixture of options cities are looking at – some are ordinances, some are policies or programs, ways of providing financing, working with a Property Assessed Clean Energy (PACE) program or creating an energy efficiency financing entity.

Kerr said the project aims to create ongoing dialogue between cities, so city experts can ask each questions about what’s working and what isn’t.

The consultant in each city is subsidized for a relatively lengthy three-year period since, Kerr said, “these policies take a long time to implement well. We’re not just there when they adopt it.”

Most cities are still in the process of hiring the consultants, which would typically be local experts already working in the field.

The project will also provide funding for city officials to work with local non-profits – like U.S. Green Building Council chapters or chambers of commerce – to do outreach and education about energy efficiency in buildings.

Large buildings – including private businesses or residential high rises, government offices, hospitals, universities and museums — are considered major contributors to climate change. They use vast amounts of energy and are often highly inefficient, both in terms of structural components and practices like unnecessary use of heat, air or lights.

A press release from the City Energy Project notes:

“Buildings are the largest single source of U.S. carbon emissions, representing 40 percent nationwide – more than either the transportation or industrial sectors. That number is even more dramatic at the city level, with more than half of carbon emissions in most U.S. cities coming from buildings – and in some cities as much as 75 percent. Much of the energy these buildings use, however, is wasted.”

The City Energy Project will dovetail with Retrofit Chicago, a public-private energy efficiency program launched in 2012 with commercial, residential and municipal building components.

Stanfield said a few other cities, including San Francisco, Seattle and New York, are “a little bit ahead of Chicago” in energy efficiency at the moment, but Chicago leaders aim to “leapfrog over other cities.”

“Our goal is to be the most efficient in the nation, to have New York and Seattle asking, ‘How do you do that?’” said Stanfield, adding that the City Energy Project could “put Chicago head and shoulders above other cities” on building efficiency.

Kerr noted that getting information on how much energy buildings are using is critical, and Chicago’s benchmarking ordinance is a good model in doing that.

Adopted in September 2013, the ordinance requires all buildings over 50,000 square feet to track and report their energy use, with verification by a third party. New York – where buildings account for about 80 percent of the carbon footprint — instituted an ambitious energy efficiency and benchmarking plan for buildings in 2009.

“Chicago is one of the earlier ones out of the gate,” said Kerr. “Chicago has passed its [benchmarking] ordinance and is working to implement it; most of these cities have not done anything like that yet. Other cities might have done more with, say, energy code compliance or improving the efficiency of their municipal building stock. There are different strategies. No city is the complete leader on everything.”

Stanfield noted that while some buildings will “never be in that top leadership class,” increased awareness and transparency about efficiency will push even the laggards to a higher level.

“With policies like benchmarking you have the potential to bring all the rest of the buildings up to a minimum standard,” she said. “For the first time ever, people will be able to make decisions about which building to lease office space in based on energy efficiency.”

“Most building operators are not trained to manage energy use, and they’re not rewarded financially or otherwise on the basis of how well they manage building energy use,” Stanfield said. “Having someone in the building continuously looking for opportunities to make it more efficient can be a huge driver of improvement.”

Stanfield said data showing Retrofit’s progress should be available soon, and that the program is on track to make 20 percent energy use reductions in five years.

A ‘hub’ for other cities

Dennis Murphey, chief environmental officer of Kansas City, Missouri, doesn’t mind admitting that Chicago is ahead on the energy efficiency front. But he said the City Energy Project is helping local leaders learn from Chicago and otherwise step up their game, augmenting efficiency initiatives that are already ongoing.

“We have very high expectations of what we’re going to be able to do over the next three years that will affect us for decades to come,” said Murphey, noting that local efficiency advocates also look to Philadelphia as an example. “It will have a huge impact if we make this as successful as we hope in ten cities. It will be a hub to push it out to other cities in the region, like Tulsa, Des Moines, Oklahoma City.”

Murphey noted that reducing energy use is especially important in a place like Kansas City that gets most of its energy – about 75 percent – from coal-fired power. That means cutting energy use more directly drives carbon emissions reductions than in cities that get more power from hydro, wind or natural gas.

City Energy Project funding has already been used to hire a part-time staffer who had been working on efficiency issues through the Chamber of Commerce, Murphey noted, and they are in the process of hiring a full-time efficiency expert. The city is tracking project progress on a blog.

Among other things, Murphey said Kansas City leaders will leverage the City Energy Project to push for state legislation that gives utilities more motivation to increase energy efficiency, “to make it possible for a utility to be a real partner with us.”

Kansas City already has important successes to point to. The city council passed an ordinance giving developers access to PACE funding. And they’ve renovated City Hall — a 29-story, World War II-era building — to obtain a top efficiency rating. City leaders are also working with the Missouri Clean Energy District, an entity authorized by 2010 state legislation that works with counties and municipalities on PACE and other clean energy initiatives.

“We intend to do a lot of education and outreach to make the business case to building owners who have not already made improvements,” Murphey said. “We’ll help them identify financial resources and service providers…And we’re having early adopters make the case so it’s not just the city or the NRDC telling the story.”