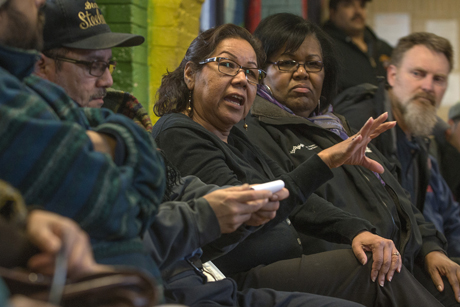 Feeling that elected officials have betrayed them in the battle over piles of petroleum coke on the Southeast Side of Chicago, residents have vowed to take the fight to the streets and into their own hands.

In unseasonably frigid temperatures at a local park Tuesday evening, they discussed a march planned for April 26, ongoing protests and the idea of boycotting BP, whose Whiting, Indiana refinery is the source of the “petcoke” piling up along the Calumet River.

In February, Emanuel and Pope announced an ordinance that would have prevented the expansion of petcoke storage and imposed requirements on existing piles.

But residents are furious that at the April 1 City Council meeting where the zoning committee was to vote on the ordinance, a substitute ordinance was introduced that allows continued increased petcoke storage provided the material is burned on-site.

Residents and Chicago environmental lawyers and policy experts think this could mean the revival of a highly contentious proposal for a plant that would make synthetic gas from coal and petcoke.

Leucadia National Corp. had previously proposed building such a gasification plant on the same parcel of land where the petcoke is now being stored. An affiliate of concrete company Ozinga Bros. has also proposed locating a cement plant nearby that could be powered by petcoke.

On April 24, the City Council’s zoning committee will consider the substitute ordinance; they did not vote on it previously when met with outcry over the last-minute revision. Once an ordinance passes in committee, it can go for a full Council vote.

“We definitely have been lied to and misrepresented by our aldermen,” said Olga Bautista, a lifelong Southeast Side resident. “There are other companies going to come in there – that’s why they changed the ordinance.”

The Leucadia plan was tabled after Governor Pat Quinn vetoed legislation that would have committed Chicagoans to pay a fixed rate for synthetic gas from the plant for 30 years, even if market natural gas prices were much lower. The veto came after significant opposition from local residents, consumer watchdogs and environmental groups.

“It was a brutal fight, and so grassroots,” said Bautista. “But they just wait you out, and then they come back.”

Henry Henderson, Midwest program director of the Natural Resources Defense Council, said the idea of a gasification plant on the Southeast Side likely had a lot to do with the ordinance’s revision. The substitute ordinance facilitating on-site petcoke use “would be anchoring in the continued movement of petcoke into our community,” he said.

“We don’t want this to happen. Having it in a high-density community exposes people to a waste that is easily wind-blown and when inhaled causes irreparable damage to the lungs. This should not be in dense residential communities.”

Henderson spoke a few days before the April 15 meeting, which NRDC publicized but did not take part in.

‘We have to fight’

Members of the Southeast Side Coalition to Ban Pet Coke said they plan to attend the April 24 City Council meeting and visit Alderman Pope’s offices, demanding the ordinance be voted down and replaced with strict limits on petcoke in Chicago.

“We want all the petcoke removed,” said Bautista.

Illinois Attorney General Madigan has filed lawsuits against both companies storing petcoke, and state legislators have also been talking about the issue. But at the coalition’s recent meeting, Southeast Environmental Task Force leader Peggy Salazar said the politics don’t look promising on the state level. She urged residents to focus on the Chicago situation.

She said locals feel betrayed by Pope, “and Rahm Emanuel, who came here and spewed these tough words…But he doesn’t uphold them… If we can’t trust them, we have to do it ourselves.”

“We’re humans – you’re taking our human rights and our civil rights, this is discrimination, this is racism,” he said, in Spanish. “We have to fight, all of Chicago needs to.

“People of 18th Street, people of 26th Street,” he continued, referring to the Chicago neighborhoods — Pilsen and Little Village — that are home to two coal plants that closed in 2012 after years of community struggle. “Whichever barrio in Chicago, we need you, they are discriminating here!”

Meeting in a mural-covered field house following the press conference, the residents discussed strategy and upcoming events. They were joined by people from the north side of Chicago and from Indiana who are leading larger campaigns against tar sands refining.

Sheila Garland, a member of the National Nurses Organizing Committee labor union, said, “Nurses across the city stand in solidarity with communities affected by the finagling, disinterest and onerous practices of these companies.”

As Bautista described how petcoke dust landed on a family member’s plate during a birthday dinner, her young daughter interrupted, requesting to make a statement.

“I love my mom but my mom works a lot to get rid of petcoke,” she said shyly.

Tic Esquivel has lived his whole life in the area. A musician, he now helps organize youth music and art programs connected with a collective called Under the Bridge Studios.

In the summers he and friends host the Vlados Music and Arts Festival near the Calumet River. Last summer for the first time they noticed the petcoke piles forming a backdrop to the stage. During this year’s festival July 12, Esquivel said, they will incorporate petcoke activism.

“I assure you over the next few months we’ll get a lot more people involved,” Esquivel said. “A lot of people still don’t really know or care. But we’ve been educating ourselves, and hopefully we will be able to open their eyes and get them mad. We have to keep getting louder and louder and stronger and stronger. Because this is not a dumping ground, this is our home.”