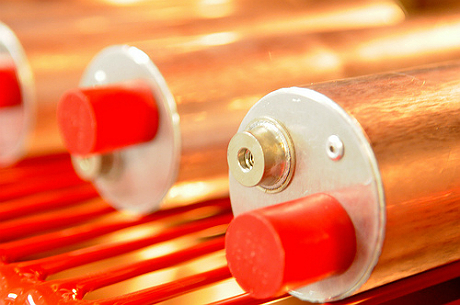 Ken Munson, CEO of Stockton, California-based startup Sunverge Energy, doesn’t want you to think of his company’s product as a “battery in a box,” backing up a roof full of solar panels — even if that’s one very accurate way to describe what it packages up into a closet-sized, UL-certified form.

Instead, he’d like you to consider the Solar Integration System as an energy manager for the modern, solar-PV-equipped home — and, importantly, one that utilities see as an asset, not a threat.

“We’re very utility-centric,” Munson said in a March interview. “We believe that, inherently, a utility focus, utility ownership, even utility rate-basing [of] our devices as an asset, is where the industry is moving.” That’s a view that doesn’t align with the ‘customer-owned solar+storage=utility existential threat’ views we’ve seen expressed lately. It’s also a departure from the way that competitors like SolarCity or Stem have targeted building owners as their storage customers.

But with 2 megawatts of its systems deployed from Sacramento, California to Auckland, New Zealand, Sunverge is on its way to getting a pretty broad set of test utilities for its behind-the-meter storage platform. In fact, Sunverge ranks third behind SolarCity and Stem in terms of total megawatts of advanced battery projects planned in California, according to the state’s Self-Generation Incentive Program records. With California regulators moving to break a year-long impasse between utilities and customers over how to connect battery-backed solar systems to the grid, those projects could accelerate in the months to come.

Now Sunverge is turning to the next phase of its plans: networking those distributed solar-storage systems into a virtual power plant that is able to store, shift and balance electricity at grid scale. “Stuffing lithium-ion or flow or any kind of battery in a box and putting it in as a simple backup device is not that exciting,” Munson said. “But putting a cloud layer with real-time energy services on top, and being able to aggregate and control a fleet of devices on the grid in near-real time — that’s something special.”

Munson and Sunverge co-founder Dean Sanders worked in the grid business together, at Sacramento-based grid switchgear manufacturer Inertia Engineering, before founding their startup in 2009. “We think we understand the distribution grid pretty well” as a result, Munson said, and that informed the way they approached the solar-storage concept.

“The more we got into it, the more we realized there was a potential for a confluence to occur in the market, with the level of penetration that solar was taking on, and the operation issues we were hearing about regarding distributed PV on the grid,” he said. (Greentech Media has been covering the challenges of distributed PV on grid operations.)

Backed by their own funds and an undisclosed amount of venture capital investment, Sunverge assembles batteries from undisclosed partners (though Munson described them as top-tier suppliers), as well as inverters from Schneider Electric, into what is otherwise its own system. That includes its own local IT hardware and power electronics controls, as well as its cloud-based software platform, which keep real-time tabs on its solar generation and battery capacity at each networked Solar Integration System, and allows each unit to balance that combination to meet different needs, he said.

That doesn’t exclude helping the customer, he noted. “On some grids, UPS [uninterruptible power supply] is of paramount importance. In California, demand charge mitigation, peak shaving, and time-of-use shifting in certain applications is important.” These are the kinds of applications being targeted by companies like Stem, Green Charge Networks and Coda Energy in the United States, Sonnenbatterie in Germany, and Panasonic in Japan. Likewise, “We can get into the whole-home automation component, where our system, via our Open API architecture, can aggregate plug-load devices or discrete devices,” he said.

At the same time, “we can aggregate resources on a circuit or a feeder, and start solving operational issues for the utility,” he added. That’s the kind of work underway at utility pilot projects around the world, but it has yet to be rolled out at mass scale — though companies like Intelligent Generation and Solar Grid Storage are exploring it in the context of larger, commercial-scale solar-battery deployments.

How solar-plus-batteries blurs the lines between utilities and customers

Sacramento Municipal Utility District (SMUD) is tapping Sunverge’s systems for a 34-home “net-zero-energy” development, which means each home is expected to generate more energy than it takes from the grid over the course of a year. That’s not exactly a welcome prospect for utilities that make money by selling electricity to homeowners, unless the units can simultaneously serve a purpose for the utility.

Patrick McCoy, SMUD’s solar program planner, told us in an October interview that the utility is looking at several potential uses for Sunverge’s systems, including the potential to shift solar energy from midday to late afternoon, when it’s in highest demand on the grid. SMUD is also involved in state- and federal-funded pilot projects that are modeling the ebb and flow of solar power on distribution circuits, as well as linking up advanced inverters to utility communications networks.

In New Zealand, Sunverge is partnering with Vector, an Auckland-based provider of both energy and telecommunications services — a hybrid type of utility that’s rare in the United States. This structure allows it to offer no-money-down solar-battery deals to its customers.

Vector CEO Simon Mackenzie said in a November interview that the company sees its role as a solar-storage provider in several ways. From the traditional utility perspective, “it allows us to manage the utilization and peaks on our network, to focus on how we better manage demand, and mitigate the risk longer-term,” he said.

From the perspective of making its customers happy, Sunverge’s platform supports iPhone and Android applications that allow customers to track how much solar’s being generated, how much battery storage is available, and how much the combination has saved the customer, he added.

Jon Fortune, director of regulatory and energy services for Sunverge, said at a February storage conference in Santa Clara, California that the company has about 150 units, representing 600 kilowatts of aggregated capacity, installed with Vector so far. “All the communication happens in the cloud,” he said. “You can access all the units, full command and control — we have a set of APIs that can integrate with any utility.”

Munson noted that Sunverge is working with standards groups like the SunSpec Alliance for advanced inverter communication and controls in order to future-proof its product for integration with a number of utility or grid market interfaces. It’s also a partner in the Energy Innovation Hub at Philadelphia’s Navy Yard redevelopment project, where it and a number of smart grid companies are working on distributed energy and net-zero energy concepts.

Whichever angle Sunverge’s customers end up pursuing, there’s little doubt that the combination of rooftop PV and ever-cheaper lithium-ion batteries is going to cause significant disruption in utility business models and customer relationships. “You’ve got a utility industry that has a fairly significant investment in sunken costs,” Munson said. “You’ve got a growing industry heavily invested in rooftop solar. And you’ve got to meet both of those parties’ needs.”