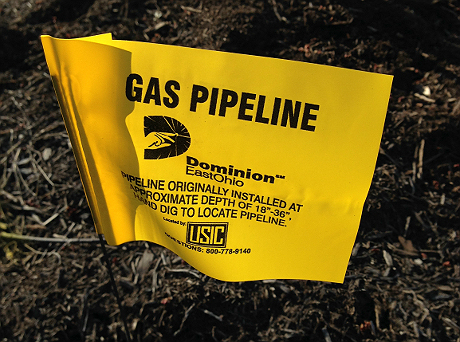 Ohio’s natural gas utilities are replacing more than 11,000 miles of the state’s aging gas pipe mains, in an effort to reduce the risks for catastrophes like last month’s gas explosion in New York City.

However, three of Ohio’s four large natural gas utilities are only about a fourth of the way into their 20- and 25-year replacement programs.

And while few would argue about the need for new pipelines, the programs have hefty price tags. By the time all four programs finish, Ohio consumers will pay approximately $6 billion.

The March 16 blast in East Harlem killed eight people, injured dozens more, and destroyed even more people’s homes — highlighting the problem of aging pipeline infrastructure throughout the United States. Although the investigation is ongoing, evidence indicates at least one leak from the 127-year-old gas main serving the two buildings that exploded.

Also this year, researchers reported finding almost 5,900 natural gas leaks beneath the streets of Washington, D.C. The team from Duke University and Boston University published their findings in the journal Environmental Science and Technology.

Like Washington, New York and other states, Ohio still has thousands of miles of cast iron or bare steel pipes. Many are more than 50 or even over 100 years old.

Over time, cast iron and bare steel pipes suffer corrosion from exposure to the environment.

Natural gas companies already had programs to deal with problem pipes. Yet the huge volume of old pipe could deteriorate faster than companies could repair and replace it.

“It’s starting to reach the end of its service life,” says John Williams, Director of Service Monitoring and Enforcement for the Public Utilities Commission of Ohio (PUCO).

Deteriorating pipe can lead to dangerous situations, including higher risks for fires and explosions.

“When you have deterioration, you could get pit holes. You could get breaks,” explains Gary Hebbeler, Duke Energy’s General Manager of Gas Operations in Kentucky and Ohio. “Then that gas is released.”

“And if that gas finds a path to the house and there’s an ignition source, that’s when you have issues,” Hebbeler says.

Duke Energy adopted its infrastructure program in 2001. At that time, the oldest cast iron pipe in its system dated back to 1883. The oldest steel pipes were just one year younger.

The 1,212 planned miles of replacements represent about 25 percent of Duke Energy’s gas pipeline mileage in Ohio.

Dominion East Ohio will also replace about 25 percent of its Ohio mileage. The company is in the sixth year of its 25-year program.

Columbia Gas is at the same point in its 25-year program. The company will replace about one-fifth of its Ohio mileage.

Vectren’s 20-year program for Dayton and west central Ohio will replace about 700 miles—roughly 13 percent of its total in Ohio.

Age is not the only factor in deciding which pipes get replaced and when. Rather, each company uses a priority system.

“We’re trying to identify the pipeline that’s in the worst condition that has the highest consequence of failure,” explains Tim McNutt, Dominion East Ohio’s Director of Planning and Asset Utilization.

Setting priorities “allows us to keep the ball in front of us,” notes Shawn Anderson, Director of Regulatory Affairs for Columbia Gas of Ohio. It and other companies reevaluate priorities periodically.

“Safety is first,” stresses Hebbeler. “Then we look at cost.”

An even level of activity keeps companies on track and can help control costs too.

“What you want to do is make sure you put out a similar number of miles each year and bid that one year in advance so you can line up your resources,” explains Hebbeler. “You try to stay as even as possible with the resources available.”

“We are currently projected to be on time and on budget” for finishing the last two years of the program, says Hebbeler.

Dominion East Ohio and Columbia Gas likewise report that their programs are on track.

Vectren is planning to speed things up. For the first five years, the company replaced about 40 miles per year.

“We’re ramping it up to 50 to 55 starting this year,” says spokesperson Chase Kelley. “It just depends on construction work and weather [and our] ability to get qualified crews to do the work.”

If that happens, Vectren’s work could finish ahead of schedule.

Finishing all four programs will take up to 19 years. But customers shouldn’t worry, says Anderson.

For starters, the order of replacements isn’t set in stone. Segments that weren’t high priorities earlier could move up the list if conditions change.

Beyond that, companies still have regular inspection and repair programs.

“We’re constantly walking every mile of our pipeline,” says Anderson. “We’re still going to repair or replace leaks that we find,” if regulations require it, he says.

“Grade two” leaks must generally be repaired within 15 months. In practice, Anderson says his company’s average is about six months.

“We’re not going to sit on our hands and wait until we’re in the eleventh hour,” he notes.

A “grade three” leak isn’t currently hazardous and is expected to stay that way. The rules don’t require repairs within any particular time frame for those leaks.

“The catch there is we require follow-up inspections,” notes Williams.

Consumers are paying for almost all of that work—primarily in the form of riders on their gas bills.

As of May 13, for example, Dominion East Ohio’s customers will pay $5.44 per month, reports company spokesperson Neil Durbin.

The riders don’t require full PUCO rate review before companies can adjust the charges. Nonetheless, the companies must eventually account for them.

Plus, the companies needed PUCO approval for the infrastructure replacement programs before going forward.

That’s where the Office of the Ohio Consumer’s Counsel (OCC) has gotten involved.

“OCC has participated in such cases with a goal of limiting what customers are asked to pay to those costs that are reasonable and prudent and needed for safe and reliable service,” says spokesperson Martin Berkowitz.

In 2012, for example, OCC joined in settlements of various issues with Columbia and Dominion East Ohio.

Among other things, OCC had argued that the infrastructure riders should not include costs for companies’ routine replacement programs.

Such savings are small in comparison to the overall costs for infrastructure replacement. Nonetheless, they’re significant.

“The leaks per miles surveyed have dropped by 37 percent since we started the program,” says Eric Hall, Director of Operations and Maintenance for Dominion East Ohio.

With fewer leaks, costs for routine repair and maintenance drop too.

Customers don’t get rebates. However, such savings reduce the amount companies would otherwise charge for riders in later years.

Fewer leaks should also reduce gas losses. Gas supply companies generally build those costs into their prices one way or another.

New pipes should resist deterioration and other problems much longer than the cast iron and bare steel they replace.

Most of the new pipe going in is plastic, says Williams. “The nice thing about plastic is it doesn’t corrode.”

“Plastic is cheaper. It’s easier to install,” he adds.

Plastic pipes can handle up to roughly 60 pounds of pressure, notes Williams. That’s up to about 12 inches in diameter, says Hebbeler.

Cathodically protected steel is the choice for pipes requiring more pressure or that will be exposed to sunlight.

Additional protection comes from anode material placed at intervals along the pipes.

Once installed, magnesium or similar material in the anode gives up electrons to either the pipes or the environment. The process lets the steel stay intact.

The infrastructure replacement program lets companies make other improvements too, such as excess flow valves.

“You could actually turn off gas flow regardless of where the meter is located,” Anderson explains. “We can control it at the curb.”

That feature can speed repairs and help protect crews if a homeowner is absent or a leak is suspected.

‘Below your feet everywhere’

When possible, utility companies work with municipalities. If cities are planning sewer, repaving or other work, coordination can save money and reduce inconvenience for everyone.

“Our goal is to get in, get out, and make it look like we were never there,” Kelley says. But, she admits, “At times that’s easier said than done.”

Safety is a goal “that we all share,” notes Berkowitz.

“People striking our lines continues to be a problem,” agrees Kelley. “In nine out of ten of those times, it could have been avoided.”

“April is National Safe Digging Month,” Williams adds. “It’s actually the law that if you’re doing any digging, you have to call 811.”

“Infrastructure is below your feet everywhere,” stresses Kelley. She urges everyone to call their gas company if they’re planning to dig and especially if they ever think they smell gas.

“You should err on the side of caution,” she says.