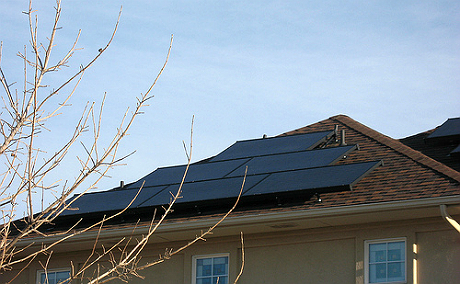 (Photo by Prizmatic via Creative Commons)

A bill likely to be voted on today in the Minnesota legislature would establish the right of certain homeowners to put solar panels atop their roofs.

Specifically, the language – which is now included as part of a large omnibus environmental bill – would ensure that right for members of homeowners associations (HOAs) who own their roofs. [UPDATE: The bill was approved by the Minnesota House on Wednesday]

That amounts to about 20 percent of members of homeowners associations statewide, or an estimated 1,500 to 2,000 households, according to state Rep. Will Morgan, who introduced the bill. The rest live in multi-family units, in which they share ownership of the structure’s exterior.

Fresh Energy, where Midwest Energy News is based, has advocated on behalf of the legislation.

Homeowners associations and municipalities across the country have attempted to restrict the installation of solar panels, leading to conflict, litigation and legislation in many communities and states.

Although the Missouri legislation appears unlikely to pass during this session, litigation continues in several communities in the state, including the St. Louis suburb of Clarkson Valley, where Frances and James Babb installed a large solar array in 2012.

In Minnesota, Morgan said solar energy is gaining traction, especially since the state revised its renewable energy standard last year to include more ambitious solar requirements for both utility-scale and rooftop solar. He believes that now is the time to eliminate any obstacles that could impede meeting that standard.

“We’re seeing an explosion of the solar industry,” he said. “And we’re seeing the cost of solar coming down. We desire to see as many people as possible have access to this. If you live on a farm, you can put a windmill on your land. Solar represents a chance for suburbanites to do something about greenhouse gas emissions. My motive is to make this available to as many people as possible in a reasonable manner.”

Morgan said he’s discussed the issue with an association representing homeowners associations nationwide. The association opposes this legislation – as they did a law passed in Minnesota in 2005 to allow members to put up flagpoles on their property, Morgan said.

Fundamental to their philosophy, Morgan said, is “to be able to restrict things. They won’t support this.”

Establishing some parameters around the installation of solar panels is “totally legitimate,” said Lynn Hinkle, policy director for the Minnesota Solar Energy Industries Association. “But we want to make sure that HOAs are not saying categorically that solar is not acceptable.”

There have been reports of resistance to solar installation, he said. In Woodbury, a suburb of St. Paul, “a number of people have been denied the opportunity to install solar. A lot of HOAs are trying rightfully to protect the integrity of everybody’s investment.”

However, a 2011 study done by the Lawrence Berkeley National Lab in California concluded that solar installations generally increase property values on a dollar-for-dollar basis.

Morgan said he wants to pass legislation protecting solar rights before conflict over the issue grows.

“I think we’re getting out in front of the HOAs. We want to get these regulations out before the industry really heats up. We don’t want the lawsuits.”

‘The legal bills are very expensive’

One of those lawsuits, now two years in the making, involves a city councilman in Rochester, Minnesota.

Michael Wojcik and his wife, Lisa, bought a property about a decade ago and began designing a house that would be situated and laid out to maximize solar-energy production. They say they carefully read over their homeowners association covenants and found no mention of solar – although the rules apparently do require the association’s approval for any modifications to a home’s exterior.

In 2012, the Wojciks installed the panels, according to their original plans, without having received permission from the homeowners association, according to its current vice president, Victoria Cliby. A few months later, the association filed suit.

“This is so not about solar,” said Cliby, who is building a home in another part of town that she said is more open-minded about architectural style. She said she considers a 2010 letter from the developer’s architectural board to have been a decision, and that the Wojciks “disregarded that decision.”

Wojcik said the opposition was surprising because, according to him, the adjoining neighbors on both sides had no objections to the panels, nor did the occupants of the one house with a fairly clear view of the installation.

Wojcik said the 6.24-kilowatt installation has been producing “substantially more power than our home requires. I will have a negative energy charge for the rest of my life – not counting legal fees.”

“I don’t know what they are suing us for,” Wojcik said. “I assume they want us to take down the panels. All we know is the legal bills are very expensive.”