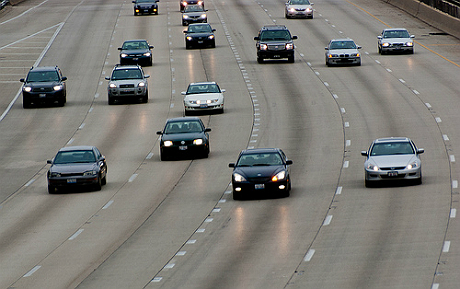 With gasoline taxes failing to keep up with the costs of road maintenance, some see a mileage tax as an attractive alternative.

However, the concept still faces a wide range of opposition — from truck drivers to clean energy advocates.

A vehicle miles traveled or VMT tax, as the concept is often known, has been considered by several states. The idea is to provide a source of road funding that avoids deliberately raising prices at the pump — a move that in most parts of the country amounts to political suicide.

Oregon has a pilot VMT program slated to start in July 2015, and VMT legislation has been proposed or studies have been done and small pilot projects undertaken in other states including Indiana, Illinois, Ohio and Iowa. In December, U.S. Rep. Earl Blumenauer (D-OR) introduced federal legislation (HR 3638) which would institute a Road Usage Fee Pilot Program involving studies of mileage-based fee systems.

Business groups and leaders including the Indiana Chamber of Commerce have supported the concept of VMT. A 2011 study by the RAND Corporation concluded that especially given increased efficiency of vehicles, a VMT could provide a “more stable revenue stream” and significantly more funding for highway upkeep. The study found that the federal fuel tax would see revenue growth from $36 billion to just $39 billion between 2015 and 2030, while a VMT tax instituted in 2015 could yield $47 billion by 2030.

But many clean energy advocates, consumer watchdogs and others oppose the idea, in part because it would undercut an incentive for driving electric, hybrid or generally more efficient vehicles — saving money on gas.

VMT opponents have also argued it would be unfair to rural residents, who end up driving more; and that it would be prohibitively complicated and costly to institute. Plus a VMT tax would most likely entail tracking mileage with a GPS device installed in every vehicle, which could raise privacy concerns.

Political inertia in the House of Representatives and privacy and pragmatic concerns raised by VMT programs mean that federal legislation is probably unlikely any time soon. The website govtrack.us lists Blumenauer’s bill as having a “1%” chance of getting past committee and a “0% chance of being enacted.” And no state besides Oregon has actually instituted a significant VMT program or has one on the near horizon.

Policy experts concerned about VMT taxes say it is important to raise awareness of the pitfalls to make sure VMTs aren’t adopted by elected officials or civic leaders who don’t understand the potential consequences.

Howard Learner, executive director of the Environmental Law & Policy Center, said he can see how a VMT tax might seem appealing, theoretically spreading the burden of road repairs and encouraging people to drive less.

“It’s one of those things that sounds good, and can have good packaging,” said Learner. “But there are unintended consequences. It’s an interesting new idea, and we believe in exploring new ideas. But this one wouldn’t work well.”

Learner added that VMTs on the state level would likely let out-of-state drivers — potentially including truckers — off the hook, as their vehicles likely wouldn’t have the necessary tracking device for a VMT.

“It’s difficult and costly to administer and could have serious unintended consequences in dealing with (Midwestern) states that are the crossroads of America,” Learner said.

Would a VMT hurt EVs?

Ted Lowe is head of the Fox Valley Electric Auto Association, a long-standing group of electric car owners and enthusiasts in Illinois. He is leery of VMT taxes for a number of reasons.

“Everything you do that creates incentives for positive change is a good thing, and taking away those incentives is a negative thing,” he said.

But overall he doesn’t think the measure would put a serious damper on electric vehicle sales.

“For the people I know who have electric vehicles, I don’t think it would really be a big deal,” he said. “We’re coming at it as a multi-benefit thing” – not just cost savings. “If electric vehicles become polluting and inefficient, then we’ll stop buying them.”

Lowe posited that the debate over gas versus VMT taxes raises larger questions about how society manages transportation and how people carry their “fair share” of the burden.

“Do some anti-environment types resent cleaner drivers just because they are pro-environment or that ‘they are cleverly working the system to be more free’?” he asked. “Do any of these proposals or pilot projects give ‘environmental credits’ to cleaner vehicles to reward people leading the world toward healthier futures?”

At first glance it might seem like trucking companies or truck owner-operators — with their high fuel consumption — would benefit from VMT. But Darin Roth, director of highway operations for the American Trucking Association, said a VMT would be so complicated that most truckers prefer a higher gas tax.

“We’re not blanket opposed to the concept” of VMT, he said. “But the form it is likely to take, we have a lot of concerns about.”

He said truckers have been “begging” Congress to raise the gas tax to pay for road repairs – since bad roads cause havoc for truckers. Truckers don’t mind paying more in taxes for roads, he said, but they foresee VMT causing unnecessary headaches and expense – with too much of the revenue generated going back to administer the program.

And if individual states adopted their own VMT programs, as opposed to a federal program, it could mean huge hassles for cross-country truckers – not to mention the state agencies tasked with collecting from them.

“What if you have different layers of government, each adopting their own regulations,” he said. “We obviously don’t want to have different technologies going through different states. It’s bad enough that you need multiple transponders for different toll roads. This could be an absolute nightmare.”

How would it work?

In Oregon’s program starting next year, 5,000 volunteer motorists with cars and light trucks will pay 1.5 cents per mile and get a refund of the gas taxes they’ve paid.

Oregon did pilot studies in 2007 in the Portland area and then in 2012-2013. Over the past few years researchers including at the Congressional Budget Office and the University of Iowa’s Public Policy Center have studied the potential of VMTs.

The University of Iowa study outfitted more than 2,000 vehicles with equipment to track miles driven, for a two-year field test. A release from the center noted that within the first year and a half of field testing, the tracking devices were made “reliable, user-friendly, and secure.” The study found that while only a fifth of the volunteer drivers involved supported the idea of a VMT tax when the study began, a strong majority were open to the idea by the conclusion of the test.

Meanwhile legislation passed in Indiana last summer calls for a study by an independent contractor looking at alternatives to increasing gas taxes. VMT taxes will be included in that study, which the Indiana Department of Transportation has two years to conclude, according to Cameron Carter, vice president of economic development and federal affairs for the Indiana Chamber of Commerce.

“It is the Indiana Chamber’s position that the ‘user pays’ model is a viable one going forward and that any vehicle using the roadways needs to pay its fair share,” Carter said.

VMTs could be designed different ways to more fairly and accurately charge drivers for their portion of road wear and tear. For example, taxes could be calculated by both distance and weight of vehicle; trucks can do this with an on-board scale. And incentives for electric vehicles could be built into the program.

But anything relying on distance would likely require either some form of self-reporting or GPS systems on cars. Despite the ultimately positive results of the University of Iowa study, this is bound to be a hard sell for many Americans.

Governments would have to somehow make sure all cars have the devices. And potential for electronic errors could be high. Setting up, administering and enforcing the programs would be inherently complicated, and adding more factors to tax rate calculations – like incentives for efficient or electric vehicles — would increase the cost and difficulty of the program even more.

That’s where many clean energy advocates, truckers and others agree that Congress needs to raise the gas tax.

“The current tax system works well” though the gas tax needs to be raised, said Learner, who published a series of commentaries in local newspapers opposing the idea of VMT. “It’s a de facto pollution tax and it’s easy to administer. A VMT is delinked from pollution. There’s a saying – if the wheel ain’t broke, don’t fix it.”

The Environmental Law & Policy Center is a member of RE-AMP, which also publishes Midwest Energy News.