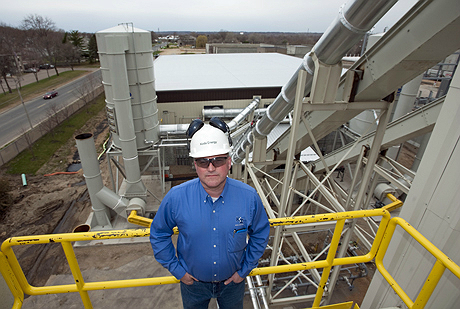 Stacy A. Cook, Vice President and General Manager of Koda Energy, at the combined heat and power biomass plant in Shakopee, Minnesota. (Photo by Craig Lassig for Midwest Energy News)

When airborne dust ignited a silo explosion last spring at a biomass cogeneration plant in Minnesota, it was a major setback for the pioneering energy facility.

But the blast’s impact on Koda Energy’s bottom line was a blip compared to the prolonged strain of operating in an energy market that’s been turned upside down by fracking and cheap natural gas.

When a tribal government announced a partnership in 2006 to build the $60 million plant with one of the world’s largest malting companies, Rahr Malting Co., they were coming off a winter when spot prices for natural gas topped $13 per million Btu.

By the time the power plant began operating in May 2009, natural gas prices had plunged below $4. A few years later, in the spring of 2012, spot prices would briefly dip below $2.

The price plunge has prolonged the project’s payback time, but its operator says they’ve stayed viable and improved the outlook by keeping a constant focus on cutting costs and upgrading efficiency.

“We may have had some months where it was showing a lot of red, but you could see through the performance and efficiency gains in the plant it was worth sticking with it,” said Stacy Cook, Koda Energy’s vice president and general manager.

How the system works

Combined-heat-and-power plants such as Koda Energy take the waste heat that’s created during electricity generation and apply it to another use, usually an industrial process or district heating system.

In the case of Koda Energy, Rahr Malting uses that thermal energy to heat massive industrial kilns that dry wet barley into a key ingredient in beer that’s eventually sold to MillerCoors, Anheuser-Busch, and scores of craft and home brewers.

Koda’s plant is adjacent to Rahr Malting’s plant in Shakopee, Minnesota. When electricity is generated close enough to a heat customer, capturing and using that waste heat can eliminate the need for a separate, heat-only facility and fuel source.

Cogeneration, as it’s sometimes called, costs more to build compared to a conventional power plant, and it derives its economic benefits in large part from the fuel savings, which accumulate more slowly when prices are low.

Cook said the tribe backed the project in part for environmental stewardship reasons, but also because the project looked to have very favorable economics at the time.

Not only were natural gas prices much higher, the housing bubble had yet to burst, which meant there was a glut of cheap scrap wood available from homebuilders and cabinetry shops available as a fuel source.

The housing downturn and increased competition from ethanol plants and other biomass facilities meant Koda Energy’s biomass fuel costs two years into operations were roughly double than what they would have been at the start of construction.

Carbon credits were trading for over $4 a metric ton during the planning stage, but the market for those credits had all but disappeared by the time Koda came online and have only recently begun to regain some value, Cook said.

The price Rahr Malting pays Koda Energy for heat is loosely indexed with the price of natural gas, so not only are fuel costs higher but revenue has been significantly lower than what was initially projected.

“There were some frank discussions,” Cook said.

‘Trending in a positive direction’

But 2012 proved to be a turning point for the plant, Cook said. The price of natural gas bottomed out and began to slowly climb again. Meanwhile, it began to feel the benefits of efficiency and other investments aimed at keeping the plant competitive.

The turbine room at the combined heat and power biomass plant only takes three operators per shift to run. Photo by Craig Lassig for Midwest Energy News. (Click to enlarge)

The company built a facility to process urban tree trimming waste and struck a deal with the Minneapolis park system to take part of its growing forestry waste as it responds to invasive tree pests. (Besides dried wood, the plant also burns Rahr Malting byproducts and oat hulls from General Mills that are leftover from making the flour used to make its Cheerios and Lucky Charms cereals.)

The combined-heat-and-power plant’s efficiency was around 50 percent the year it opened. Several years of steady investments have helped improve that efficiency to nearly 60 percent today, Cook said.

The revenue from Koda’s electricity sales has also helped. It has a ten-year contract to sell 12 megawatts of baseload power to Xcel Energy, and Rahr buys the remaining generation, between 7 and 8 megawatts on average, at the same rate it would otherwise pay Xcel for power.

“It stabilizes our revenue stream somewhat,” Cook said. “Our thermal revenue will fluctuate with the price of natural gas. Our electrical revenue remains fairly constant.”

Jessica Lubetsky, an officer with the Pew Clean Energy Program, said Koda Energy’s case is a bit unique because it uses exclusively biomass as a fuel source, but even fossil fuel-powered cogeneration plants are facing similar pressures.

Combined-heat-and-power facilities are still a valuable tool for boosting efficiency, improving reliability and saving money, but the payback times on investments have been stretched out because of low gas prices, Lubetsky said.

That’s why the technology is in need of more policy support at the federal level, she said. Pew is advocating for changes that will help cogeneration projects qualify for existing clean energy tax credits and help eventually double industrial energy efficiency by 2030.

While the economics aren’t as attractive as they were seven or eight years ago, combined heat and power “still makes very good sense,” Cook said.

“We’ll continue to improve the efficiency. We’ll continue to control our fuel supply,” he said. “Even with the lowest natural gas prices ever (indexed for inflation), we were still trending in a positive direction.”