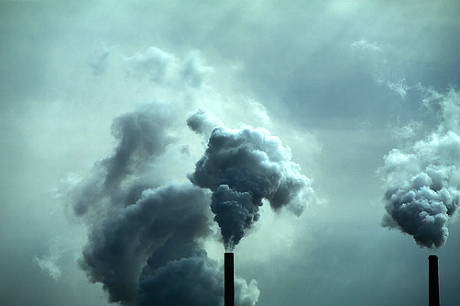 (Photo by Rich via Creative Commons)

Weeks before the U.S. Environmental Protection Agency is expected to issue first-ever limits on carbon emissions from existing power plants, opponents in some Midwestern state legislatures and governors’ mansions are attempting to put up roadblocks.

The impending federal rules could require massive changes in the nation’s electrical system, including the closure of some coal-fired plants.

Last week, for example, Kansas Gov. Sam Brownback signed a bill that asserts that Kansas will make its own decisions about emissions from coal-fired plants. The bill-signing ceremony took place at a western Kansas coal plant.

Specifically, the bill calls for Kansas regulators to establish an emissions standard for each plant, depending on the cost of new controls. It also would calculate statewide carbon emissions by averaging all sources of power – wind farms along with fossil fuel-fired plants.

“What we are saying is, let us, the state of Kansas, handle this,” Brownback said at the event.

In Missouri, several bills are pending. A couple of them have passed at least one chamber.

“It’s all about politics,” said John Hickey, a Sierra Club lobbyist in Missouri. “Legislators are trying to pressure the EPA, the governor, the DNR and the Congressional delegation.”

‘You send a message’

President Barack Obama instructed the EPA to issue draft rules in June. They are to be finalized in June of 2015.

Then, state agencies — such as the Department of Natural Resources in Missouri — will be charged with developing plans to meet the federal targets.

One of the Missouri bills taking aim at the impending EPA standards is SCR 40. That resolution, in essence, states that the EPA “should let (Missouri) set lower standards, and take a longer time to meet them,” said John Hickey, a Sierra Club lobbyist in Missouri.

A resolution is really just an expression of opinion, and doesn’t have the force of law. And yet to Hickey, it’s significant in the same way that aiming a gun is – even if you don’t pull the trigger.

“You pull the gun out; you send a message,” he said. “They have so many ways to punish the DNR. It’s just one tool to say, ‘We’re going to mess with you – with your budget, with your appointments.’”

Rebecca Stanfield of the Natural Resources Defense Council (NRDC) sees in these measures the palm prints of the American Legislative Exchange Council – and especially its coal-industry members.

“These are tactics the coal industry is using to try to intimidate the EPA and to build opposition to standards on carbon pollution,” she said. “I know of no state in the Midwest where there isn’t an effort by the Koch brothers and the coal industry to have a statement come out saying, ‘This is bad.’”

When asked about the role and perspective of Peabody Energy, a St. Louis-based coal company, a spokesman issued the following statement:

“Peabody Energy supports technology advancement and continuous emissions improvement, while opposing proposed rules that would punish electricity consumers and act outside of the bounds of the law.”

Stanfield is confident that the campaign won’t get far.

“The most they can do is tie the hands of the state,” she said. “Then they’ll be faced with the federal plan. At the end of the day, the rules still have to be met.”

And states will fare best, she believes, if they embrace the standards and try to implement them through their state environmental regulatory agencies.

“These are people with long histories working in our states. They know the resource mix. It makes the most sense for those people to develop the state’s plan.”

Bills in other states stalling

Sabre-rattling targeted at the EPA and Congress has failed to get anywhere in a couple of states. Resolutions have been introduced in both legislative chambers in Illinois, but have gone nowhere.

In Iowa, state Rep. Ralph Watts introduced a resolution into the House of Representatives in March that stated that “it is in the best interests of electricity consumers in Iowa to continue to benefit from reliable, affordable electricity generated by coal-based electricity generating plants.”

Iowa state Rep. Chuck Isenhart, who describes Watts as “a climate denier,” interpreted HR 118 as “very one-sided” with a heavy emphasis “on the merits of continuing to burn coal.”

Isenhart and fellow Rep. Art Staed introduced several amendments that emphasized the merits of more wind and solar power, and of cooperating with the EPA in carrying out the upcoming standards.

Their aim was to stop the resolution from moving through the legislature. It appears they succeeded in that.

Rep. Watts and his supporters “wanted to send this to Congress and the EPA, that the Iowa House wants to resist the rules of the EPA, and to continue to use cheap coal,” Staed said. “The rest of us think it doesn’t represent the people of Iowa, or the Iowa House.”

Had it passed, Staed said, “You’d see it printed in every magazine that is opposed (to controls on carbon emissions), and that would give it more credence. That’s the wrong message. Iowa is going to continue to use more wind and solar, and reduce its use of fossil fuels.”

Rep. Watts, who spent his career in the electricity and gas industries, said he considers it “quite possible” that the coming EPA limits on carbon dioxide emissions will “effectively stop coal-fired generation.“ And the specter of a climate change, he said, is “not an issue that warrants us shutting down coal fired plants.”

His aim in pursuing a resolution, Watts said, was to persuade Congress to stop the EPA from issuing the regulations, or to override them with a new law.

Hickey, of the Sierra Club, shares the concern that even strictly symbolic measures can pack some punch.

“Look at the other rules that have been challenged and delayed,” he said. “Look at coal-ash waste. They want to delay, delay delay.”

The EPA turned its sights on coal ash after the largest-ever spill of coal ash waste in the U.S. In December 2008, an estimated 50,000 to 82,000 tons of coal ash, along with 27 million gallons of water, poured from a storage pond near Kingston, Tennessee and into a couple of rivers. Coal ash contains toxic heavy metals such as mercury, lead and cadmium.

In 2009, then-administrator of the EPA, Lisa Jackson, promised that the agency would write rules for the disposal of coal ash, the byproduct of coal combustion in power plants. In 2010, the agency conducted seven public hearings and collected nearly half a million comments.

Regulations have not been forthcoming.

Hickey considers the current pushback against EPA rules on carbon emissions to be “same song, second verse. They’ve been able to delay so many other regulations; why not tie up this one too? The fossil-fuel industry has found that if they try to delay EPA action, they can have success.”

The U.S. Supreme Court has ruled that the EPA has the prerogative to regulate carbon dioxide emissions, and ultimately, that law of the land must be followed, said David Weiskopf, a sustainable energy fellow with NRDC in Chicago.

If a state legislature requires its environmental protection agency to “jump through a lot of hoops, it will take more resources,” he said. “It doesn’t do anything but waste taxpayer money.”

States will be best served, he said, by fulfilling the mandate “in the lowest-cost way, and by encouraging local industry.”

The Sierra Club and the NRDC are members of RE-AMP, which also publishes Midwest Energy News.