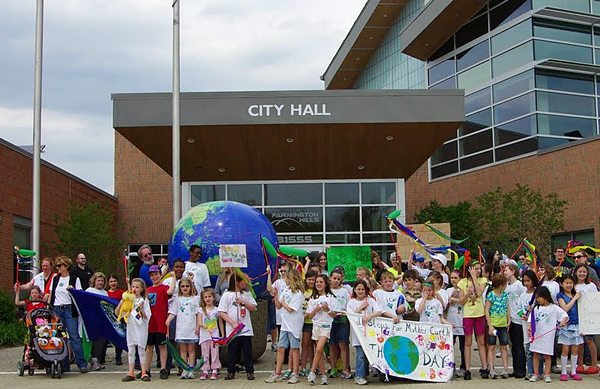 Five million dollars is a lot of money for a place like Farmington Hills, Michigan.

That’s what Georgetown University is offering for the small or mid-size city or town that wins its Energy Prize, launched last month and accepting applications through June 30.

Major cities like New York, Chicago and San Francisco have seen a lot of attention for their major investments in energy efficiency and conservation. Among other things, they are working together through the City Energy Project and competing for top state rankings on efficiency.

Smaller cities and counties often don’t have the resources to undertake sweeping and headline-grabbing projects. But these entities have ample opportunities to implement energy efficiency projects that can yield concrete savings and environmental benefits, educate residents and serve as role models, even for bigger cities.

The Georgetown prize is open to entities with between 5,000 and 250,000 residents, which organizers say includes almost 9,000 communities and two-thirds of the U.S. population.

“Small and midsize cities and towns are more nimble in their ability to reach out to their residents,” said Nate Geinzer, assistant to the city manager of Farmington Hills, which filed a letter of intent to compete for the Georgetown prize. “The scale is more manageable.

“One of the things that will be key to this competition will be the community’s ability to capitalize on its sense of community and pride. Can you do this as successfully in a city of hundreds of thousands or millions?”

Only one community will receive the $5 million, though a second and third prize may be added in. There’s stiff competition, with more than 50 letters of intent filed in the months after President Barack Obama spoke about climate change at Georgetown last June. Ultimately more than 100 communities will be involved in the competition, according to Prize executive director Dr. Francis Slakey.

Finalists for the prize will be selected this year, then over the next two years their energy savings will be measured. The winning project must show energy savings, be sustainable beyond the competition and be replicable in other communities.

The projects will also be judged – by a panel yet to be selected — on the innovative nature of the approach and the level of community outreach.

“Every community who competes will win,” said Slakey, noting that municipal leaders have told him the prize has already helped them bring stakeholders to the table and set projects in motion.

“Over the next three years, we’ll support these communities’ efforts to engage their residents, while highlighting their successes and helping a broad national audience understand the implications of their energy choices.”

Participants in the competition will get a range of benefits beyond potential prize money, including individualized technical assistance, communications support, interactive workshops and webinars, templates and case studies from other communities. The competition should also lead to opportunities to apply for seed grants and other outside funding, and to connect with federal policymakers.

Letters of intent to enter the competition came largely from the east and west coasts, but a handful of Midwestern communities have already thrown their hats in the ring. Farmington Hills is joined by Holland and Houghton County in Michigan. Madison and River Falls, Wisconsin sent letters; as did Oberlin and Athens counties in Ohio; Monroe County, Indiana and Dubuque, Iowa.

“Even though we are seeing these great ideas, and there are many initiatives and incentives available from governments, nonprofits and private corporations, the adoption rate for energy efficiency programs such as home retrofits remains very low,” said Slakey. “This is a ‘stuck’ problem and we need serious, breakthrough thinking to improve America’s energy standing for the future.”

If it plays in Farmington Hills…

Farmington Hills is an upscale suburb of Detroit with 80,000 residents; a hub for business and research in Michigan’s most prosperous county.

But still, like many Midwestern municipalities, it is struggling to overcome the economic, infrastructure and social consequences of a brutally cold and snowy winter, not to mention the lingering effects of the economic crisis. That has made it hard to position energy efficiency as a priority.

“There are too many needs vying for limited resources, especially as we climb slowly out of the hole we were left in after the Great Recession,” Geinzer said. “Not to mention during these times of reduced local revenue, state and federal support has also declined. There is more need for assistance than we can do on our own.”

Farmington Hills has already shown a commitment to sustainability and energy conservation, including overhauling City Hall into a LEED gold certified building. Public interest in sustainability is increasing too, Geinzer said, as evidenced by growing attendance at Earth Day events.

Nonetheless, Geinzer said, “Energy and environmental sustainability is not as institutionalized as you might see in other southeast Michigan communities.” But he looks on the bright side: “We feel this gives the greater Farmington community a leg up, we have lots of room for improvement.”

Like many municipalities, Farmington Hills made substantial energy improvements with funding from the Energy Efficiency Conservation Block Grant (EECBG) program, which has expired. Many mayors are pleading with Congress to reinstate it.

Geinzer said the Georgetown prize could help Farmington Hills pick up where it left off after the EECBG funding ran out, including by improving energy use in public buildings and funding efficiency overhauls of homes.

“Since that program (EECBG) ended, we have focused our energy on public education and outreach such as our Earth Day event,” Geinzer said. “Winning the prize would allow us to directly support improvements in our community’s homes, impacting thousands of our residents, especially those who need it most…The prize would open many doors.”

Geinzer said Farmington Hills officials are especially eager to work with local businesses to reduce energy use, and he hopes the competition fosters broader cooperation from the private sector.

“I hope the nation’s corporate community recognizes the opportunity and impact they can have by supporting this competition and energy and environmental sustainability in general,” he said. “Energy efficiency is a win, win, win — a win for people, a win for the economy, and a win for the environment.”