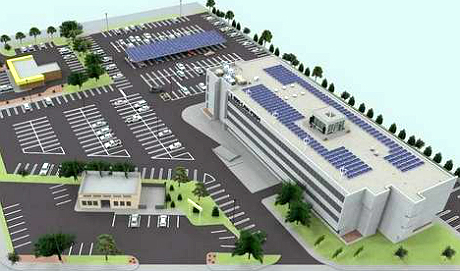 A rendering of planned improvements to the 1-800-Law-Firm building in Southfield, Michigan. (Courtesy photo)

After two years of buildup, a unique public-private partnership to facilitate energy efficiency in Michigan is starting to show some major results — with millions of dollars worth of projects now in the works.

One of those projects, 1-800-Law-Firm, is a national company that represents plaintiffs on everything from tax issues, bankruptcy and divorce to medical malpractice and nursing home abuse. Until recently it was housed in a nondescript four-story, 100,000-square-foot headquarters in the Detroit suburb of Southfield.

Soon the headquarters will be a model of renewable energy and energy efficiency, complete with solar panels and micro-wind turbines on the rooftop; solar-covered carports and electric vehicle charging stations; indoor and outdoor efficient LED lights and an ecologically friendly rooftop solarium. It will also feature energy optimization that reduces power fluctuations and improves the performance of computers and other electronics used in the building.

Half the cost of the $1 million overhaul is being covered under Michigan’s PACE (Property Assessed Clean Energy) program, administered by Lean & Green Michigan. The law firm headquarters is the first project for Lean & Green Michigan and the first in the state (outside of a separate program in Ann Arbor) that is taking advantage of the PACE program, made possible by a 2010 state law.

At least 31 states and Washington D.C. have laws on the books that allow individual counties or municipalities to institute PACE programs, wherein commercial and industrial entities can get long-term financing for energy improvements through a special assessment on their property taxes.

Lean & Green launched in 2012 when PACE was still being virtually ignored in Michigan, except for the program in Ann Arbor funded by municipal bonds. Now PACE has been instituted by seven Michigan counties and two cities (Southfield and Rochester Hills), representing more than a third of Michigan’s population. On April 30, the seven-member board of Grand Traverse County voted to unanimously adopt PACE.

Projects in the pipeline

The 1-800-Law-Firm building is scheduled for completion in July, according to Andrew Levin, whose firm Levin Energy Partners manages Lean & Green. The renewable energy and efficiency overhauls are being done by Srinergy, a Michigan company that provides turnkey solar installations.

Governments pay nothing for Lean & Green’s assistance, which includes educating officials and building owners about PACE and how it works, helping them find legal assistance, auditors, lenders and contractors to carry out projects. Lean & Green gets revenue when individual projects are undertaken, in an arrangement Levin compares to renting a stall at a farmer’s market. (See Lean & Green’s 90-second video about PACE here.)

While it has been a slow learning curve in Michigan so far, Levin said things are about to take off.

He said $20 million worth of projects are in the works. While he can’t discuss specific details, Levin said one project is very close to being announced and the others are in tangible stages. The imminent project is “not as flashy” as the law firm building – “just all about efficiency,” Levin said – but it should draw attention and interest nonetheless.

“We have a really broad array of buildings – in that pipeline are multi-family projects like apartment complexes, large factories, more office buildings, large shopping malls, it really runs the gamut of commercial and industrial properties,” Levin said.

Once the 1-800-Law-Firm rehab is done, Levin expects a rise in other businesses tapping the program (the Michigan law does not cover individual houses.) The law firm is highly visible, at the convergence of two highways.

It also doesn’t hurt that Levin is moving Lean & Green’s own offices into the building.

“It comes down to education, education and education,” Levin said. “It’s a brand new thing, it’s different from what happened in the past. It sets out to solve the problem that regular financing doesn’t work for most energy efficiency and renewable energy projects, because the payback might be 10 to 12 years, and regular commercial financing doesn’t go like that.

“It’s hard to explain…but once you explain it, it’s so great for everybody involved that people get quite enthusiastic about it.”

“When I went to the city council meetings, they talked about this being a flagship project for the city of Southfield,” added Prasad Gullapalli, president of Srinergy. “Hopefully we’ll be closing more and more deals by leading from example here.”

Once a PACE program is in place, Lean & Green acts as a “matchmaker” between businesses seeking to use PACE, contractors who work on PACE projects and banks or other investors that put up the funds.

While typically the Lean & Green marketplace would have featured a building owner choosing between Srinergy and other similar companies, the law firm deal was “more of a collaborative effort,” in Gullapalli’s words. “Rather than leveraging the marketplace, since it’s the first one we’re applying the lessons learned in the process to do better.”

Levin explains that using PACE funding can be beneficial for everyone involved. Lenders can have confidence in funding projects through PACE, since it is considered more likely they will get their money back through the property tax assessments, which stay attached to the property even if the owner sells. The law says the energy savings achieved from the projects must be at least equal to or greater than the cost of the special assessment, so it should be a nearly risk-free arrangement. Meanwhile contractors that install solar, micro-wind, lighting and other energy efficiency products get more customers.

“If a given property owner is looking to do an HVAC project, they can get competitive bids from multiple HVAC contractors,” Levin said. “On another level, HVAC companies all have great projects they have pitched and the property owner said, ‘Gee I would love to do this but how am I going to pay for it?’ Now they have a way.”

Other states including Connecticut and California have implemented PACE programs much more aggressively than Michigan, Levin said, but he thinks the Lean & Green model makes Michigan unique.

“What Michigan really stands for nationally in the PACE world is whether you can create a big statewide efficient market for PACE,” he said. “We’re really an open market model…the idea of one big efficient market that’s open to lenders, contractors, property owners, is really what Michigan is all about.”

Getting into Grand Traverse

Grand Traverse County planning and development director John Sych said PACE will allow businesses to do projects they wouldn’t have been able to otherwise. And he said Lean & Green has been “essential” to making it happen.

“Otherwise we wouldn’t have had the capacity to really move forward,” he said. “They made it seamless for the county, providing legal documents, helping us understand what PACE is and isn’t.”

While no projects have been proposed yet, he thinks an environmental services company that owns a large industrial building and another large building in downtown Traverse City may be the first participants. (Grand Traverse County has about 90,000 residents).

“I don’t expect people to be beating down our doors, it takes a while to build community awareness,” he said. “But once we get a few projects underway that will help things pick up. Businesses in this area are very cognizant of energy costs.”

Soon after the idea was proposed to the board in the winter, they held a forum about PACE for interested businesses and other government representatives. Sych said representatives of at least one nearby county attended, and he expects there will be more interest in PACE in the area.