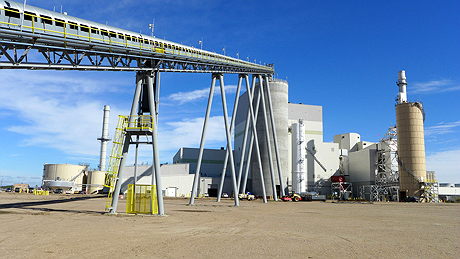 In early 2012 the Spiritwood power station in rural North Dakota was completed, and then the $437 million project was immediately shut down.

The 99 MW plant was designed to burn lignite coal from the region with state-of-the-art emission controls, and a combined heat and power system wherein the steam generated from the process would be used to power nearby ethanol and malt plants – making it essentially twice as efficient as a typical coal plant.

But low power prices, weak electricity demand and other lingering effects of the economic crisis, plus changes in ethanol subsidies and corn prices that killed the ethanol plant meant to buy the steam, meant Spiritwood could not operate cost-effectively. And Great River Energy, the wholesale electrical cooperative developing the project, decided to put it on hold.

Skeptics and critics described it as a failure that showed the pitfalls of coal — even plants billed as clean and efficient. But the developers said they were just biding their time waiting out an unfortunate combination of forces.

Now Spiritwood is scheduled to begin generating electricity by the fall, and will sell its steam to a nearby Cargill malt plant, as originally planned, and to a new corn ethanol plant being built by a wholly-owned subsidiary of Great River Energy.

Great River Energy vice president for generation Rick Lancaster said the model will now be financially viable, providing competitive energy to cooperative members and steam that will allow the ethanol and malt plants to run without burning natural gas.

“So you’re not buying a fuel to make a fuel,” said Greg Ridderbusch, president of Midwest AgEnergy Group, owner of the new biofuels refinery, which will be able to produce up to 65 million gallons of ethanol a year.

It already runs an ethanol plant with combined heat and power, a system that was “bolted on” to Great River’s existing Coal Creek coal-fired plant.

The Dakota Spirit AgEnergy refinery under construction will be more advanced and more efficient than that plant, said Ridderbusch. Midwest AgEnergy was a partner, though not the lead, in the previously planned ethanol plant that was taken off the table a few years ago.

“You just don’t have a fence-line in combined heat and power,” said Lancaster. “There’s an integration in the two sides, you need to work closely together.”

“Like if you drive a car and someone else owns your engine, that’s kind of what it’s like in an industrial combined heat and power relationship,” added Ridderbusch. “They are trusting that you are running the plant in a way that also serves your purposes.”

Since federal ethanol subsidies have ended, combined heat and power is one of the ways ethanol producers can try to compete with conventional gasoline.

“Biofuels plants with CHP have an economic advantage,” Ridderbusch said. “And on the consumer side, the (revenue from the) purchase of thermal energy for biofuels pools back through the cooperative’s rates — it offsets costs that we would otherwise have electric consumers pay. There’s a little bit of winning there for everyone involved.”

The use of waste steam will mean the ethanol plant can meet the Environmental Protection Agency Renewable Fuels Standard 2 (RFS2) for reducing carbon emissions by 20 percent beyond conventional motor fuels. Ridderbusch said it will be the only ethanol plant in the country with that certification.

The first ethanol plant to be built in the U.S. since 2007, it could also be a boon for local farmers. Starting with this fall’s harvest the plant will provide a market for North Dakota corn, the great majority of which is typically exported out of state. And the plant will sell distillers grains, a byproduct of ethanol production, as livestock feed.

“I’m married to a farmer as well as being town development director,” said Connie Ova, CEO of the Jamestown/Stutsman Development Corporation, in the town of about 60,000 near Spiritwood. “We’re very excited about the fact we’ll be able to deliver our corn, that we’ll actually have a market for our corn a lot closer than It has been in the past.”

In fact, corn has been piling up at grain elevators because the region’s major railway, BNSF, has been devoting so many of its trains to carry oil from the Bakken Shale.

“We just have to help the farmers get that corn out of their grain bins,” said Ova. “If we had an ethanol plant up and running now, it would be another place to haul.”

The steam from Spiritwood will be used to essentially cook the corn to make malt at the Dakota Spirit plant and the Cargill plant. After recondensing, the water will be returned to Spiritwood for the coal-fired generation process, greatly reducing the plant’s water use.

The lignite coal to be burned at Spiritwood is a wetter, heavier and “dirtier” type than the harder coal used by most coal plants. In Eastern Europe, the widespread burning of lignite for power means increased emissions and the destruction of towns for massive strip mines. But at Spiritwood, emissions will be relatively low since the coal will be dried and mercury and sulfur removed before burning.

Cellulosic ethanol on the horizon?

For the foreseeable future the Dakota Spirit refinery will produce only corn ethanol. But the project developers have also studied the possibility of making cellulosic ethanol, extracting biofuel from the fibers of plants. There has been much research done into various cellulosic biofuels, but nothing has been commercially developed that would work in the plant.

Ridderbusch thinks that could change in the future. If so, the plant would draw from a wider range of biofuel feedstocks, including the husks and stalks of corn that are now left on the fields. Cellulosic ethanol produces another byproduct, lignin, which could be burned in the power plant. The coal plant was designed specifically so that it could handle lignin or other biomass, like wheat straw or corn stover, along with coal.

Ridderbusch noted that the biofuels refinery would only accept cellulosic matter if they did studies to make sure the local soil wasn’t harmed by the harvesting. The detritus from corn or other crops is typically left on the fields or tilled into the soil; removing too much of it could change the soil chemistry and deplete nutrients.

Midwest AgEnergy has studied experiments in Denmark aimed at finding the balance for using cellulosic feedstocks while protecting soil. The company has an advisory group of farmers who even traveled to Europe to study their processes.

To adopt cellulosic ethanol production, Ridderbusch said, “two things have to be true:

“The technology needs to be commercially available, and you have to know that the way it would be collected and brought to the plant doesn’t do anything bad to the soil quality and the value of the farm economy in the region. If it doesn’t work for everyone, you can’t make a cellulosic project work.”

Spiritwood’s website trumpets the fact that in 2012 President Barack Obama signed an executive order calling for 40 GW of new industrial combined heat and power by 2020. With an operating range between 50 and 99 MW depending on power prices and demand, the developers feel like they are playing a part in realizing the national goal.

Lancaster said that electricity sales by the cooperative are improving, after a three-year drop. The first quarter of 2014 saw sales 7 percent above 2013, he said. About half of that effect was attributable to especially cold weather, he said, but the gain also reflected the improving housing market and economy.

Despite an inauspicious start, the developers think Spiritwood and Dakota Spirit have a bright future.

“We just got caught by a recession and an ethanol plant that was already canceled,” said Lancaster. “We decided it would be beneficial to our members to lay up the plant for a while and not have an increase in rates. It’s an unusual move but something we had to do to tide ourselves through the recession. The economics will be very good once we’re up and running. And it will be good for the local economy in North Dakota as a whole.”

The coal plant is projected to create 43 jobs, 24 at the plant and 19 in the transport of lignite. The ethanol plant is slated to create another 40 positions.

“The more jobs, the more people we have, the more retail and restaurants,” she said. “Even one job is important to us. We’re very excited about the fact it will be opening.”