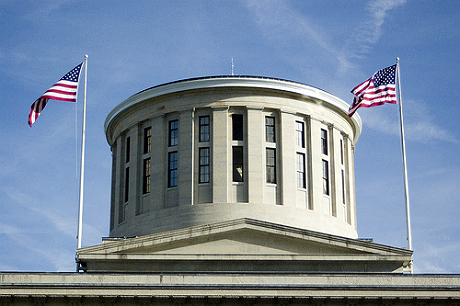 The Ohio Statehouse in Columbus. (Photo by Mike King via Creative Commons)

Critics showed up in force this week as Ohio’s House of Representatives began hearings on a bill that would dramatically alter the state’s clean energy laws.

The Public Utilities Committee for the Ohio House could vote on the bill as early as next week. If Senate Bill 310 becomes law, it could hurt both consumers and businesses, say opponents.

As passed by the state Senate last week, SB 310 would freeze Ohio’s energy efficiency and renewable energy standards for two years, pushing final targets from 2025 to 2027. Meanwhile, a study commission would review the law’s mandates.

However, last-minute changes made to the bill would also dramatically change both standards.

“They essentially gutted the standards, so that when they do come back they’ll be essentially meaningless,” says Ted Ford, president of Ohio Advanced Energy Economy.

“There won’t be any opportunities for them to receive some help in investing in the energy efficiency of their home,” notes Max Neubauer, a senior policy analyst for the American Council for an Energy-Efficient Economy (ACEEE).

“Energy efficiency can save money for Ohioans on their electric bills,” says spokesperson Scott Gerfen at the Office of the Ohio Consumers’ Counsel (OCC). “The alternative to energy efficiency is to buy more electricity, but buying electricity costs consumers much more,” Gerfen adds.

Electric utilities won’t be required to offer such programs to all their customers while standards stay frozen.

“Those folks who don’t have opportunities to invest in their energy efficiency will be subjected to potentially higher energy bills, because over the course of these two years, it’s likely that rates will continue to rise,” notes Neubauer.

So far, energy efficiency programs have provided $2 in savings for every $1 spent, says a recent report from the Ohio Manufacturers’ Association. The programs have saved Ohio customers more than $1 billion since they began in 2009.

The Ohio Manufacturers’ Association based its calculations on utilities’ own reports to the Public Utilities Commission of Ohio (PUCO). Updated utility reports are due today.

“The overall trend is that for the next five to 10-plus years, there’s still a lot of cost-effective energy efficiency out there, regardless of the state of the economy” and other factors, says Neubauer.

The freeze could also hurt consumers when utilities start to comply with forthcoming federal rules on carbon emissions, say both Ford and Neubauer.

“The timing is really poor, given what we know is about to be required of the state,” says Ford.

Energy efficiency and renewable energy programs could help utilities meet the new standards. Utilities that don’t have those programs will need other ways to comply, which will cost money.

“That all ends up on the bills of the consumer,” says Neubauer.

And while SB 310 would require consumer bills to show the costs of energy efficiency programs, bills wouldn’t have to list the savings—or various other costs that go into the bill.

The PJM Interconnection, which manages the grid serving Ohio, allows commitments to reduce customer demand through energy efficiency to compete directly with coal, natural gas, nuclear power, and other forms of energy in capacity auctions.

“They’re directly transferable,” explains Neubauer. “You can either use some energy efficiency to meet the demand, or you can use the supply side.”

Numerous reports, including an ACEEE analysis released this spring, have found that energy efficiency is more cost-effective than building new generating capacity.

However, utilities won’t necessarily bid in energy efficiency during the freeze under SB 310. And afterward, they’ll likely be bidding in less than the current law would require.

One reason is that SB 310 would let many large customers opt out of paying for and getting direct benefits from utilities’ energy efficiency programs. Baselines for energy efficiency targets would not include those customers’ electricity usage, either.

“You’re excluding a huge percentage of Ohio’s market from complying with these rules and providing benefits to the entire energy system,” says Neubauer.

Some large energy users already benefit from “reasonable arrangements,” or negotiated rates. Moreover, utilities can charge consumers for any costs linked to those large customers’ rates.

“That gives them a lower rate than the rest of us pay,” says Ford. An opt-out from the energy efficiency requirements would give large users an even bigger advantage.

Also, under SB 310, many more things would count as energy efficiency, even if they wouldn’t qualify for the PJM auction.

Many new things that SB 310 would count as energy efficiency are “already going to be done anyway,” says Ford. “You’ve watered this thing down to the point where it is meaningless.”

For example, utilities could count upgrades to transmission and distribution, even though such projects don’t directly affect customer demand or save consumers money.

Moreover, counting those projects could make it easier for utilities to exceed energy efficiency targets, both during and after the freeze.

Customers would have already paid for those projects. Now critics say customers might pay even more because of incentives for “shared savings.” Those charges let utilities recover a part of energy efficiency savings that are achieved when they go above and beyond what the law requires.

“Making it easier for utilities to meet the mandates can show up as increased charges on Ohioans’ electric bills,” notes Gerfen, “when counting more measures as energy efficiency allows utilities to charge more shared savings and lost revenues to consumers.”

The result could be a “boondoggle” for utilities, notes Samantha Williams, a staff attorney for the Natural Resources Defense Council.

“Not only would the utility get to count these savings that don’t benefit consumers, they would also get to earn ‘shared savings’ through extra charges for customers on their electricity bills,” Williams says.

Similarly, if utilities opt to continue any existing energy efficiency programs during the freeze, they could be deemed to exceed the targets. Thus, utilities might qualify for shared savings without doing anything new.

‘A lot of uncertainty’

Language in SB 310 also raises questions about whether the energy efficiency and renewable energy standards really will resume when 2017 arrives.

The bill would set up a study commission to review the standards. Yet language about an “intent” to “reduce” mandates suggests how that study should come out, say critics.

“The bill should avoid suggesting the outcome of reducing energy efficiency mandates in advance of the study committee’s work,” says Gerfen.

“Further, the scope of the study committee’s review is too limited,” Gerfen says. OCC wants any study commission to also review other provisions in the law that “unfairly favor utilities and increase Ohioans’ electric bills.”

Ohio Consumers’ Counsel Bruce Weston detailed some of those issues in testimony before the Ohio Senate Public Utilities Committee on April 30.

Additionally, the bill would forbid the Public Utilities Commission of Ohio from ruling on any pending electric rate plans or applications before 2017. That could require continuation of terms in certain settlements beyond the time OCC and some utilities agreed to, says Gerfen.

SB 310’s language also makes it harder for companies to plan ahead for their businesses, say critics. Companies often plan capital projects for several years in the future, and having standards in place can make it easier to commit to and finance those undertakings.

However, SB 310 makes it hard to know what the law will be after two years. “From a business perspective, it adds a lot of uncertainty in the market,” says Neubauer.

As a result, Ohio businesses could lose out on savings. Because of regulatory uncertainty, companies that design and install energy efficiency projects would not “see Ohio as a vibrant market for their services,” Neubauer says.

Expanding the scope of what counts would basically “flood the market” for energy efficiency, notes Ford. That would also make it harder for combined heat and power and waste energy recovery projects to compete in Ohio’s marketplace.

Currently, at least half of Ohio’s required renewable energy must come from within the state. SB 310 would eliminate that requirement.

That means any renewable energy deliverable within the PJM regional transmission grid would count. Even hydropower from Canada could satisfy the requirement, notes Ford.

Additionally, any contract for renewable energy resources would have to include a provision releasing parties from their obligations if the law changes in the future. Companies would have a harder time relying on others to fulfill contractual commitments, say critics.

“It basically undercuts our entire in-state industry,” Ford says. “It threatens quite a bit of investment too.”

Investors have already spent more than $1 billion on renewable energy projects in Ohio, says Ford. Another $2.5 billion for wind projects is “shovel-ready.” The PUCO has already given the go-ahead for constructing those projects.

Without the in-state renewable energy requirement, however, “those projects are not going to be built,” says Ford. “That’s $2.5 billion in investment that goes away.”

Despite concern over the scope of changes proposed, the Ohio legislature has moved ahead quickly with the current version of SB 310.

The Ohio Senate passed the bill in a late-night session last week, less than 40 hours after the language of Substitute Senate Bill 310 became public.

The Public Utilities Committee for the Ohio House plans to hear more testimony next week. It could vote the bill out of committee very soon afterward.

Republicans currently hold a majority in the Ohio Senate and House. They could be acting against some of their own party members, notes Ford.

“The vast majority of people who are in this industry are, in fact, Republican small-business people,” he says.

“It’s our plan to make sure that people fully understand what this bill does and why it’s bad,” Ford adds. He urges lawmakers to take more time to review SB 310 instead of rushing ahead.

“They have an opportunity to hit a pause button of their own on this bill and consider what it’s going to do before they actually move to a vote,” Ford says.

Correction: An earlier version of this story misstated how limits on PUCO rulings before 2017 could affect certain settlements between utilities and the Office of the Ohio Consumers’ Counsel.

The American Council for an Energy-Efficient Economy (ACEEE) and the Natural Resources Defense Council (NRDC) are members of RE-AMP, which also publishes Midwest Energy News.