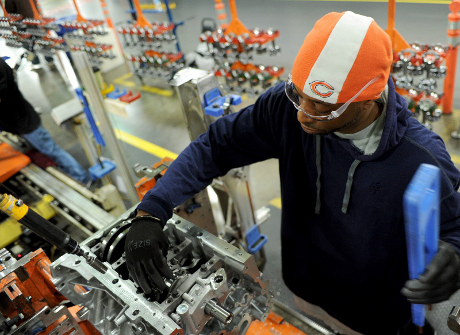 With the help of the U.S. Department of Energy, Ford Motor Co. now boasts that since 2009 — through expanding production of fuel-efficient vehicles — it has avoided 2.38 million tons of carbon dioxide emissions and saved 268 million gallons of gasoline.

The company reached a milestone in early May when it sold its 500,000th F-150 pickup truck equipped with a fuel-efficient EcoBoost engine. Ford credits the V-6 truck engine for nearly one-fifth of the fuel savings it attributes to the EcoBoost fleet, which also includes four- and three-cylinder engines used in smaller cars.

Driving that progress was a $5.9 billion loan from the federal government to transform 13 factories across six states into state-of-the-art assembly plants.

If the metro Detroit-based automaker’s success is any indication, federal officials say the country’s automotive manufacturing industry is poised to adapt to the changing landscape of fuel efficiency mandates and consumer demand.

The Ford loan is part of the Department of Energy’s Advanced Technology Vehicle Manufacturing Loan Program, which is set to distribute another $16 billion in expansion capital to not just automakers, but also the chain of suppliers below them.

“The ATVM Loan Program was able to make some very important loans to vehicle manufacturers in 2009 when the U.S. auto industry was in real distress,” Peter Davidson, executive director of the DOE’s Loan Programs Office, said in a statement to Midwest Energy News.

“As the industry has bounced back, the current demand for expansion capital has moved down the supply chain. That’s the sweet spot for ATVM loans and we’ve made an effort to clarify within the industry that we can also finance the manufacture of components that increase vehicle efficiency.”

The loans — which have so far been given to U.S. and international automakers in various amounts — are helping the industry meet President Obama’s fuel-efficiency standard of 54.5 miles per gallon for cars and light-duty trucks by model year 2025. More than $8 billion has been issued under the program so far.

Ann Wilson, senior vice president of government affairs for the Washington-based Motor & Equipment Manufacturers Association, said now that automakers have regained their financial footing, it’s “prudent” for more of the capital to go directly to suppliers.

“Suppliers are responsible for at least a third of new R&D for new vehicles,” she said. “It’s important to get these loans directly to manufacturers who are making this technology now.”

In its early stages, Wilson said, “For a variety of reasons [the loan program] was not particularly successful for the supplier community.” She said her members were “pleased” to see the Department of Energy’s renewed push for the loans to reach beyond big-name automakers.

In an April 2 letter to the association, Davidson clarified that, while component suppliers qualified for these loans all along, they’re now encouraged to apply to expand the effectiveness of the program.

The program is open to both foreign and domestic manufacturers, but projects must be in the U.S. Advanced Technology Vehicles are light-duty vehicles with a fuel economy rating of at least 125 percent of the 2005 average combined fuel economy for similar vehicles. Congress appropriated the money to the Department of Energy in 2009.

In addition to Ford, the recipient of the largest loan so far, the program issued a $1.45 billion loan in 2010 to Nissan to finance construction for its new Leaf battery facility in Tennessee. It also issued a $465 million loan in 2010 to Tesla to reopen a California plant for assembling its electric cars. Tesla’s loan was fully repaid in 2013.

Loans that were issued to Fisker Automotive, a plug-in hybrid carmaker, and The Vehicle Production Group, a Michigan-based manufacturer of vans that ran on compressed natural gas, were discontinued after the department determined the companies wouldn’t be able to pay them back. Last year, the loan program faced scrutiny from congressional Republicans over the failures of Fisker and VPG.

The length of the loans and payback timelines vary, though the program declined to disclose specifics of the loan stipulations.

Ford’s loan helped the company upgrade 13 factories in Michigan, Missouri, Ohio, New York, Kentucky and Illinois. The revamped production line will affect more than a dozen models of Ford cars, including the F-150, Taurus and Fusion.

In early May, the company announced the sale of the 500,000th EcoBoost engine-equipped F-150. “These are the kinds of results that the ATVM Loan Program was created to produce,” Davidson, of the federal loan office, recently wrote on the program’s website.

There was “skepticism about EcoBoost when we first introduced it” in 2011, said Doug Scott, Ford Truck Group marketing manager. Buyers of full-size pickups tend to favor V-8 engines; the EcoBoost option was a much smaller V-6.

“Customers have accepted it much more so than even we thought in our wildest imaginings,” Scott said. “Not only is it very fuel efficient, but it has great power capabilities.”

EcoBoost is a combination of turbocharging and direct injection. “Those technologies allow for the engine, when not being called upon for towing or heavy hauling, to be able to get the fuel economy of a six-cylinder,” Scott said.

The EcoBoost F-150 gets 16 miles per gallon in the city and 22 on the highway, which is among the higher end of fuel efficiency among 2014 models of standard pickup trucks, according to the Department of Energy.

Scott said “we obviously fully intend to achieve” the fuel economy standards finalized by the Obama administration in 2012.

Wilson, of the manufacturers association, says it will be challenging for all in the supply chain to meet the new fuel-efficiency standards.

“It’s going to be a challenging time, no doubt about it,” she said. “Exciting, but challenging.”