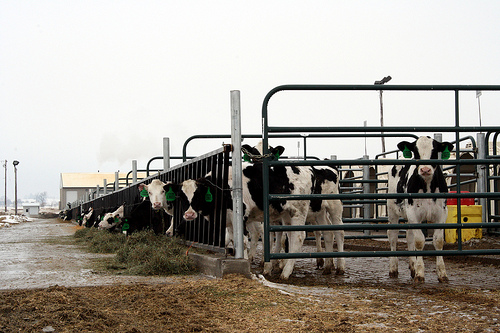 The farming region of central Wisconsin presents a bucolic image, home to rolling fields, numerous dairies and a family-owned chicken processing plant that started in 1925 with two brothers delivering eggs and livestock.

These operations also produce a lot of waste, including countless tons of manure and the detritus from processing poultry.

Now New Chester Dairy and Brakebush Brothers are teaming up through a Milwaukee-based company to turn that unsightly waste into renewable heat and power.

Clean Energy North America is building a biodigester on New Chester’s land, which will extract methane from the dairy’s manure and from the waste of nearby food processors including Brakebush. The biogas will be sent via an underground pipeline to Brakebush’s plant about 16 miles away. There it will be burned to generate up to 7 MW of electricity, supplying more than 80 percent of Brakebush’s load. And the waste heat from the generation will be used for Brakebush’s hot water.

That means Brakebush — a national company that distributes chicken to schools, restaurants and the military – will drastically reduce its need for natural gas for heating and electricity from the grid that would likely come from coal-fired power plants. And the manure and other waste will be turned into an efficient fertilizer, reducing the problems posed by bacteria and run-off when manure is applied directly to fields.

This project, called New Chester Clean Energy, is an example of the creative renewable energy and combined heat and power operations that could help farms across the Midwest save on energy costs and reduce their environmental impact and carbon footprint.

But such projects depend on a favorable climate from local utilities and state regulators and legislators.

Wisconsin is not considered politically hospitable to distributed renewable energy projects like this, as outlined in a report last year by the Wisconsin Energy Institute. Clean Energy North America vice president Murray Sim, an expert who has worked at utilities in the Midwest and abroad, said the company will likely not do another such project in the state any time soon.

Energy at Brakebush will be generated “behind the meter,” without buying or having the energy delivered by a utility. But the equipment is owned largely by a third party – Clean Energy North America – though Brakebush holds a minority stake.

Such third-party ownership of renewable energy installations has been a regulatory sticking point nationwide as utilities fear such setups could cut into their customer base and their profits.

Third-party ownership is often necessary to make a distributed renewable energy project feasible: if the owner of the property can’t afford to construct and operate the system themselves, or if the property owner is a non-profit institution which can’t take advantage of tax breaks that are often crucial to financing renewable energy.

Third-party ownership has presented widespread legal and regulatory challenges with solar installations; a case in Iowa is before the state Supreme Court.

Whether electricity is being generated from solar panels or biogas, utilities and public service commissions can argue that a third party owner should be treated like a utility itself, regulated and subjected to costs and procedures that could make the setup untenable.

The New Chester project is proceeding without being treated as a utility, and it appears it will work out just fine, according to Sim. But several communications from the Wisconsin Public Service Commission make him think state officials – and Wisconsin utilities who have significant political power – might try to block future such projects.

Among the things that make Sim nervous are a February 2012 letter from the Public Service Commission to state representative Gary Tauchen in response to his inquiry about promoting third-party power purchase agreements for solar and biogas installations. The commission’s gas and energy division administrator Robert Norcross told Tauchen that unless the owner of the installation is just providing energy to themselves (“self-generation”), biogas and solar operators would qualify as utilities subject to regulation.

Norcross said an exemption to this standard could be created, but that would require a law being passed and it would have to be done carefully to avoid moving toward deregulation.

The commission’s legal counsel reiterated this opinion in an April 2014 letter to Madison Gas and Electric Company regarding interconnection requests the utility had gotten from third-party-owned distributed energy installations. Neither letter holds any official weight, but they suggest how the commission is likely to rule if a utility were to challenge a third-party-owned installation in their service territory.

The New Chester setup is safe in part because Brakebush does own a portion of the project, and because the plant is served by a local electrical cooperative, not a large for-profit utility. But investors are always leery of having to negotiate such setups, and regulatory resistance to third-party ownership makes it much harder to get financing.

“The local [electric] cooperative was actually okay with this arrangement because Brakebush is the largest employer in Marquette County, but it’s not clear they would have gotten the same kind of flashing yellow light” – as opposed to a red light — “from an investor-owned utility like We Energies,” said Michael Vickerman, program and policy director of RENEW Wisconsin.

“The way the situation is now, the individual utility acts as a gatekeeper for these types of installations,” Vickerman said. “The Public Service Commission has not taken a formal position, so it’s a situation fraught with uncertainty. And money people don’t like uncertainty.”

“The utilities are in the driver’s seat when it comes to electric policy, they have control over the state legislature,” said Vickerman. “If we want to clear up this question and also set boundaries around what kind of third party finance projects are allowed and which are not allowed, legislation would be required.”

Currently, “It’s terra infirma, we just don’t know what the lay of the land is going forward,” Vickerman said.

RENEW Wisconsin (a member of RE-AMP, which also publishes Midwest Energy News) is part of a coalition of more than 100 organizations calling for legislation that would exempt behind-the-meter third-party setups from regulation as utilities.

Proposed legislation — which drew national attention for drawing support from the state’s Libertarian Party — was drafted last session but never progressed. Vickerman said a bill will likely be introduced when the legislature reconvenes next year.

Proponents say situations like New Chester Clean Energy – or a school or church that hires a company to operate solar panels on their roof – should clearly not be treated like electric utilities. While Brakebush is a private company, non-profit institutions often need to enlist a for-profit company to operate their energy installations so they can take advantage of tax breaks.

“We’re talking about self-generation, using someone else’s equipment,” Vickerman said. “These are not disguised power producers that want to flood the grid with electricity and receive retail rates for it. This is basically power that is going to be consumed onsite.”

Sim said his company will consider projects similar to the New Chester one in Iowa and Minnesota in the future, but no more in Wisconsin unless there is a major political shift.

Many farms across the Midwest have biodigesters onsite to turn their manure into gas, and then that gas can be turned into electricity with a generator. If a farm doesn’t need all the electricity it produces it can be sent back to the grid. But that may or may not be economical depending on the local policies for selling energy back to the grid. In Wisconsin, there’s little incentive to send energy back to the grid, noted Andy Olsen, A Madison-based policy advocate for the Environmental Law & Policy Center.

Electricity demand at a dairy is relatively low, making it unlikely that they would be motivated to produce electricity onsite. That’s where sending the biogas to an operation with greater energy needs – like Brakebush – is a novel solution.

“Dairy farms are not high electric load – it’s up and down, they don’t really have air conditioning or heating like a manufacturer,” said Sim. “At a chicken plant, you have day shifts, then disinfecting at night, you have the freezers. It’s a much larger, relatively steady electric load.”

When an operation like Brakebush can use almost all the electricity generated behind the meter, utilities can just stay out of the way by not opposing the installation. But more agricultural and livestock operations would likely generate electricity onsite if utilities actively supported the concept, Olsen noted. They could do that by offering more attractive buy-back rates for electricity, he said, and by more efficient interconnection policies.

“We need to hear more ‘can-do’ from Wisconsin utilities and less foot-dragging and obstructionism,” Olsen said.

If farms are generating electricity onsite, they are also likely to adopt even more efficient combined heat and power systems — using the waste heat themselves or sending it to nearby operations to warm buildings, dry grain or incubate eggs.

Sim noted that the dairy gets significant benefits from providing the land and the manure for the biodigester. Instead of having to deal with their manure, they offload it then get back a much more attractive fertilizer product. After the manure is sent through the biodigester, what remains has much less bacteria and phosphorus (which causes nutrient pollution in nearby waterways), and foul-smelling hydrogen sulfide gas has been removed.

“There’s a fraction of the odor you had before – not that really yucky manure smell,” Sim said. “You now have a solid fertilizer that looks a little bit like peat moss. Instead of spreading it evenly on the field, you can put it right where it’s needed.”

Olsen said the Brakebush project should be looked at as a model.

“There’s been talk in the state for a long time about building biogas pipeline systems,” he said. “Now Clean Energy North America has done just that, taken this idea that engineers and others were discussing and made it a reality. They should really be encouraged and praised for what they’re doing.”

Editor’s note: Biodigesters remove hydrogen sulfide, not hydrogen sulfate, as erroneously stated in an earlier version of this story.