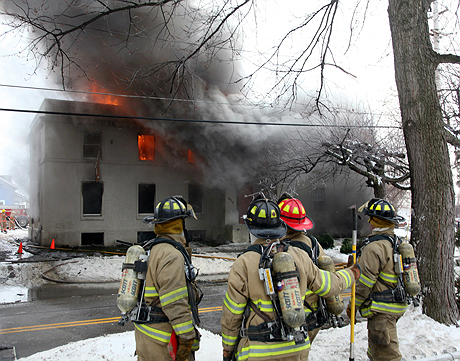 Despite ongoing safety concerns and the urging of state regulators, the Ohio legislature has so far passed up an opportunity to impose tougher penalties on those who break safety rules for natural gas pipelines.

Ohio House Bill 483 had a provision to double penalties for safety violations when it was introduced in March. However, the version passed by the Ohio House of Representatives last month eliminated that section.

While fines for violations are rare, resource-strapped regulators say they provide a critical incentive for compliance with safety rules.

HB 483 is part of the Ohio’s Mid-Biennium Budget Review. The Ohio Senate Finance Committee reported the bill out this week, and the Senate passed it on Wednesday. Any differences between the House and Senate versions will require resolution by a conference committee.

Although most of HB 483 addresses other subjects, proposed and deleted energy issues touch on public safety and other concerns.

“We strive to inspect every natural gas distribution system every year,” says John Williams, Director of the PUCO’s Service Monitoring and Enforcement Department.

“We never get to the point where we inspect every foot of pipeline out in the community,” says Williams. “There’s just not enough time and not enough resources.”

Instead, the PUCO relies on an audit system. Part of investigators’ work focuses on pipeline records. The rest deals with what happens out in the field.

When inspectors spot violations, they send out a Notice of Probable Noncompliance. If natural gas companies don’t resolve any problems to the PUCO’s satisfaction, they can face further enforcement and fines.

During the records review part of audits, PUCO inspectors focus on leakage inspections, corrosion, construction, and other issues.

“We’re going to be looking through all of that to be sure they’re conducting their programs on the cycle they should,” explains Williams.

The idea is that adhering to regulatory programs should prevent or catch potential problems before there are serious safety risks. Yet inspectors might find dozens of violations in any given year.

One 2013 notice claimed that Vectren Energy had not inspected 43 test stations and other equipment within the proper time frame.

In another 2013 case, the PUCO’s notice said that capacity testing records were not available for the relief valve at a Dominion East Ohio Gas station.

The notice in yet another 2013 case claimed that records for a Duke Energy pressure recording station showed that the relevant pressure limit had been exceeded multiple times. According to the notice, records of any response to the problem were not readily available.

“We’re also going to go out in the field and look at their facilities as well,” Williams says.

For example, an investigator might use leak detection equipment to check on the truth of a leakage repair record. “We should not detect any leak at that location,” Williams says.

In a similar vein, a 2013 notice found that Columbia Gas of Ohio had not properly buried a section of plastic natural gas pipe. The company had found that exposed section more than five years earlier.

“The plastic pipe will tend to degrade if it’s exposed to sunlight for a long period of time,” Williams notes.

Investigators may check random parts of equipment, too. For example, an investigator might ask a utility representative to locate a particular critical valve.

Those valves affect the safety of the distribution system, so the law requires inspections at least once every 15 months and at least once each calendar year. If utility personnel can’t find the valve or it’s rusted over, that suggests the operator failed to do a timely inspection.

Complaints can also lead to a Notice of Probable Noncompliance.

Last year, for example, a Dominion East Ohio Gas customer complained multiple times about repeated gas outages in her housing development in Kent, Ohio. The PUCO’s notice said its staff had determined that the existing pressure regulation station and its equipment were inadequate.

Williams says all types of gas pipeline safety violations are a concern for the PUCO — those found through records review and those found in the field.

“We consider them all very serious and kind of weigh them evenly,” Williams says.

‘We resolve the issues’

“We will always comply with any concerns about issues with the Commission,” says Vectren spokesperson Chase Kelley.

Pipeline operators get 30 days to respond to a Notice of Probable Noncompliance. The PUCO then has the next move.

“They can open up a formalized case or they can continue to resolve the issue informally,” explains Eric Hall, Director of Operations and Compliance for Dominion East Ohio. “That’s typically the route that they take.

“When the Commission comes in, they want a prudent system, and so do we. We both look at safety,” says Gary Hebbeler, Duke Energy’s General Manager of Gas Operations in Kentucky and Ohio.

“If there’s maybe some different points of view, then we’ll sit down and discuss those,” Hebbeler continues. “We resolve the issues that we have. And if we need to go out to do something to remediate, we will.”

“Regardless of what the notice says, we’re going to cooperate fully with the PUCO to the fullest extent possible to ensure compliance,” says Shawn Anderson, Director of Regulatory Affairs for Columbia Gas of Ohio.

“With that said, every notice of probable noncompliance is very different,” Anderson says. “You really have to look at the situation and assess what’s right for that particular situation.”

Assessment of monetary penalties by the PUCO is relatively rare, too. Nonetheless, the PUCO has collected some substantial penalties.

One case fined Duke Energy $500,000 after investigation into a 2010 explosion at an apartment building in Lebanon, Ohio. The event injured seven people and caused about $1 million in property damage.

Another case fined Dominion East Ohio $500,000 after a series of fires in Fairport Harbor, Ohio. About $1.3 million in property loss occurred in that 2011 event, including harm to 11 homes and damage to hundreds of appliances in other homes.

The Office of the Ohio Consumers’ Counsel sought to intervene in that case. However, the PUCO denied the agency’s motion.

One rationale for monetary penalties is that they deter violations of the law. When HB 483 was introduced in the Ohio House, the bill sought to double potential penalties for natural gas pipeline safety violations. As proposed, the potential daily penalty for violations would rise to $200,000 per day, with a $2 million cap.

That provision was not in the amended bill that the Ohio House passed last month. It’s unclear why the provision came out.

The PUCO submitted an amendment to put the higher penalties back in the bill, says PUCO spokesperson Matthew Schilling. However, the language did not make it into the version as reported by the Senate Finance Committee this week.

Another provision cut from the initial version of HB 483 would have let natural gas utilities charge customers for cleaning up old manufactured gas plants.

“The PUCO did not request this provision, did not offer comment on it, and does not object to its removal,” says Schilling.

The issue is currently under review in an Ohio Supreme Court case involving Duke Energy. The Ohio Manufacturers Association, the Office of the Ohio Consumers’ Counsel, and other appellants in that case say Duke Energy shouldn’t charge customers for costs that do not contribute to providing gas service. About $55 million is at stake.

The version of HB 483 passed by the Ohio House also added new energy provisions. One would give the PUCO express discretion to waive particular pipeline safety standards.

“The PUCO feels we already have authority to do this under current law,” but does not object to adding the provision, says Schilling.

The Senate Finance Committee kept that language in the amended version it reported out this week.

However, the Senate Finance Committee added a new amendment dealing with setbacks for wind farm turbines from adjacent properties. That provision wasn’t in the House version at all.

The version reported by the Senate Finance Committee also deleted provisions from the House version that dealt with the baseline for Ohio’s energy efficiency standard. Those requirements apply to electric utilities.

The PUCO asked the Senate to remove those sections, says Schilling, because they would need “corrective language” before the Commission could implement them.

It’s not clear why those energy efficiency provisions showed up in HB 483, instead of other energy bills.

The Ohio Senate passed Senate Bill 310 earlier this month. The bill would substantially change Ohio’s energy efficiency and renewable energy standards, in addition to freezing them for two years. The bill’s future is uncertain after the House delayed a vote this week.