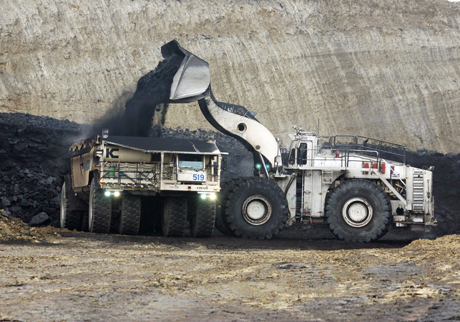 Lignite coal is mined at the Freedom Mine in Buelah, North Dakota in 2007. (AP Photo / James MacPherson, File)

North Dakota is famous for its shale oil and gas reserves – the Bakken Shale has created boom towns, fueled the state’s economy and even changed the railroad industry as trains transport the shale products cross-country.

But North Dakota is also heavily invested in another fossil fuel – massive reserves of lignite coal. And even as coal plants close nationwide and cities and states adopt policies curbing the use of coal-fired power, North Dakota is still fiercely protective of its coal – which provides almost 80 percent of the state’s energy, major electricity exports to neighboring states, and scores of mining and related jobs.

Elected officials and industry backers don’t plan to shift their focus on coal, they say, despite impending EPA rules for new and existing coal plants which could make things much more difficult for the state’s industry.

North Dakota is sparsely populated, with only about 700,000 residents. And while the shale boom has created significant electricity demand, North Dakota’s seven coal plants still export a majority of their energy to neighboring states – and such exports are crucial to the plants’ economics.

North Dakota has the world’s second largest reserves of lignite, a wet, heavy coal with low energy content; with enough to burn for 800 years at current rates according to the Lignite Energy Council.

While more desirable coal from Wyoming’s Powder River Basin is transported to power plants across the country, it is prohibitively costly to transport the heavy lignite long distances. So North Dakota’s power plants are located near the mines, and the power they produce is exported.

In April, the North Dakota coal industry scored a victory with a federal judge’s ruling striking down part of a Minnesota law that could have torpedoed the construction of new coal plants in North Dakota. But even with that victory under their belt, state coal backers see their future on the brink because of pending EPA rules on carbon emissions.

The EPA’s proposed new rule covering carbon emissions from existing coal plants will be announced June 2. That rule could seriously impact North Dakota’s coal fleet, though there may be enough flexibility in the rule that North Dakota could meet carbon reduction requirements through investments in wind power, efficiency or other measures while minimizing the effects on existing coal plants.

Meanwhile, the EPA is still formulating the final version of its carbon pollution rule for new coal plants; the proposed rule was announced in September 2013.

The EPA is required under the Clean Air Act to regulate greenhouse gases that cause climate change, as ordered by a 2007 Supreme Court decision. And because coal’s carbon emissions are high relative to other fuels, the coal industry will disproportionately feel the brunt of new regulations.

“No utilities are currently seriously considering coal as a fuel source for new generation because of the proposed EPA rules that are technically impossible for coal to comply with in scale,” said North Dakota Public Service Commissioner Julie Fedorchak.

Lignite Energy Council president and CEO Jason Bohrer agreed that if the proposed rules for new plants are finalized, it “would just eliminate and stop construction and planning of any new coal plants.”

“We’ve been working very hard to make sure EPA understands how our industry works before they write the rules,” continued Bohrer. “If the rules come out and don’t look achievable or reasonable, we’ll go back to EPA and go over our concerns with them.

“We’ll make sure whatever errors or mis-perceptions might have gotten into the proposed rules don’t get into the final rules,” he added.

In February, EPA Administrator Gina McCarthy visited North Dakota at the invitation of U.S. Sen. Heidi Heitkamp (D). Heitkamp said she wanted McCarthy to hear first-hand about the importance of the state’s coal industry and the ways coal could generate power with less pollution.

‘A realistic path forward for coal’

Brad Crabtree is vice president for fossil energy at the Great Plains Institute, and co-director of the National Enhanced Oil Recovery Initiative, a coalition of industry, labor and other groups advocating increased use of carbon dioxide for recovering remnants of oil from depleted wells. He said that the federal government and the state government should do everything possible to promote and incentivize increased carbon capture for enhanced oil recovery.

He thinks developing technology that can be used by other countries intent on increasing their coal use is an important way to fight climate change in the bigger picture.

“I’m not saying we should run inefficient coal-fired power plants without proper technology,” said Crabtree. “I’m saying it is a danger to not be a leader in demonstrating the newest and best technology for managing carbon dioxide. We’ll have a much greater impact reducing emissions globally if we show an example to emerging economies using more and more coal.”

Crabtree said North Dakota should be center stage in efforts to promote carbon capture and sequestration.

During her February trip, McCarthy visited the Dakota Gasification Company’s plant in Beulah, which turns coal into synthetic natural gas. The plant captures its carbon emissions and ships them via pipeline to Saskatchewan, for use in enhanced oil recovery.

Similarly, on May 24, Heitkamp introduced a bill that would significantly increase federal support and incentives for development of “clean coal” technology, including carbon capture and sequestration. The bill would direct more Department of Energy funding to the arena, increase tax credits for carbon sequestration, and create government research and development programs for the technology, among other things.

“I have long said that we need to reduce emissions, but the Administration’s proposal is forcing companies to use clean coal technology that isn’t yet available,” said Heitkamp in a May 22 statement. “That just doesn’t make sense. Instead, we need to incentivize the development of clean coal technology to improve air quality while also finding a realistic path forward for coal – as my bill would do.”

Crabtree said that other innovations can also help North Dakota coal plants survive or launch even with EPA carbon limits. Plants can reduce their emissions by increasing efficiency, he noted, including with arrangements like the Spiritwood station to open this year, which will recycle its steam to fuel nearby ethanol and malt plants. Elsewhere waste heat is used to dry the lignite coal, a necessary process before burning.

“If we can combine a well-designed EPA rule that’s flexible and allows states the creativity to maximize their resources as well as smart financial incentives that allow us to develop new technologies, you put those together and I think there is a future for significant coal-based energy in North Dakota,” Crabtree said.

A victory for North Dakota coal

The law mandated that imports of coal-fired power be offset with other carbon emissions reductions. North Dakota and coal industry proponents argued that this requirement violated interstate commerce protections in the U.S. Constitution, and the judge agreed.

Minnesota will appeal the decision, said Gov. Mark Dayton, who argued the law is crucial to prevent “toxic emissions” from North Dakota plants wafting into Minnesota.

Fedorchak said the law was written in a way that didn’t affect existing plants but made it very difficult to build new plants.

“Once power goes on the grid you can’t track it,” Fedorchak said, noting that North Dakota plants export about 50 percent of their energy to Minnesota. “With the demand growth in North Dakota driving the need for new generation, it would be difficult to ensure that new coal-fired electricity built in North Dakota in the future doesn’t make its way to Minnesota.”

“As a policy matter people can have their own views, but electricity flows regionally, and under the Constitution you can’t build a wall at the state barrier and say, ‘We only want certain electrons flowing into the state,’” said attorney Peter Glaser, who represents energy and mining interests as part of the Climate Change Practice Team of the Washington firm Troutman Sanders.

Alternatives in a coal state?

Bohrer said the coal industry in North Dakota brings in $100 million in revenue each year and supports 4,000 direct jobs and 17,000 indirect jobs.

“The industry supports this really high quality of life that we have not just in North Dakota but in Minnesota, the upper Midwest,” he said. “We enjoy some of the lowest electricity rates in the nation, and that allows manufacturing you wouldn’t have other places.”

Bohrer describes coal as a necessary part of an “all of the above” energy strategy.

But there are other options.

For one thing, North Dakota has an abundance of natural gas in its shale formations. The Bakken produces so much natural gas – released in the process of extracting oil – that much of it is flared off without being collected or used. More pipeline and other infrastructure is being built to capture natural gas, and the amount of natural gas marketed from North Dakota has risen steeply in recent years.

“It’s important to note that North Dakota also has a strong shale gas resource seeking in-state markets for use,” said Fedorchak. “This resource will likely be tapped to fuel electricity generation to meet the significant and growing need for base load power.”

North Dakota also has strong wind resources, ranking sixth in wind potential and 12th in installed wind capacity, according to the American Wind Energy Association, whose website says: “North Dakota has rapidly grown its wind capacity for several years, but is still only using a fraction of its potential resource.”

North Dakota lacks a mandatory renewable portfolio standard; it has a voluntary objective of 10 percent by 2015. But wind farms in North Dakota can help meet renewable energy requirements in neighboring states, including Minnesota, where standards range from 25 percent to 31.5 percent for different utilities by 2020 and 2025.

Xcel has two major wind projects in the works in North Dakota: a 200 MW project near Jamestown through a power purchase agreement with Geronimo Energy, and the 150 MW Border Winds project near the Canadian border.

And as a result of a recent rate case in North Dakota, Xcel Energy has committed to develop up to 400 MW of thermal generation in the state by 2036.

Previously, Xcel customers in North Dakota had been paying for biomass and community wind projects in Minnesota meant to meet that state’s renewable standard. As part of a recent settlement, North Dakota Xcel customers were relieved of that responsibility and North Dakota was ordered to “restack” its generation mix.

Fedorchak said that could mean investment in additional wind farms in North Dakota, with the money freed up from Minnesota renewable projects.

“Future development (of wind) will depend on future federal wind and carbon policy and the analysis of private sector businesses on its long-term profitability,” said Fedorchak.

“Quite honestly, the barriers created by the EPA in terms of carbon regulation have put a halt to new coal generation anyplace,” Fedorchak said. “The future of coal generation in North Dakota and anywhere in the U.S. rests on those rules, and the limits and time frames included in them.”

The Great Plains Institute is a member of RE-AMP, which also publishes Midwest Energy News.