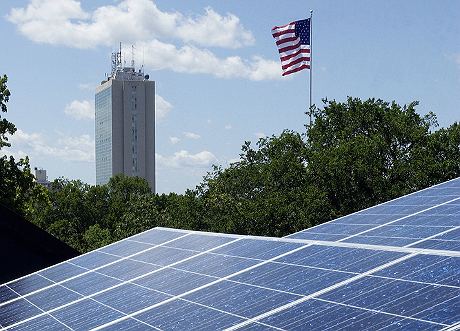 In less than two weeks, staff from the Michigan Public Service Commission will issue a draft report on how the state’s two largest investor-owned utilities could improve solar options for their customers.

But regardless of what the non-binding report says, the utilities — DTE Energy and Consumers Energy — have already signaled that they are unlikely to change their present course.

As recently as last week, after a three-months-long stakeholder process known as the “solar working group” wrapped up its last meeting, DTE said it does not make sense “to expand solar programs in Michigan and we do not support extending or increasing cross-customer subsidies for solar.”

A Consumers spokesman was more guarded, saying the utility is waiting to see what options are put forth in the report, but still emphasizing that the utility’s renewable-power efforts are led by wind.

For the past year, solar advocates have raised concerns about the two utilities’ pilot solar programs, saying they haven’t met the demand of customers who want affordable rooftop solar options. Consumers uses a lottery system in its program, which offers incentives for customer-owned solar. Even the MPSC acknowledges that the pilots have created a “boom and bust” cycle for solar in Michigan, as some customers are shut out of participating, which in turn affects rooftop solar installers.

Advocates say they are up against misperceptions, unfavorable statewide policy and unwillingness by the utilities to facilitate the industry’s growth in Michigan.

When they raised these issues before the MPSC last year, the commission intervened to establish the working group, ordering DTE to participate and take input from stakeholders on both sides of the table. Consumers voluntarily joined. The group, made up of about 30 to 40 participants, first met in February. MPSC staff is working on a draft report to be issued June 10 that solar advocates say could set the foundation for future policy proposals.

Julie Baldwin, manager of the MPSC’s renewable energy section, said the goal of the staff report is “not necessarily to make formal recommendations, but to highlight the information gathered in this work group and present a range of options along with cost information, cost estimates for the various programs and possible sizes of programs for solar going forward.”

The group also looked into ways the utilities could expand community solar projects. However, “I don’t anticipate the report will include specific recommendations on the kind of solar program a utility should have,” Baldwin added.

Programs at capacity, but no plan to expand

One of the factors driving the work group is the fact that each of the utilities’ pilot programs are at capacity with more wanting to join.

Solar installers “talk about the difficulties in selling solar PV systems to customers when customers are not sure if they’re going to be picked in a lottery system,” Baldwin said, referring to Consumers Energy’s method for selecting customers in its pilot program.

“Solar advocates are building quite a statistically deep and, from what I can tell, valid case that the economics of solar have shifted so much that to not do it in Michigan right now would be foolish and also very hard on a certain sector of the state’s economy,” he said.

“Unless (the MPSC) ignores the presentations that have come to them, they’re going to be hard-pressed to not issue a report that says it makes sense to move forward.”

For Consumers, solar makes up less than 1 percent of its total energy portfolio. The bulk of its renewable energy is generated by wind power.

“We’ll look to get some guidance from the work group and the MPSC to see if there’s any expectation that we should do anything differently,” Wheeler said. “Ultimately, one thing we want to be very considerate of is: What can we do that is reasonable in terms of the price that our customers pay. If you make requirements for solar, and increase those in time, will that pass on costs to those who aren’t willing to pay for it?”

While Wheeler said Consumers does not yet have a firm expansion plan going forward and is looking to the work group for guidance, DTE is more explicit:

“DTE Energy supports renewable energy. We believe renewable energy should and will be a growing part of the company’s diversified generation portfolio, regardless of whether recommendations are made by the MPSC Staff Report,” spokesman Alejandro Bodipo-Memba said in an email. “However, our experience has proven that large-scale wind generation is the best renewable investment for Michigan for the foreseeable future.”

Bodipo-Memba said solar will not likely by cost effective “until sometime beyond the mid 2020’s.”

“For these reasons, DTE does not believe that it makes sense to expand solar programs in Michigan and we do not support extending or increasing cross-customer subsidies for solar,” he added. “We will continue implementing our current small-scale solar pilot program, allowing us to be ready if technology breakthroughs ever emerge to make solar cost-competitive for our customers.”

“If an informed customer still wants to make a solar investment, we respect that decision and will facilitate interconnection to our electrical system. We support paying solar customers for the full and fair market value of the excess energy they produce. However, we also believe that solar customers should bear the true and actual costs of their investment and their use of the electrical grid and not impact other customers by their decision.”

One of the key issues playing out in other states that the working group looked at is determining the value of solar power. The group looked at formulas developed in Austin, Texas, and in Minnesota, a state advocates often point to for progressive solar policies.

Dulzo said that any figure based on a value-of-solar formula is going to vary by location based on the amount of sunlight, the amount of coal burned for energy and how well the system has been established.

The external costs for not going with solar — for example, the social cost of carbon — are not calculated in a net-metering formula. Should one of the Michigan utilities move forward with a value-of-solar payment plan, that would first need to go before the MPSC in a contested case to establish a formula and price, Baldwin said.

Douglas Jester, a consultant with mid-Michigan-based consulting firm 5 Lakes Energy, said while Michigan may not have the best sun conditions in the country, solar growth here has been stunted by a lack of strong policy outside of net metering. As evidenced by Consumers and DTE, cost is also playing a role. Without a flurry of activity, there isn’t much experience to go on here, he said.

“We haven’t had all the learning-by-doing experience that tends to help with permitting costs and other things,” Jester said.

Dulzo, of the Michigan Land Use Institute, said “solar is underestimated in Michigan because a lot of people think it’s too cloudy and we’re too far north.” That argument “evaporates,” he said, when you look at Germany, a nation leading in solar development that has even less favorable sun conditions than Michigan.

Dulzo said that outside of a solar standard like Ohio’s or Minnesota’s, the state could offer more tax incentives, personal property tax adjustments or other financing opportunities that could expand rooftop solar.

“None of that is happening in Michigan at the state level,” he said. “That is a really serious problem.”

While the MPSC staff report will be limited in its ability to order any changes, Jester hopes it at least will offer a path forward.

“I’m hoping the staff report will identify a better program designed for the utilities’ renewable energy program solar components and that the utilities will voluntarily adopt that,” he said. “Secondly, that we will be able to establish some form of a tariff treatment that will be fair to solar generators in contrast to the situation we have now where it tends to be undervalued, sometimes by a lot.”

Dulzo said those in Michigan who install rooftop solar are generally people “with a lot of money and don’t care if they get their investment back. That’s great, the whole early adopter thing, but that’s not what can work in the long run.”

The MLUI is a member of RE-AMP, which also publishes Midwest Energy News.