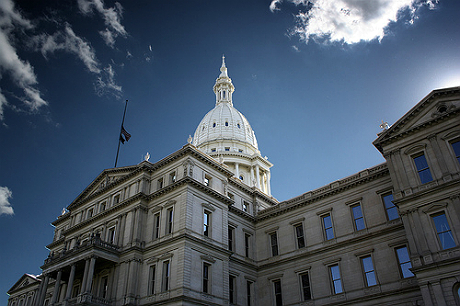 A Michigan lawmaker wants to expand the state’s definition of renewable energy to include more fuel made from municipal and industrial solid waste.

State Rep. Aric Nesbitt, a Republican who represents a district near Kalamazoo, is sponsoring legislation that would eliminate what he calls “unnecessary burdens on the appropriate use” of burning solid waste, and would expand the definition to include byproducts like petroleum coke.

Opponents have called it a “gerrymander” of the definition of renewable energy at a time when the state’s Renewable Portfolio Standard of 10 percent from renewables is set to expire next year.

Nesbitt says it’s a logical alternative to storing the materials in landfills.

“This is a very important discussion to have,” said Nesbitt, who chairs the state House Energy and Technology Committee. “There’s a lot of picking winners and losers. I think we need to really decide on what course and what standard we need to go for.”

But environmental groups say that logic is backwards: That burning solid waste, which would include non-renewable materials like plastics and byproducts like petroleum coke, flies in the face of the 2008 state law defining renewable energy. And doing so would still be emitting air pollution.

“Incinerating hazardous waste and calling it clean is downright indefensible. The incineration process emits carcinogenic toxins and harmful air pollution that put the health of Michiganders and our air and water on the line,” Lisa Wozniak, executive director of the Michigan League of Conservation Voters, wrote in a June 2 op-ed on MLive.com.

“We simply cannot afford to incentivize incineration of hazardous waste. We cannot allow Michigan legislators to gerrymander a definition of clean, renewable energy to make room for more pollution.”

Nesbitt counters his critics by saying it’s “disingenuous for them to say they’d rather it go in landfills than used for something productive like energy.

“I find it extremely troubling that some groups do not believe we should be encouraging or allowing for the development of utilizing our waste stream or preventing it from going to landfills. If they want to support increased landfill use, that can be their position.”

Specifically, the legislation would allow for pyrolysis technologies in generating energy, which the state House Fiscal Agency says “generally refers to a high-temperature, oxygen-free process to make biofuels from a wide range of agricultural, industrial, and municipal solid waste.” The legislation would also include such carbon-based feedstocks as coal and petroleum coke, or petcoke, to be processed at a pyrolysis facility.

Incinerators are not included as a renewable energy system unless they qualify as such under the state’s Natural Resources and Environmental Protection Act of 1994 and were brought online before the 2008 renewable energy law took effect.

Baldwin said MPSC staff have issued an opinion on projects that incinerate pellets that include materials like plastics or that are non-recyclable in addition to what it considers renewable biomass, like wood and paper.

“Only the renewable part would receive a renewable energy credit,” Baldwin said.

The U.S. Environmental Protection Agency states on its website: “Because no new fuel sources are used other than the waste that would otherwise be sent to landfills, (municipal solid waste) is often considered a renewable power source. Although MSW consists mainly of renewable resources such as food, paper, and wood products, it also includes nonrenewable materials derived from fossil fuels, such as tires and plastics.”

James Clift, policy director for the Michigan Environmental Council, said his organization supports the use of renewable credits for the renewable portions of these “pellet” projects, as MPSC staff have said, but that it is opposed to the idea of including hazardous waste as renewable energy.

“We don’t believe that category belongs in renewable energy at all,” Clift said, referring to various versions of petcoke, used solvents and other industrial hazardous byproducts.

While Clift said the Michigan investor-owned utility DTE Energy burns petcoke for energy at its Monroe plant near Detroit, DTE “figured out how to do that under air pollution control permits. Fine, that’s permissible under law, but it doesn’t make it renewable energy.”

While Clift said he’s unaware of any analysis done on the amount that could qualify as renewable energy if the law is passed as written, “If there’s a category of burning things like petcoke in Monroe, that could represent a lot of megawatt hours of production.”

According to the U.S. EPA, there are nearly 90 operational municipal solid waste-fired plants in the country generating about 2,500 megawatts, or about .3 percent, of U.S. power generation. “However, because construction costs of new plants have increased, economic factors have limited new construction,” according to the EPA’s website.

Ted Michaels, president of the Recovery Council, fully supports solid waste as a form of renewable energy, regardless of whether it’s made of biomass materials like wood or non-renewable products like plastic. However, his organization does not have a position on considering hazardous materials like petcoke.

“Waste-to-energy facilities recover valuable energy from trash after efforts to reduce, reuse and recycle have been implemented by households and local governments,” Michaels said.

As for pollutants that are emitted in the process — such as sulfur dioxide, nitrogen oxides and trace amounts of mercury and dioxins, according to the EPA — he said, “That’s where the air pollution standards come in. Most facilities operate below the permit levels.”

Burning non-renewable waste, namely tires, played out in a contentious fight four years ago in Illinois. The state House there passed legislation in 2010 that would have added the practice as a renewable form of energy. It never received final approval from the Senate. Moreover, the incinerator company, Geneva Energy, stopped the practice last year as part of a legal settlement after the EPA cited the company for air-pollution violations and a filed a civil rights complaint.

Barry Matchett, co-legislative director and policy advocate at the Chicago-based Environmental Law and Policy Center, said the public “by and large” does not respond well to attempts to reclassify polluting products and that, at this point, waste-to-energy projects aren’t competitive economically. Such projects are also known for releasing dioxins, often in low-income communities.

“There’s a lot of scientific evidence that waste-to-energy projects are very unhealthy and are not good for public health. It’s clearly not renewable energy, which is, by its very definition, generated without the need to burn things,” Matchett said, though he added that there may be promise for certain biomass materials when it’s more economically feasible.

Matchett also dismissed the argument that it’s a binary choice between burning it and land-filling it.

“Heavily industrialized and advanced nations throughout Europe have been able to reduce their waste stream down to almost nothing through recycling and reutilization of products as opposed to burying it,” he said. “The landfill is almost a uniquely American approach to dealing with waste.”

Rep. Nesbitt said two hearings have been held on the proposed legislation and “we continue working through some of these discussions” in the Energy and Technology Committee. It’s unclear when or if the bill will move to the full Legislature.

The Michigan League of Conservation Voters, Michigan Environmental Council and the Environmental Law and Policy Center are members of RE-AMP, which also publishes Midwest Energy News.