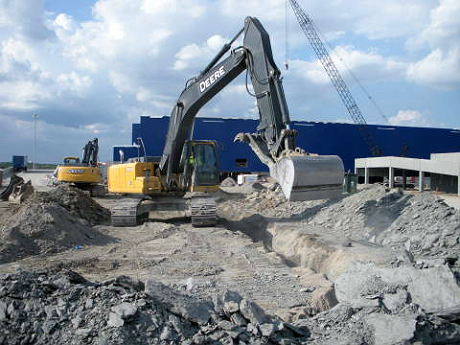 An Ikea store under construction outside Kansas City will be the chain's second U.S. store with geothermal heating and cooling system. (Photo via Ikea)

While Ikea makes headlines for its rooftop solar arrays, the retail chain is emerging as a leader in another clean-energy technology.

An Ikea store under construction in the Kansas City area is expected to meet all of its heating and cooling needs with a geothermal system — reportedly the biggest in a three-state region, and among the largest nationwide.

The company also plans to put what will be the second-largest solar array in Kansas on the store’s roof.

“The geothermal system takes care of the energy to heat and cool the building,” said IKEA spokesman Joseph Roth. The company’s Denver-area store has had a geothermal system operating since the store opened in 2011.

“There were challenges understanding the dynamic of it,” Roth said. ”It’s working well enough that we felt good about building a second one.”

The system just completed in Merriam, Kansas, a Kansas City suburb, will control temperature in the 359,000-square-foot store by pumping a liquid coolant underground, where the temperature is about 55 degrees all year, and returning it to the store’s heating and cooling system.

To move enough coolant to meet the building’s needs, 180 boreholes, six inches in diameter and 600 feet deep, were drilled in Ikea’s 19-acre parcel of land. The holes house a network of underground pipes through which 36,000 gallons of the coolant – a water-based antifreeze solution – will move between the ground and the store.

A system of 64 forced-air heat pumps will move the heated and cooled air through the building. Five hot-water heat pumps will provide potable water for the store’s bathrooms and restaurant operations.

The 869-kilowatt solar array is expected to produce more than 1.3 million kilowatt hours of electricity yearly, from 2,850 solar panels. Although a system that size can meet the electricity needs of 128 typical households, Roth said it’s anticipated it will provide only between 20 and 40 percent of the power the store will require.

The panels will feed power directly into the store’s electrical system, and will not produce enough power to feed into the larger power grid, Roth said.

Ikea makes a point of building and operating its stores with minimal energy use, Roth said. And to that end, it has put solar panels on about 90 percent of its U.S. stores.

For example, the company expects its stores to be using only high-efficiency LED lighting by 2016, he pointed out.

Ikea’s clean-energy initiatives go beyond the walls of its retail outlets. In April, the company announced it was purchasing Hoopeston Wind, a 98-megawatt wind farm under development in Illinois. The wind farm would not supply power to any of Ikea’s stores. However, the purchase will contribute to the company’s aim to produce as much power as it consumes by 2020.

The wind farm, purchased from Apex Clean Energy, is expected to be operational in the first half of 2015.

As a privately-owned company, Roth said, IKEA can choose to invest in sustainability “regardless of how quick the turn-around is.”

Nevertheless, he said, “We expect a return within a certain period of time. It’s not as long-term as most people would think.”