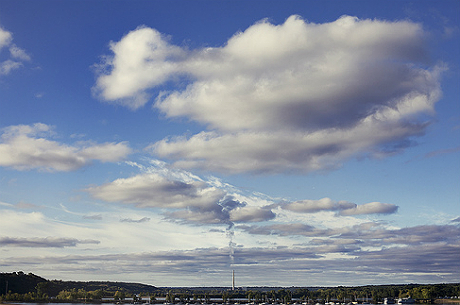 That was the underlying message from two Minnesota agencies in recommending the Public Utilities Commission adopt federal “social cost of carbon” values to help guide utility decisions about electric generation.

A law enacted by the state more than two decades ago requires the PUC to establish “externality” values for carbon dioxide and other power plant pollutants to help shape planning decisions. The commission this year ordered an update to some of the values, including CO2, at the request of clean energy advocates.

Minnesota’s Department of Commerce and Pollution Control Agency submitted a joint recommendation to the commission last week after months of study and input from utilities, big power users, environmental and clean energy advocates.

Not surprisingly, there was little consensus among the parties. In the end, the state agencies determined the state could do no better updating its 17-year-old CO2 value than the social cost of carbon (SCC) values developed by a federal interagency working group and used in federal rulemakings to estimate climate benefits of carbon emission reduction efforts.

“When the commission first investigated CO2 externality values, there were no federal values for this global pollutant; with the SCC, there are now federal CO2 values available,” the agencies said in a joint filing. “It is not an efficient use of ratepayer funds to hire a consultant to develop a CO2 externality value when values developed by the federal government exist.”

Adopting the midpoint of the federal SCC range of values would put a price of about $36 on each ton of carbon dioxide emitted from Minnesota power plants in 2015.

The value represents a dollar estimate of the incremental damage caused by each ton of carbon emitted from a power plant stack and represents a nearly tenfold increase from the current CO2 value used by state regulators.

It’s a figure that could loom large in future decisions about the state’s energy mix.

Whatever values are ultimately established by the PUC are plugged into financial models used by utilities that help guide various generation planning decisions, such as determining the fuel source for a new power plant or when to shut down or continue running an older coal-fired power plant.

For instance, the state’s largest electric utility, Xcel Energy Inc., will submit a study in early January that examines whether to continue operating two of three units at its 2,400-megawatt Sherburne County coal-fired power plant. The so-called Sherco plant is the largest coal-fueled power plant in the state, and environmental groups such as the Sierra Club have pressed to have the two oldest units replaced by cleaner energy sources.

Leigh Currie, a staff attorney for the Minnesota Center for Environmental Advocacy, said the updated externality values for CO2 and other criteria pollutants should play a role in helping determine the future of Sherco.

“Those figures, when they come out, should factor into that decision,” she said.

In an emailed response to questions, Xcel said it regularly considers external costs using a range of values when analyzing resource decisions, such as whether to build a new power plant. And the commission has used existing values for the past 15 years.

But the commission has “a lot of discretion on how much weight to give them and to date the values have not had a significant effect on the Minnesota Public Utilities Commission’s decisions,” Xcel said.

Minnesota initially established CO2 values in 1997. While the value has been updated annually for inflation since 2001, there has been no further effort to quantify the damages caused by carbon pollution from power plants.

A coalition of environmental groups and clean energy advocates successfully petitioned the commission last fall to reopen a docket and update values for CO2, sulfur dioxide and nitrogen oxides and establish a new value for fine particle pollutions, or soot. The groups said existing values for the pollutants — including the CO2 range of value of 42 cents to $4.37 a ton — were “outdated and no longer scientifically defensible.”

The groups instead pointed to a study by University of Minnesota economists that put total damage to human health and the environment from Minnesota power plants at $2.2 billion, with more than half the amount representing damages associated with climate change.

The process of updating pollutant values, and specifically CO2, has taken on heightened interest because it comes as U.S. EPA is in the midst of finalizing the first ever rules for the regulation of CO2 from new and existing power plants.

The EPA rulemaking has raised questions about how federal greenhouse gas regulations would fit with Minnesota’s externality statute.

In comments filed last month, the Minnesota Large Industrial Group, an ad hoc coalition of big electricity users, said the scope of the commission’s investigation of pollutant values must incorporate impacts of recent and pending legislative and regulatory changes such as EPA’s proposed carbon rules.

The changes “are presumably an attempt to force utilities to internalize at least a portion of the social costs of pollution,” the group said in its filing. “Failing to consider the externalities statute in light of statutory and regulatory modifications could result in double-counting in the ultimately recalibrated values.”

Currie, the environmental lawyer, said the commission-approved CO2 value should be viewed as a complement to any federal regulations in the same way that already-established values for criteria pollutants are used alongside Clean Air Act regulations that limit emissions of the pollutants.

Even when federal carbon regulations are implemented, there will still be power plants putting off greenhouse gas emissions, and the CO2 externality values established by the PUC will spell out the cost of damage associated with those emissions.

Minnesota’s largest electric utility, meanwhile, said it was “premature” to limit the scope of the investigation to the federal social cost of carbon and said the values present “significant procedural and methodological challenges.”

Xcel favors an alternative recommendation floated by the state agencies, which involves hiring a consultant to evaluate CO2 externality values. Doing so, the company said, “allows for the assessment of a broad range of alternative approaches that relies on a full examination of the current state of science to develop the record — and which would still allow for consideration of the SCC.”

For now, the Minnesota debate over CO2 externality values is focused on several broader-scope questions, such as whether to develop values for other greenhouse gases including methane; whether to consider damage caused by climate change solely within the state or beyond state lines; and whether to factor in nonhuman health impacts.

The PUC issued a request for comments on the agency recommendations yesterday and, given that the matter will be contested, the commission will likely assign the case to an administrative law judge.

At least one Minnesota utility, Fergus Falls-based Otter Tail Power Co., suggested a lively debate will be had in the months to come.

“We expect the record will be robust,” the company said in a filing. “The parties have very different perspectives and they will bring to bear the evidence and factual support, including expert testimony, that they feel is appropriate to support their distinct perspectives.”