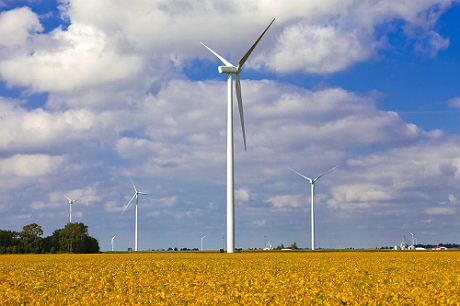 With little discussion or fanfare, Ohio legislators have essentially put a stop to new wind farms in the state, industry experts say.

Iberdrola’s Ohio wind farm projects include the 304 MW Blue Creek Wind Farm in Van Wert and Paulding County. About ten of its Ohio projects are fully permitted, but not yet constructed. The new law lets already-permitted projects continue, but only if no amendments to the permit become necessary.

Two additional projects in Putnam County and Van Wert County have not yet been permitted. Those probably will not go forward as a result of HB 483.

“It would take one of the projects from 50 turbines to 7, and another project from 75 to 3,” says Thumma. “The economics are not going to work if you have such reduced projects.”

For any new commercial wind farms, HB 483 will now require a setback of 1,125 feet from the tip of a turbine’s blades to the nearest property line. In practice, that will require setbacks of about 1,300 feet from each turbine’s base.

The new law makes an exception for existing facilities and ones that had already gotten permits. For those projects, the Ohio Power Siting Board measured the 1,125-foot setback to the outer wall of the “nearest, habitable, residential structure” on neighboring property. Otherwise, property line setbacks were roughly 550 feet.

HB 483 is part of Kasich’s mid-biennium budget review, and most of the law deals with tax cuts, spending for social programs, and other matters. An earlier version of the bill would have doubled the maximum penalties for violations of gas pipeline rules. The Ohio House Finance Committee deleted that provision.

The wind setback provision appeared for the first time when the Ohio Senate Finance Committee reported the bill out in May.

“There was literally no public testimony” on the new setback provision, says Dayna Baird Payne. The Columbus lobbyist represents the American Wind Energy Association, as well as Iberdrola.

Indeed, the Ohio Senate spent barely ten minutes discussing the last-minute changes before passing the bill on May 21.

Issues regarding setbacks should be “debated [in] a reasonable manner, not just tucked away without any public discussion in a bill,” Skindell continued. “I’m dumbfounded.”

“Here we’re going to have a quarter-mile setback from a property line…for wind turbines,” Skindell added. “We only have a 100- or 200-foot setback for an oil or gas well being drilled next to a home.”

In response, Cincinnati-area Republican State Senator Bill Seitz railed against turbines’ noise, the possibility of snow being thrown from blades, and flicker that “would mess up even Tiger Woods’ game.”

“We are conforming setback law for wind turbines, making them play by the same rules that everybody else plays by,” Seitz insisted. “We are still being very friendly to the future development of wind farms in Ohio.”

“It’s really a bill that has the effect of making wind an uneconomic resource in Ohio,” Thumma says.

“It does kill all future wind development in the state of Ohio,” agrees Payne. Until now, Ohio has had two setbacks for wind turbines—one from property lines and one from residences or “habitable structures.”

Compared to other states, the property line setback was “right in the middle of the pack,” Payne says. With one unusual exception, though, Ohio’s setback from residences was “the toughest in the country.”

Now HB 483 “takes the residential structure setback where we’re the toughest in the country and applies it to property lines,” Payne says. That more than doubles the property line setbacks and in some cases increases them “almost threefold.”

If HB 483’s setback had applied to the Blue Creek Wind Farm, only about a dozen of its 152 wind turbines could have been built.

“You can’t lease that much land for only 12 turbines,” Payne says. “It would be cost prohibitive.”

“These are large capital projects,” stresses Thumma. To justify that expense, wind farms need sufficient turbines to produce enough electricity so they can make a profit.

Figuring out where to place each turbine is already a challenge. “First of all, it has to be windy at that site,” explains Thumma. “Even within hundreds of yards of each other, wind can be slightly better than at other locations.”

“You have to maximize that within the concept of public safety” and other factors, Thumma continues. That means accounting for general safety, possible ice throw, sound levels, and potential flicker effects. Analyzing all those factors requires substantial studies and engineering.

With additional setbacks from property lines, the siting job becomes “essentially impossible,” says Thumma. “You’re talking millions of dollars that’s been invested in all these projects that would be unrecoverable.”

Commercial wind farm developers aren’t the only ones who will lose out. Projects often use local labor to build and maintain equipment.

“This is a job killer,” Skindell said when he tried to get the provisions removed from HB 483.

“It takes about an acre out of production, and they’re getting a lease payment,” explains William Spratley, executive director of Green Energy Ohio. “That’s a true cash crop to the farmer to be paid that.”

Kasich signed SB 310 despite opposition from multiple consumer, business, and environmental groups. The Office of the Ohio Consumers’ Counsel and the Ohio Manufacturers Association both predicted that the “inevitable outcome” of SB 310 “will be higher electricity costs for businesses and residential customers.”

Getting hit with the new wind setbacks plus the overall impacts of Senate Bill 310 is “kind of a double whammy,” says Spratley.

Among other things, SB 310 eliminates the in-state requirement for renewable energy. The law also broadens the scope of what counts under the standards.

Both changes will likely lower demand for Ohio-based wind energy and other forms of renewable energy.

“You would have Ohio ratepayers paying for existing resources in other states and not getting any benefit for it,” Thumma says.

Moreover, it’s not clear whether even the relaxed standards will kick back in after the two-year freeze.

SB 310 sets up an Energy Mandates Study Committee. However, the law defines the committee’s tasks narrowly. And it announces an intent to pass future legislation to reduce “the costs of future energy mandates, if there are to be any.”

Even if the freeze is just temporary, the uncertainty will disrupt business planning. That will increase the business risks for existing and planned clean energy projects. Potential new projects will become even more uncertain.

The uncertainty “over time is just going to dampen investment,” says Thumma. Ohio will become “just too risky a place” for companies to invest millions in capital resources.

The freeze, the study committee, and other provisions send “a signal that renewables aren’t going to happen in Ohio—certainly in the near term and under the structure of SB 310,” Thumma says.

“It’s the worst possible law you could write,” Thumma adds.

Green Energy Ohio is a member of RE-AMP, which publishes Midwest Energy News.